NEW YORK CITY — If you've ever given blood in the city, you know the New York Blood Center isn't shy about soliciting donations in times of scarcity.

There are the emails, the texts, and the phone calls.

But blood isn't the only thing New Yorkers can donate — nursing mothers can give their surplus breast milk, too.

There's a demand for that milk because not all moms who want to breastfeed can provide their own for a host of reasons. For example, if the baby is born prematurely, the mother's underdeveloped mammary glands may not produce enough, or any, sustenance.

In past years, New York City moms seeking donor breast milk had three options: they could pay expensive shipping fees to buy it from milk banks in other states; they could purchase milk directly from other mothers online, at the risk of possible contamination; or they could collect inconsistent donations from their extended social networks.

In 2016, a team of women opened the New York's first breast milk bank, and in a few months a new system of donors, recipients and health care providers has grown to provide women in the five boroughs with a safe, consistent and convenient supply of milk.

► Breast milk is more than just food for some babies; for premature infants, it's medicine.

The debate over whether breastfeeding is better than formula for babies may never end, but there's a greater consensus among the medical community about human breast milk's benefits when it comes to pre-term infants.

”All species of mammals make a specific kind of milk for their young," said Julie Bouchet-Horwitz, a family nurse practitioner and lactation consultant. Cow's milk, the basic ingredient in most infant formulas, "is great for calves, but it's a foreign food for humans," she said.

That's why pre-term infants and their immature digestive systems can develop an immune or inflammatory response to formula. And that may lead to "every neonatalogist's nightmare," in Bouchet-Horwitz's words: a potentially lethal condition called necrotizing enterocolitis (NEC).

In cases of NEC, tissue in the small intestine is sloughed off or begins to die, making the absorption of nutrients difficult. In the worst scenario, which requires surgical intervention, the intestine develops a hole admitting waste to the baby's bloodstream or abdominal cavity and the child suffers from digestive problems for life.

”We can drastically reduce that rate if we give the baby what Mother Nature intended them to have, which is mother’s milk," Bouchet-Horwitz said.

Experts say you can prevent one case of NEC for every six preemies you feed breast milk instead of formula.

A case of NEC can cost Mount Sinai Hospital as much as $300,000, on top of other hospitalization-related expenses.

Breast milk prescribed by a doctor may reduce the incidence of NEC by at least 40 percent, Dr. Juliano said.

“If you apply that to our populations of [extremely low-weight, prematurely-born] babies, we would be, at the very least, saving upwards of half a million dollars a year," she said.

The doctor and her colleagues at Mount Sinai have submitted a proposal for a donor milk program they hope to establish at the hospital's main campus within a year.

The New York Milk Bank in Hastings-on-Hudson is working to supply the donor milk for Mount Sinai's initiative.

Like any other milk processing plant, it pasteurizes, bottles and tests its inventory for bacterial contamination.

Milk! Processing milk today with help from Sandra and Kelcie. Help us process more. Give today at www.nymilkbank.org. Click on the "contribute" button to make your holiday tax-exemption gift. #donormilksaveslives #donormilk #pasteurized #newyorkmilkbank #give

Bouchet-Horwitz, who serves as the bank's executive director, said new donations and accounts have continued to stream in since the nonprofit organization's facilities opened in June.

That's because only three of the nation's 23 breast milk banks — including Ohio Health Mother's Milk Bank and Mothers' Milk Bank Northeast in Massachusetts — are licensed by the Human Milk Banking Association of North America to distribute in New York, and the New York Milk Bank can undercut other shipping prices for in-state deliveries.

The milk bank is currently filling breast milk prescriptions for 59 women in New York state, including 10 women in New York City. It supplies milk to neonatal intensive care units at Montefiore Medical Center-Weiler Hospital in The Bronx and five other hospitals across the state, according to donor coordinator Erica Hankinson.

► Members of an all-women's motorcycle club deliver milk to and from the bank.

"Our favorite [delivery] method, however, is the Milk Riders," Bouchet-Horwitz said, who uses a WhatsApp group chat to summon her volunteer couriers.

The Milk Riders are members of the Sirens, the city's largest women's motorcycle club, founded in 1986. The Sirens raise money for small organizations focused on women's health issues every year, in advance of a benefit ride honoring a member who died of AIDS, but the plan didn't originate with them.

"Julie Bouchet-Horwitz called me up out of the blue at the beginning of year with this idea of using motorcycles as a delivery service for milk," club president Jen Baquial said.

The milk bank executive director had just learned about the riders of Britain’s Nationwide Association of Blood Bikes, who volunteer a few evenings a week to courier medical supplies around the country.

"Then my husband and I were stuck in traffic, and I just idly saw a motorcyclist illegally traveling right up the middle of the lane," Bouchet-Horwitz said. "I thought, ‘Gee, motorcyclists driving in and out of Manhattan — now that would be a great thing to do.”

That's the task the milk bank assigned Sirens Sandra Fleming, Samantha Pierce, Kim Wetzel on a Friday morning earlier this December. The bikers stopped by an Upper West Side breastfeeding resource center called the Upper Breast Side, loaded 18 pounds of bottled breast milk in insulated cooling pouches into their saddlebags, and zoomed up Amsterdam Avenue toward the milk bank. 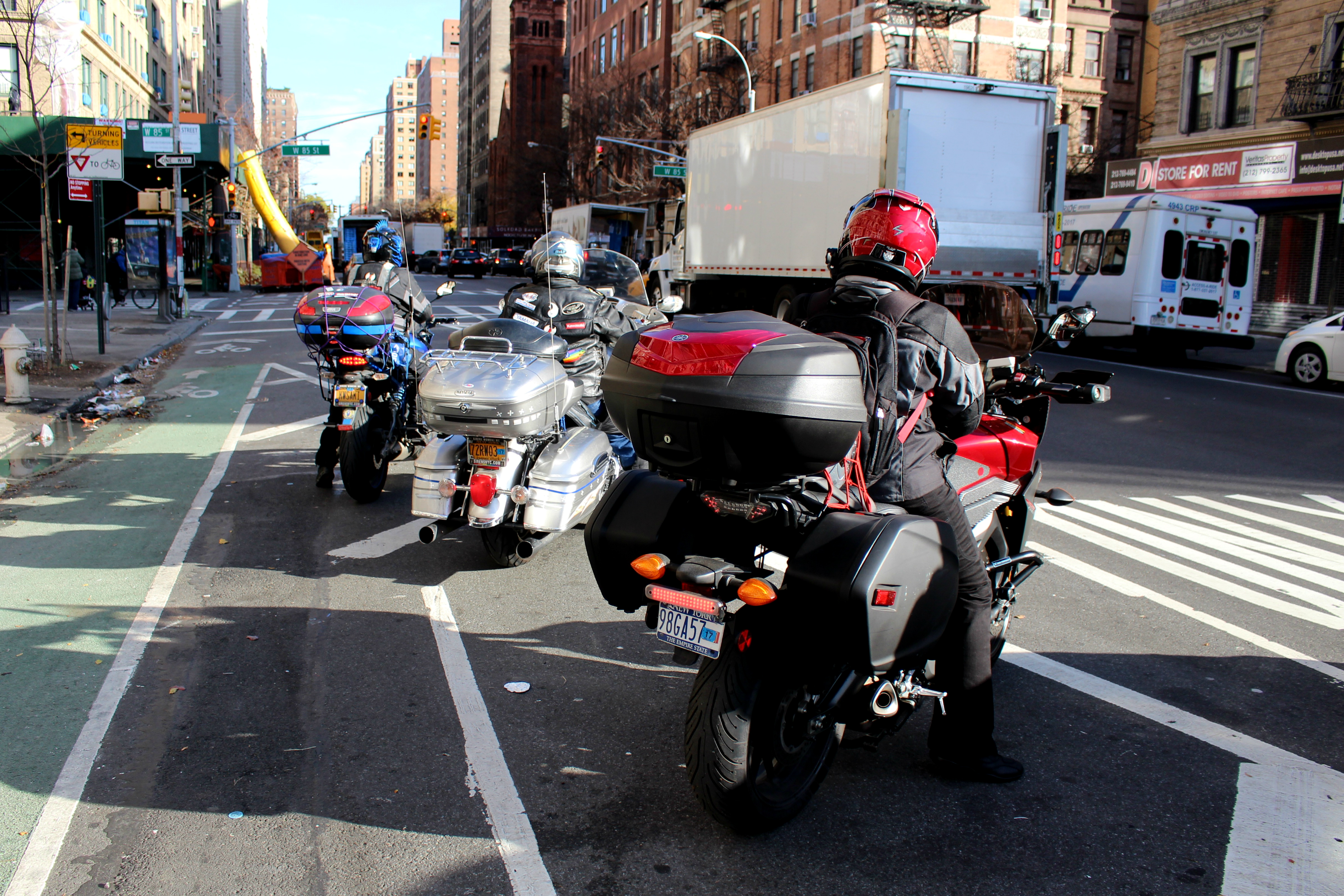 ”We pay their travel expenses, but they volunteer their time," Bouchet-Horwitz said, "so we’re very grateful for them, because ... it’s a great benefit to us and our hospitals love that they can have same-day service."

”There’s something special about being able to help other women,” said Sirens pledge Molly Moser, whom Baquial described as particularly enthusiastic about the project. "And [there's] something sort of incongruous between women on big, loud, noisy bikes and helping babies, that I was especially tickled by."

► Donors can drop their milk off at collection sites, or "depots," around the city.

There are five sites across Manhattan, Brooklyn, The Bronx and Staten Island where women can drop off their breast milk donations for storage that have licenses from the state Health Department and compact freezers at temperatures no warmer than -4 degrees Fahrenheit. Those include the Upper Breast Side, Columbia Midtown Pediatrics, a pediatric practice in Park Slope, Montefiore in Morris Park, and Staten Island Breastfeeding in New Dorp.

The milk bank wants to expand that network into Queens and open depots in doctor's offices and retail stores as well as the lactation rooms in city offices that were mandated by a bill passed in August.

Upper Breast Side founder Felina Rakowski-Gallagher, who works with the New York Milk Bank, said she was eager to join.

“I said yes from the moment that I was approached to be a milk depot, which is basically making it that much easier for a woman who wants to donate milk," she said. "Instead of staying at home, waiting for the UPS or FedEx guy or schlepping it to the post office and getting tortured on line there, they can simply bring it here.” 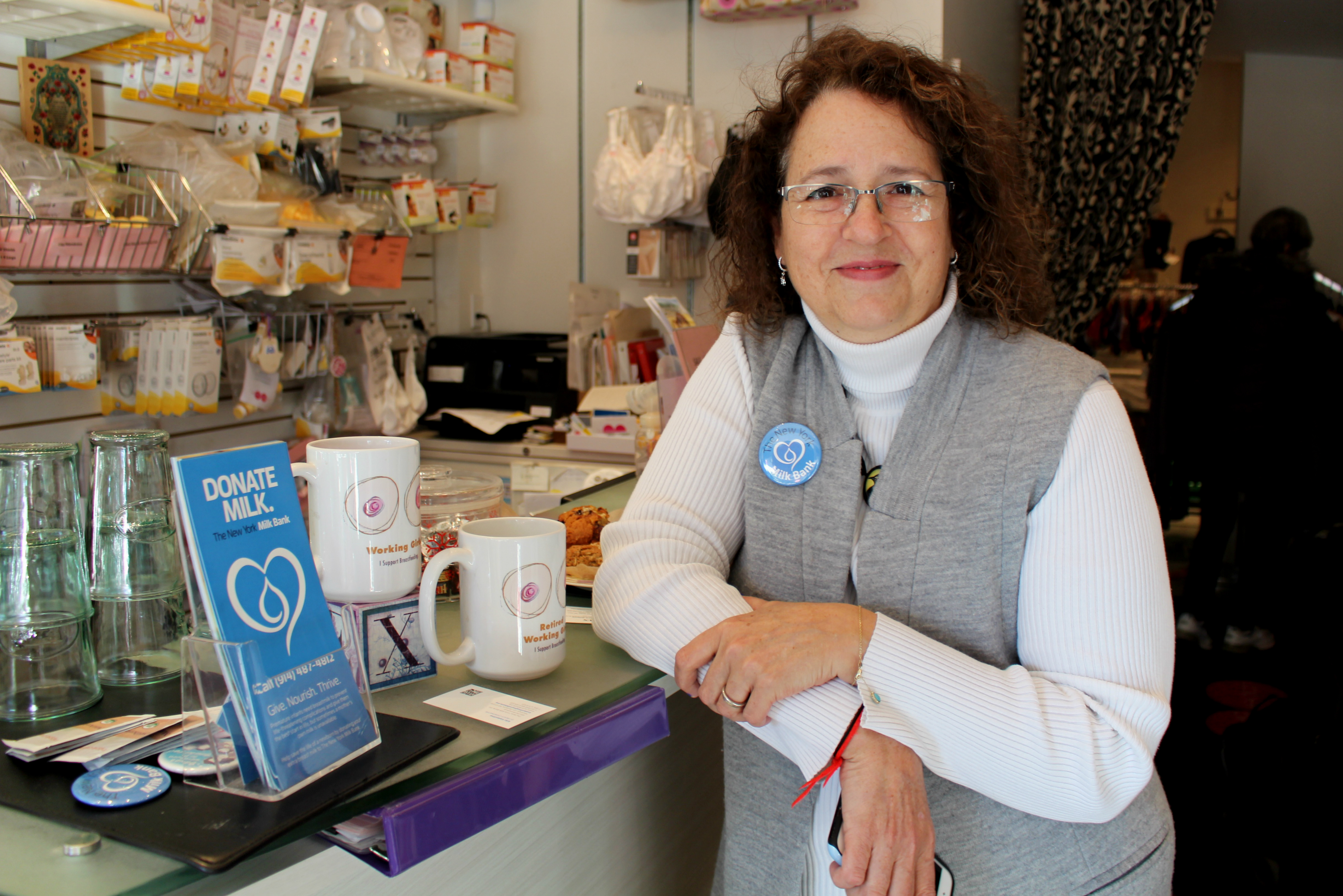 Donors like Erin Lien Aidi say that, in spite of the paperwork, blood tests and medical release forms the milk bank requires of applicants, it's still easier to make their contributions through the nonprofit than coordinating with private families through informal Facebook groups that have sprung up in recent years.

About 100 women in New York City have donated so far.

Of her motivation for contributing, the Upper West Side resident said, "By pure luck, I have two healthy babies and a crazy abundance of milk. Going through the process of pumping, storing and transporting it for families that didn't get dealt the same feels like the deepest way I can express my gratitude for what our family has."

► Breast milk isn't cheap, but advocates are working to make it more affordable.

At $4 an ounce, breast milk costs more than 36 times the average cost of formula. The cost is the same for individual patients and hospitals.

Part of that money goes to subsidize milk bank operations, which are growing to accommodate donor interest. (The organization is, at present, trying to raise $300,000 on Crowdrise to pay for new freezers and another pasteurizing machine.)

When the milk bank opened its first depots in April, Bouchet-Horwitz said, "We received four times as much milk as we expected ... so we started with two freezers and we just ordered our ninth freezer, and they’re full to capacity. We’re pasteurizing as fast as we can."

But many young families can't afford to buy that milk and hospitals won't prescribe it because Medicaid and private insurance companies don't cover the cost.

A bill that passed the state Senate and Assembly this year would have secured Medicaid dollars for mothers who can't nurse their premature infants and choose to feed their babies donor breast milk; the legislation argues it will save New York taxpayers the money Medicaid currently spends on the complications that arise during neonatal care.

Gov. Andrew Cuomo vetoed the bill on Nov. 28 in objection to its phrasing, Bouchet-Horwitz said.

The bill, which recommended donor milk coverage for any infant who "requires nourishment by breast milk," was a "little bit too broad" for the state government's budget, the advocate said.

The governor's office did not immediately respond to a request for comment.

Bouchet-Horwitz and her allies continue to push ahead: "We already have a committee going on right now to start to work on the edits," she said.