GOWANUS — Longtime tenants of a Fourth Avenue walk-up have endured collapsed ceilings and flooded kitchens due to harassment by their landlord, and advocates who've fought to help them urged the city Tuesday to pass laws to prevent similar abuses in Gowanus and other neighborhoods targeted for rezoning.

Rent-regulated tenants on Fourth Avenue and Butler Street took visitors on a tour of their dangerously run-down apartments in the hope of shining a light on the harassment they say they've faced from their landlord, who's racked up more than 70 building violations as he's added two new floors to the building.

A representative for the landlord, Zev Baum 1 LLC, could not be reached for comment Tuesday.

"We're just scared. The neighborhood is changing every day. I just want to live comfortably," said resident Alfredo Rivera, who showed visitors a ceiling fan that crashed to the floor in his apartment recently. Rivera, his 84-year-old mom, and another family are the only tenants left in the eight-unit building, where other residents either took buyouts or fled because the constant construction and lack of repairs were unbearable. 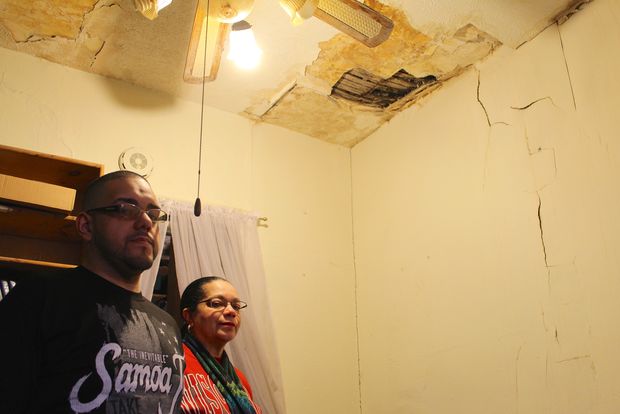 Justin and Mildred Lopez stand near a gaping hole in the ceiling of their rezoned Fourth Avenue rent-regulated apartment, where the landlord has harassed tenants by doing construction and failing to make repairs, advocates say. New legislation could create better protections for tenants in rezoned areas. Photo: DNAinfo/Leslie Albrecht

Tenant organizers with the social justice nonprofit Fifth Avenue Committee say the plight of Rivera and his neighbors has been all too common along Fourth Avenue in the wake of the 2003 North Park Slope rezoning that allowed the construction of taller market-rate buildings, encouraging landlords to push out rent-regulated tenants in existing properties.

To stop the same thing from happening in Gowanus if the neighborhood is rezoned to allow more residential development, activists want the city to pass a set of laws to protect tenants from harassment and to stiffen penalties for landlords. The legislation, now in committee at the City Council, would even keep landlords from getting building permits if they have a track record of harassing tenants.

"Here we are 13 years later still dealing with the after effects of something the city of New York unleashed," said Fifth Avenue Committee Executive Director Michelle de la Uz. "We should prevent these problems rather than deal with these problems after the fact." 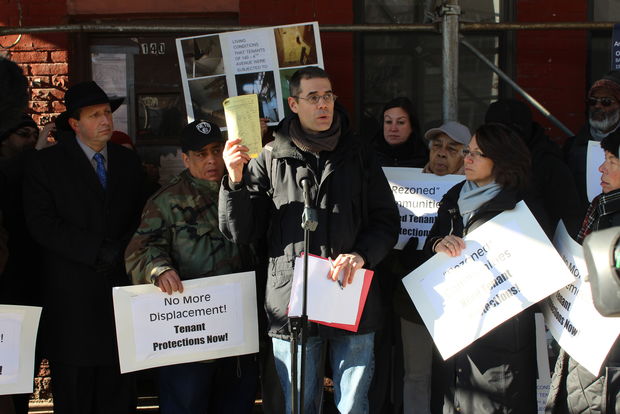 She and City Councilman Brad Lander, a former director of FAC, said Tuesday that advocates — and then-City Councilman Bill de Blasio — had urged the city to require affordable housing and anti-displacement measures during the 2003 rezoning of Fourth Avenue, but both efforts failed.

Today the avenue is lined with construction sites building market-rate housing, while dozens of rent-regulated apartments have been demolished and longtime tenants driven out of the neighborhood.

Advocates worry a similar scenario could play out during a rezoning of Gowanus, which could add density along Third Avenue and Union Street, home to much of the dwindling supply of rent-regulated housing in the area.

If the city doesn't pass the new tenant protection laws before a Gowanus rezoning is approved, advocates want to create a special district in Gowanus where landlords would have to prove they're not harassing tenants before receiving a building permit.

"What we need to do is get those new policies in place so the next time there’s a rezoning, in Gowanus or anywhere else in the city, those protections are in place."