By Camille Bautista |&nbspDecember 7, 2016 3:35pm
@CamBautista
Twitter Facebook Email More
Musician Tom Montagliano's 16-foot-tall igloo was stolen out of his van in Brooklyn this month, he said. The igloo was used as a performance space.
View Full Caption
Tom Montagliano

A local artist is on the lookout for a massive inflatable igloo after it was stolen from his van in Brooklyn, he says.

Tom Montagliano’s 300-pound, 16-foot tall igloo — which he uses as a performance space — went missing this month when thieves drove off with his 2001 Ford Econoline, which he left parked on Kosciuszko Street between Marcy and Nostrand avenues, he said.

The Bed-Stuy-based musician uses the inflatable hut for his “immersive sound bath” experiences during which attendees are surrounded by a circle of eight speakers playing “ambient electronic music.”

“People relax and meditate and kind of forget about the outside world for a bit. I like to take them on almost a sound journey,” Montagliano, 35, said.

“I want it to feel kind of like a dream where it’s a unique, interesting experience.”

Montagliano started his sessions in 2012, hosting 50-minute sittings on beaches, rooftops, in churches, backyards and festivals across the country.

After holding performances in venues that didn’t necessarily fit the vibe he was going for, he decided he wanted his own portable structure.

“I happened upon an inflatable igloo that glowed — who would see that and not want to be inside? Nobody,” Montagliano said.

He’s had the igloo since August, he added, and has since set it up at festivals in Washington D.C., Maryland and Burning Man in Nevada.

“Once I got it up and going, I knew it was the right thing to do. People were so excited.” 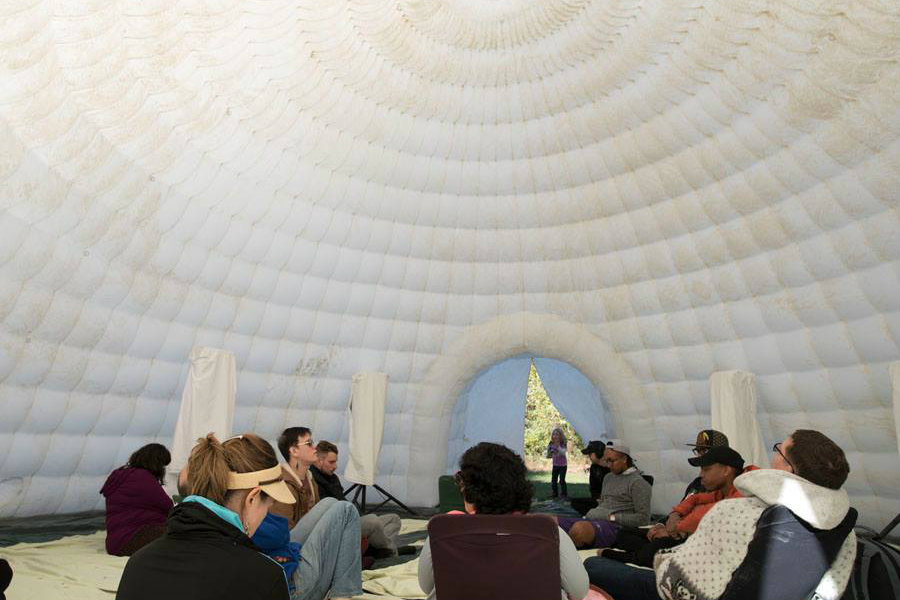 Montagliano stored the giant, $1,500 art space in his van, keeping the 32-foot-wide dome deflated and wrapped with rope in a green tarp.

But sometime between Nov. 29 and Dec. 1 his black Ford Econoline went missing, he told police.

The same day he filed a police report on Dec. 1, Montagliano found the van himself while biking in Bushwick, he said.

The steering column was destroyed and the car’s ignition and stereo were gone — along with the igloo. The thieves also took a generator from the van but left the fan used to inflate the structure, he said.

News of the missing igloo was first reported by Bushwick Daily.

“I’m almost positive the thieves have no idea what it is,” Montagliano said.

His car is now undergoing repairs, but finding a fix for the igloo isn’t as easy.

The original was ordered online and took nearly three months to arrive from China, he explained, adding that there were issues and delays with the package in customs.

While he feels “strangely confident” that it may turn up again, he’s in the process of ordering another, bigger dome and collaborating with other “spacial sound artists.”

“Right now it’s a step back, but I’m going to recover,” Montagliano said.

“This to me is a midway point, hopefully to a bigger project. And I’d caution people to lock up their stuff well.”

An NYPD spokesman confirmed the theft was being investigated.

If anyone comes across a 300-pound igloo wrapped in a green tarp, they can contact Montagliano at tom@immersivesoundbaths.com.