By James Fanelli |&nbspDecember 1, 2016 7:33am
@fanellijames
Twitter Facebook Email More
Jared Kushner (left) is President-elect Donald Trump's son-in-law and one of his most trusted advisors. Kushner is one of the biggest landlords in the East Village. But tenants in his buildings have complained about the way his property management company treats them.
View Full Caption
OWEN HOFFMANN/ PatrickMcMullan.com

EAST VILLAGE — Jared Kushner is a real estate baron worth hundreds of millions of dollars, the son-in-law of Donald Trump and the president-elect's most trusted adviser — but to one of his East Village tenants he is just the turkey who spoiled her Thanksgiving.

Uta Winkler, a rent-stabilized tenant in a Kushner-owned building at 331 E. Ninth St., said in a lawsuit filed earlier this year that her kitchen and bathroom were destroyed three days before the holiday in 2013 by construction workers renovating an unoccupied unit above her apartment. 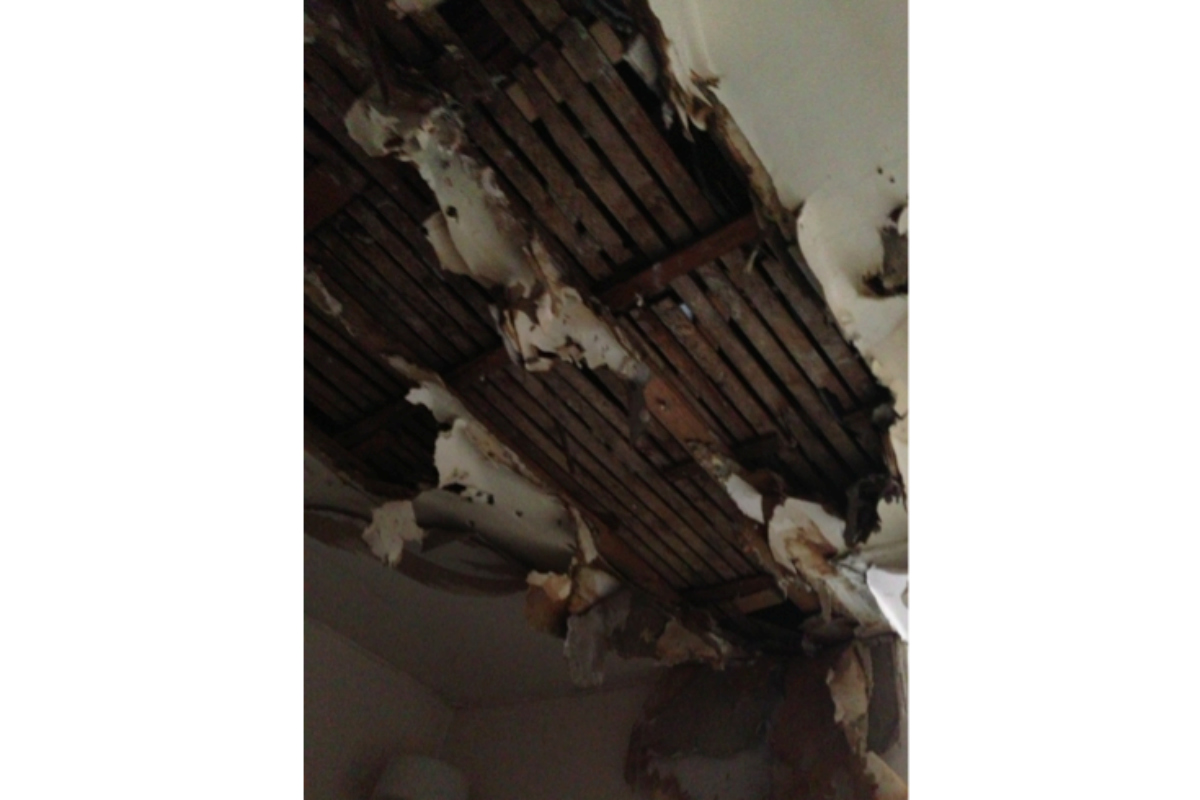 Uta Winkler said in court papers that a construction worker crashed through her bedroom ceiling and landed on her bed. (DNAinfo)

Shortly after 5:30 p.m., contractors ruptured a pipe, sending water cascading into Winkler's kitchen and causing her ceiling to collapse. For 20 minutes "the gushing water continued to flood making a sound similar to the intensity of water released from an open fire hydrant," Winkler said in the court documents.

The flood made her apartment uninhabitable, forcing her to scrap her plans to host a Thanksgiving dinner and to search for a hotel for herself and German guests who had planned to stay with her.

Even though the apartment wouldn't be fixed for a week, Kushner's property management company, Westminster Management, only offered to pay the cost of two nights in a hotel for Winkler, according to court records.

Two weeks later, Winkler had to endure more mayhem when she came home to find that a construction worker carrying dirty water and debris on the floor above hers had crashed through her bedroom ceiling, landing on her bed, court document said.

The fall destroyed her bed and other furniture, but Westminster refused to reimburse her for the damage or even return her calls, court papers said.

Without a response, Winkler decided to withhold her monthly rent of $1,637 from May 2014 to January 2015 until she was compensated for her damages.

Kushner's real estate firm, Kushner Companies, sued Winkler for the unpaid rent in 2015 in Manhattan Housing Court. Kushner Companies also sued tenants in two other units in the building for also withholding rent because of the disruptions from construction.

Winkler and the tenants in the other two units each filed counter-suits against Kushner for what they said was the havoc caused by the renovation of unoccupied units and the building of two penthouses. The tenants also said Westminster was intentionally unresponsive to their complaints. 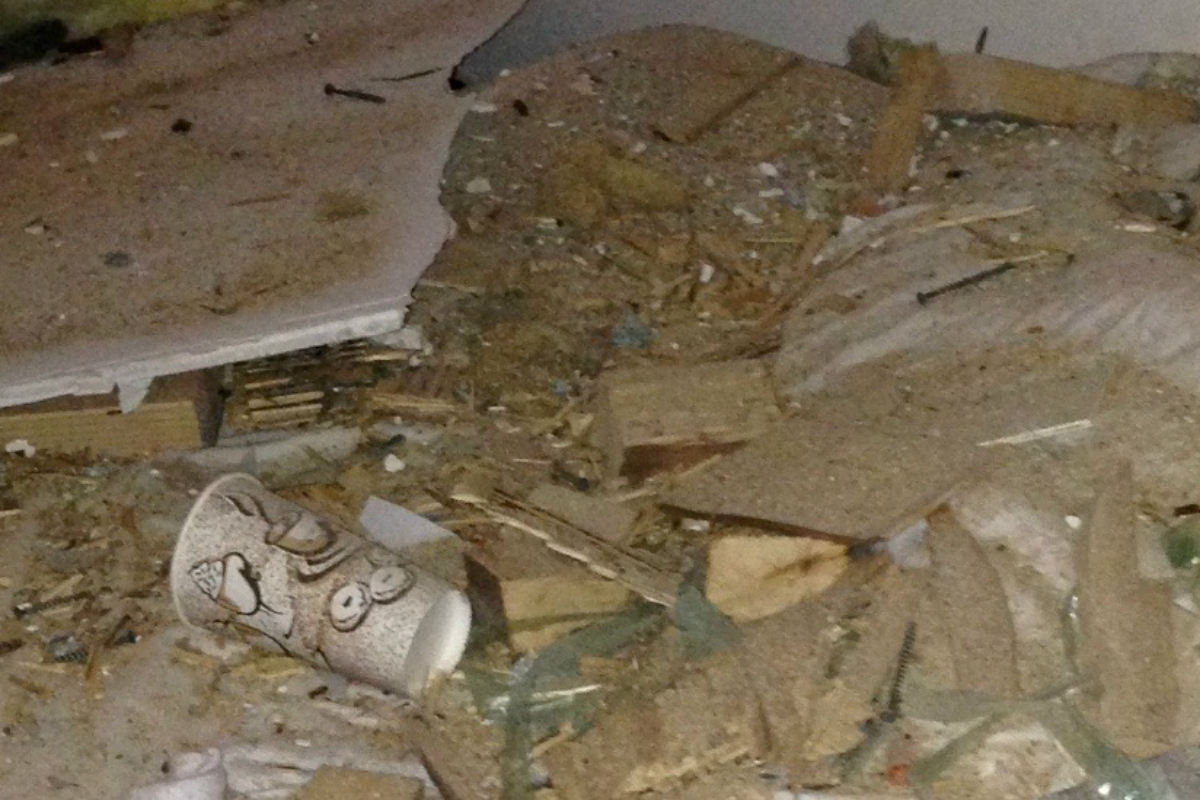 Uta Winkler said in court papers that a construction worker carrying dirty water and debris fell through her bedroom ceiling and landed on her bed. Her property manager did not respond to her requests for compensation, according to her court papers. (DNAinfo)

Michael Maher, a rent-stabilized tenant, said in his counter-claims that construction noise was so deafening he had to move out for 19 weeks until the contractors were done.

Hannah Barr, a graduate student who lived in a market-rate unit with two roommates, said in her counter-claim that she and her friends signed a lease to move into their apartment on Nov. 1, 2014, and pay $5,000 a month in rent. But, she said, Westminster never told them that, 10 days after their move-in, the building would undergo a massive construction project lasting 10 months.

Kushner, who is married to Trump's daughter Ivanka has become one of the biggest landlords in the East Village in recent years by gobbling up clusters of residential properties.

In 2013 he paid $20.25 million for four adjacent five-story buildings on East Ninth Street, including the one that Winkler, Maher and Barr have lived in.

But as his real estate portfolio has expanded, Kushner has been accused by affordable housing advocates of buying properties from landlords who used disruptive construction and other harassment tactics to force out rent-regulated tenants in order to convert their units into market-rate apartments.

Kushner's firm has also been accused of using those tactics as well to push out rent-regulated tenants at two buildings at 170-174 E. Second St.

Brandon Kielbasa, the director of organizing at the affordable housing advocacy group Cooper Square Committee, said that Kushner managed to push out 70 percent of tenants who lived in the rent-regulated buildings when he purchased them for $17 million in late 2013. Kielbasa said that the normal turnover rate for rent-regulated apartments in the city at the time was about 7 percent a year.

"When you see a turnover rate that’s 10 times the natural average, that doesn’t just happen," Kielbasa said. "That means somebody was working hard to make that happen."

Kushner's real estate company also filed lawsuits in housing court against some of the tenants who remained in those buildings, Kielbasa said.

When Kielbasa was told about the construction and lawsuits at Winkler's building, he said the tactics sounded very similar to what happened at the East Second Street buildings.

"That's alarming that there is another batch of buildings facing these same problems," Kielbasa said. "But it doesn't surprise me that much."

Kushner's Westminster Management said in a statement to DNAinfo New York that it owns more than 40 buildings in the East Village and that upgrades to these properties were a necessity.

"As with all our properties, we are committed to providing a high level of service for our tenants across that portfolio, which is nearly fully leased," the statement said. "We couldn't maintain that level of occupancy or service without investing in essential building infrastructure, so we consistently make meaningful upgrades in our walkup buildings across the city on behalf of our residents."

Both Winkler and Maher, whose housing court cases are still active, said in court filings that they tried to work with Westminster, but were ignored.

Maher, who pays $612 a month for his apartment, said in his counter-suit that he began withholding his rent in April 2015 after suffering through "deafening loud noise" and water leaks while contractors built penthouses on the roof.

Maher "tried to tolerate these conditions for a reasonable period of time, which included times when his entrance door was completely blocked by building materials," his lawyer, also Polly Eustis, said in a filing in January 2016.

In her counter-suit, Winkler said she withheld rent to cover the $16,327 she suffered in damages from the flooding and the broken bed and furniture.

Winkler, who declined to comment for this story, is also seeking an additional $5,000 for problems that arose from the kitchen ceiling's collapse.

Construction workers used the existing material — which was wet — to repair the ceiling, leading to mold and mildew that damaged Winkler's health, according to court filings.

Kushner's company sued Barr and her roommates for $5,504 in unpaid rent and legal fees.

Barr said in her March 4, 2016, counter-suit that she and her roommates partly withheld their rent after Westminster refused to address their concerns, including multiple security risks stemming from the construction work.

The front door to the building was left open all day long and unlocked all through the night, according to Barr's filing.

This led to "strange men who are not tenants in the building gaining access into the building through the unlocked front door and continually occupying the common areas of the building," her filing said.

Barr's filing also said that homeless men used the scaffolding around the building as a shelter. And the filing said that an intruder broke into Barr's apartment and another unit was burglarized.

Meanwhile, Barr and her roommates had to deal with gas leaks, brown sewage dripping through their ceilings and onto their beds, and "being forced to breathe in construction dust and construction particles in the air inside the building for the better part of nine months and continuing."

Her case was dismissed June 28, 2016, because housing court no longer had jurisdiction after Barr and her roommates' lease ended. Barr declined to comment for the story.