By Camille Bautista |&nbspDecember 1, 2016 4:26pm
@CamBautista
Twitter Facebook Email More
If approved, the proposed rezoning of lots on Flushing and Franklin avenues would bring two new residential buildings to the area, one of which would replace the Rose Castle catering venue.
View Full Caption
DNAinfo/Camille Bautista

BEDFORD-STUYVESANT — Developers are looking to rezone swaths of land along Flushing and Franklin avenues to build nearly 300 rental apartments in Bedford-Stuyvesant.

A total of 296 units would rise at 376-378 Flushing Ave. and 43 Franklin Ave., with 88 of the apartments slated to be affordable units, according to plans presented to the Department of City Planning.

The lots are currently zoned as a M1-2 manufacturing district, which doesn’t allow for residential use.

Developers are seeking to re-zone the sites to a R7A/C2-4 district and M1-2/R6A mixed-use district, which would let them build an eight-story mixed-use building and a six-story residential building.

The project at 376-378 Flushing Ave. would have 176,670 square feet of space, with 168 apartments on the building’s upper floors, retail on the ground floor and a parking garage, plans show.

On Franklin Avenue, the second site would house 126,838 square feet of residential space in 128 units and a 64-car garage. 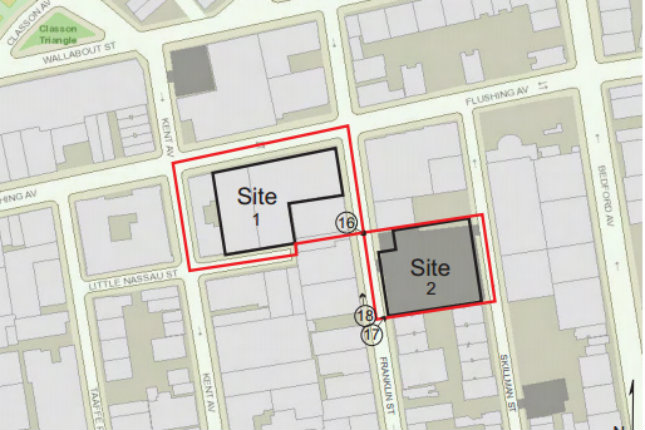 News of the filings with DCP was first reported by New York YIMBY.

The new development would fall under the city’s new Mandatory Inclusionary Housing program, which requires developers to include a portion of affordable units in some new construction.

Under MIH, 88 apartments — 50 at the Flushing Avenue building and 38 on Franklin Avenue — would be reserved for residents with incomes averaging 80 percent or below the Average Median Income, or $62,250 for a family of three.

The proposal is currently in a 60-day review period from Brooklyn's Community Board 3, which will host a public hearing for the rezoning on Dec. 5 at 7 p.m. at Bedford-Stuyvesant Restoration Corporation, 1368 Fulton St.

The plans will then be subject to review from the borough president, City Planning Commission and final approval from the City Council.

If given the green light, the project would be completed in 2024, plans detail.