MTA Wants to Help Low-Income Riders With Fare Hike, But Doesn't Have Plan

FINANCIAL DISTRICT — The MTA's board said it's concerned about the welfare of low-income transit riders as the city faces an impending fare hike — but doesn't yet have a plan to fix the problem.

The board discussed the issue — which they referred to as a "social fare" — at their monthly meeting last week, with several members echoing the concerns of activists who have been pushing for subsidies for low-income New Yorkers.

"I have reason to believe that everyone on this board is sensitive to the social fare issue," MTA Chairman Tom Prendergast said at the meeting. "So the question is how do we address it?"

The discussion came after MTA Director of Corporate Initiatives Federicka Cunca's presentation on two options for the upcoming fare hike, which she touted as the lowest increase proposed since the MTA started the biannual increases.

David Jones, appointed to the MTA board earlier this year by Mayor Bill de Blasio, called out one of the slides in Cunca's presentation that featured three pie charts meant to be representative of low, middle and high-income New Yorkers. 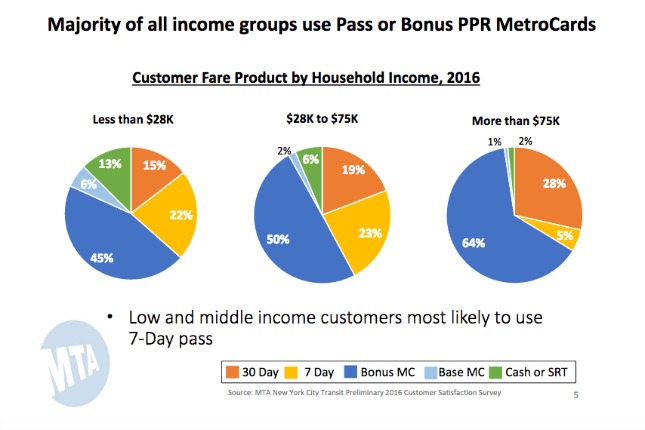 Jones noted that, according to the pie chart, the fare increase will hit a majority of low-income people the hardest, as 64 percent appear to use cash, Single Rides, or MetroCards with a bonus for a certain amount of cash put on the card.

"When I look at the increases that you're suggesting, those particular categories get hit pretty hard," Jones said. "That's an overwhelming majority of low-income people [who] are in the least advantageous area of the fare structure."

Hearings on the two different fare hike options are taking place across the metropolitan area throughout December. The board will vote for one at their meeting in January.

Prendergast shared an anecdote from his time working in transit in Vancouver, in which a colleague suggested that rather than try to keep fares down for everyone, "We should figure out ways to subsidize people at the lower end of the spectrum."

Board member Charles Moerdler, an appointee from Gov. Andrew Cuomo, said the city should handle that "as part of its progressive agenda" and "fully subsidize that differential by providing whatever means are required to get those people below the poverty line the kind of fare that they can afford to meet."

James Vitiello, a board member appointed by the Dutchess County Executive, balked at the idea of a subsidy, and accused the city of backing out of previous subsidy agreements.

"There are other subsidies that they have committed to over the years, including student MetroCards, that then were not forthcoming in terms of payment," he said. "Those have a way of sort of dissipating over time, those subsidies."

Polly Trottenberg, an MTA board member and the city's Department of Transportation commissioner, fired back at Vitiello.

"I think you don't have a good understanding of all the deals between the city and the MTA," Trottenberg said.

The student MetroCard deal, Trottenberg said, was "cut some years ago."

In terms of subsidizing a "social fare" for low-income riders, Trottenberg said, "I think it's something the city's open to discussing," but added that the burden shouldn't be entirely on the city.

And she reminded the board that the ultimate decision on social fare isn't theirs to make.

A push by activists for half-price MetroCards for low-income New Yorkers has seen some traction in the City Council, with at least five Council members issuing statements after the fare hike announcement in support of a subsidy for low-income riders.

"Subway and bus fares are already a burden for thousands of New Yorkers, and with this planned increase, ensuring we have Fair Fares will be a vital part of supporting residents in need," said Council Transportation Chair Ydanis Rodriguez. "Transit is a public good and New York needs to begin treating it as such with investments that make it accessible to all."