FINANCIAL DISTRICT —  A longtime Greek Orthodox church that was destroyed on 9/11 is pushing ahead with its reconstruction.

The St. Nicholas National Shrine, a reincarnation of the small St. Nicholas Church that once sat in the shadows of the Twin Towers, is steadily rising in its new location on the World Trade Center's Liberty Park.

The Port Authority's WTC Progress Facebook page posted a photo earlier this week of iron workers installing the ribs of the church's dome.

The new church, which will also serve as a non-denominational bereavement site, sits at the Eastern end of the park — a leafy public space, built atop a vehicle security center, that overlooks the 9/11 Memorial Plaza.

Santiago Calatrava, the designer of the white-winged WTC Oculus, was also the architect behind the $35 million St. Nicholas reconstruction. 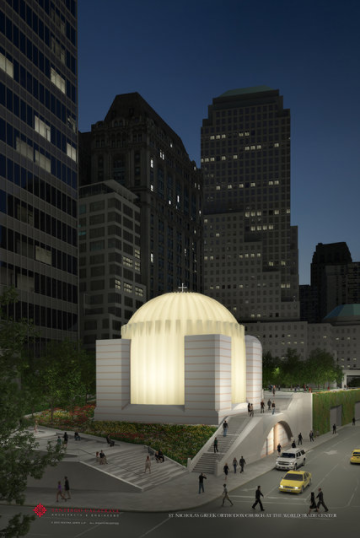 The church's thin walls — made from marble quarried from the same region in Greece that was used to build the Parthenon — will glow at night, thanks to LED lights embedded in its structure.

The church is expected to reopen by 2019.