The mall, in partnership with Tribeca Enterprises, the company behind the Tribeca Film Festival, has launched a "Virtual Reality Arcade" — eight viewing stations that let visitors take in an immersive short film, for free.

The movies, which offer 360-degree views via special virtual reality headsets, include short pieces by the directors of "The Bourne Identity" and animated film "Madagascar."

The pop-up VR arcade will run for the next two weekends, from Friday through Sunday, until Nov. 20. The stations are open from 12 p.m. to 8 p.m., and are available first-come first-serve.

“Without a doubt, this Virtual Reality Arcade has the power to rewrite the rules of cinematic storytelling and give our visitors the chance to lose themselves in startlingly lifelike digital worlds,” said Westfield’s Chief Operating Officer, William Hecht, said in a statement.  “We can’t wait to see the reactions on our guests’ faces as they look up, down, and all around while experiencing surprise, wonder—sometimes fear—and other times astonishment when watching this truly mind-blowing VR content.”

The short VR movies, which range from four to 13 minutes, include an animated piece about space aliens called "Invasion!", a supernatural drama set in New York called "Invisible" and a Cirque du Soleil production, its first linear narrative, titled "KÀ The Battle Within." 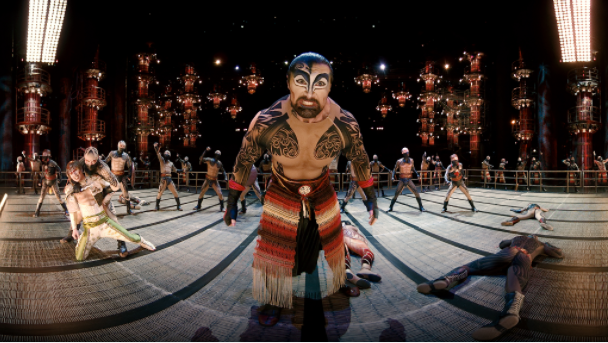 A scene from the VR movie, "KÀ The Battle Within." Courtesy of Westfield.

For more information about the Virtual Reality Arcade, head here.