PARK SLOPE — Senior citizens who say the lack of an elevator at the Seventh Avenue subway means they can't take the train anywhere joined with politicians Wednesday to demand action from the MTA on making the station accessible to all.

"This is a campaign whose time has come," Lander told the crowd.

"Hurry!” shouted a grey-haired man among the residents, some of whom were armed with signs and gathered outside the subway station Wednesday morning to announce the effort. 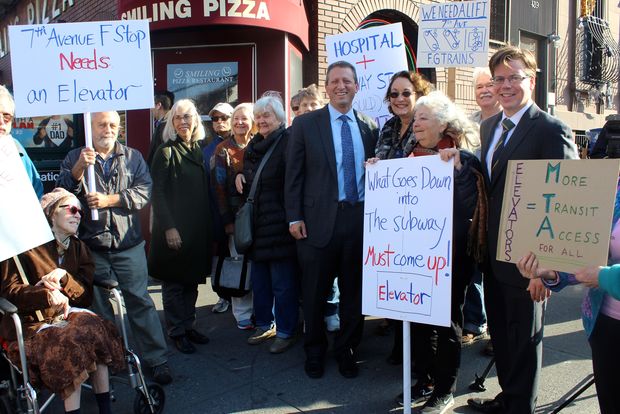 The MTA has been working its way through a list from the 1990s of 100 "key stations" targeted for accessibility upgrades. So far, 86 are complete and the MTA expects to finish the job by 2020, an agency spokesman said Wednesday. Seventh Avenue isn't on that list.

When the MTA selects the next round of stations to get elevators, advocates want Seventh Avenue to be near the top, they said Wednesday.

"MTA NYC Transit is currently focused on completing the installation of elevators at the stations in the list of 100 that are mandated to be accessible by 2020 which have not yet been made accessible," MTA spokesman Kevin Ortiz said.

"Once the 100 stations are made accessible and as we go forward in assessing future accessibility needs, the Seventh Avenue station will be considered as part of that needs-assessment process," he added.

With nearby New York Methodist Hospital about to build a six-story outpatient center and a senior center just steps away, there are many reasons to prioritize the Seventh Avenue stop for elevators, Lander said.

"We've got seniors, we've got people with mobility issues, we've got families with strollers — so many thousands of people in Park Slope need and have a right to expect that this station be accessible," he said.

Unlike some stations where installing an elevator is considered so costly that the MTA won't even consider doing it, the Seventh Avenue stop is considered a feasible option for an elevator, Lander said. MTA representatives said in 2015 that the accessibility upgrade would cost $15 million.

Lander said he would work to get "seed money" for the project into the city budget and look for state and federal partners who could provide funding as well.

"This city is always promoting itself as a great place to retire, but in my opinion the MTA needs to up its game when it comes to accessibility," said Jasmine Melzer of Good Neighbors of Park Slope.

She and other seniors launched an unsuccessful 2014 petition demanding an elevator. She said the MTA suggested then that locals take the bus to Church Avenue, the only F/G stop in Brooklyn with an elevator.

The nearest stop to Park Slope with an elevator is Atlantic Avenue-Barclays Center, according to the MTA's current list. Even Smith-Ninth Street, the highest above ground stop in the world, doesn't have an elevator.

But elevators aren't just for older people who have a hard time using stairs, several people at Wednesday's launch pointed out. Lander said the campaign will probably join forces eventually with Park Slope Parents and other members of the neighborhood's thriving stroller brigade.

Several women with strollers had to push their way through the crowd of seniors to enter the subway Wednesday morning, a trip that means hauling a stroller down some 70 stairs. One of them said "I'm with you" as she passed by the older activists.