PARK SLOPE — Squeaky wheels are getting some grease when it comes to the Citi Bike rollout in Brooklyn.

The Department of Transportation has adjusted at least two Citi Bike docking stations in Park Slope after community criticism about their placement, a DOT spokeswoman said.

DOT recently shifted the docking station on Fifth Avenue and Third Street after officials determined the station "could be improved" by moving it closer to Third Street, a DOT spokeswoman said. 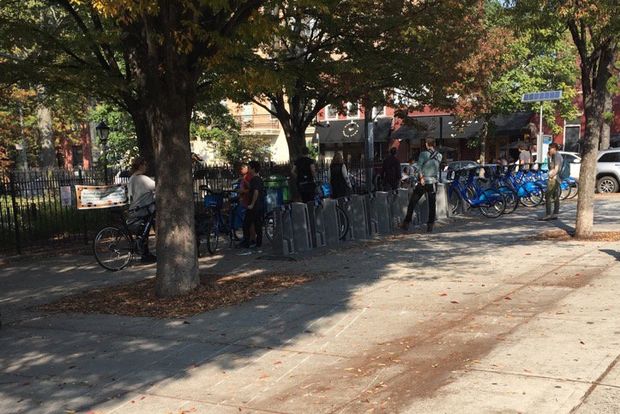 On Prospect Park West and Third Street, the DOT relocated the station's payment kiosk to the east side of the station after "DOT assessed community feedback received about that location," a spokeswoman said.

The kiosk for the Prospect Park West and Third Street docking station had previously been right in front of an 1898 bronze statue in Prospect Park. The New York Times covered some observers' "apoplectic" reaction to the location.

The story sparked intense debates on Twitter, with former NYC Parks Commissioner Adrian Benepe calling the installation "thoughtless" (while also saying he was a supporter and user of Citi Bike).

"As part of the extensive planning process DOT worked with the Community Board and other community stakeholders on the placement of Citi Bike stations in CB6, and will continue to do so,” a DOT spokeswoman said. "DOT will continue to review all concerns and suggestions regarding Citi Bike placement throughout the service area and will carefully explore if any stations flagged are candidates for adjustment."

Citi Bike's arrival in Brooklyn's Community Board 6 has been the subject of both joyful celebration by cycling enthusiasts and intense criticism by some angered over the loss of on-street parking spaces.

DOT declined to attend an Oct. 20 Community Board 6 public hearing on Citi Bike's arrival, but Commissioner Polly Trottenberg wrote an Oct. 17 email asking Community Board 6 to submit to DOT the "top five locations of concern and any suggested alternatives."

It wasn't immediately clear whether the two locations DOT adjusted were on the "top five" list.