SOUTH STREET SEAPORT —  New signs in the South Street Seaport are marking the powerful floodwaters that surged through the historic neighborhood four years ago when Hurricane Sandy devastated much of Lower Manhattan.

As a permanent reminder of the risk for destructive storms, and need for resiliency measures to protect the city, the South Street Seaport Museum unveiled three “high water mark” signs on Saturday, the anniversary of Sandy. 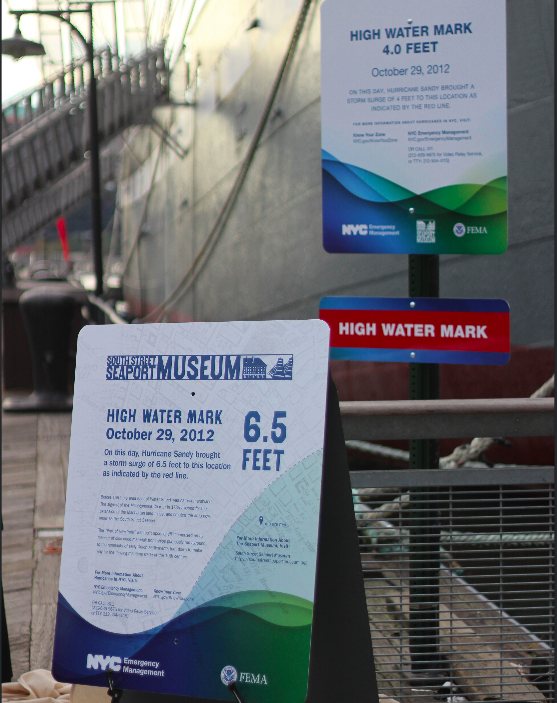 The "high water mark" signs are supposed to serve as a reminder of the need for resiliency measures. (Courtesy of the South Street Seaport Museum)

The three signs mark the height of various storm surge points near the Seaport Museum, which was deluged by corrosive floods, causing damage the museum is still recovering from.

"The South Street Seaport Museum and its historic buildings were devastatingly flooded during Sandy, as were many businesses, homes, and communities throughout New York," said Captain Jonathan Boulware, executive director of the South Street Seaport Museum in a statement. "Although Sandy was a one-time event, a storm like this will occur again, and we must be prepared."

Flood protection efforts have yet to get momentum Downtown, as the city’s Lower Manhattan Coastal Resiliency Project, using city and federal funding, remains in the early planning stages.

Among the potential storm protection measures that have been suggested include deployable flood walls, levies and raising the coastline with parkland from Montgomery Street in the Lower East Side around the tip of Manhattan, up to Battery Park City.

The city has secured $203 million to harden the coastline from Montgomery Street to the Brooklyn Bridge, known as the Two Bridges project area, while there is a separate $108 million designated to protect the “Manhattan Tip” – from the Brooklyn Bridge around to the west, to the north end of Battery Park City.

The LMCR acknowledges that the $108 million is not enough money to create the appropriate storm barriers around the tip of Manhattan, but they are working to source additional funds.

Construction on storm barriers for LMCR projects wouldn't begin until 2018 – a delay that some lower Manhattan residents say is far too long given the devastation Sandy wrought.