GOWANUS — Brooklyn's most notorious waterway started coughing up some of its sunken secrets Monday with the start of debris removal on the Gowanus Canal, though the haul will probably yield more urban trash than historical treasure, U.S Environmental Protection Agency officials said.

Contractors will use a 100,000-pound hydraulic excavator perched atop a massive barge to pluck a rusting boat hull and other detritus out of the polluted canal's Fourth Street turning basin, a key step forward in the canal's $506 million Superfund cleanup, EPA officials said Monday. 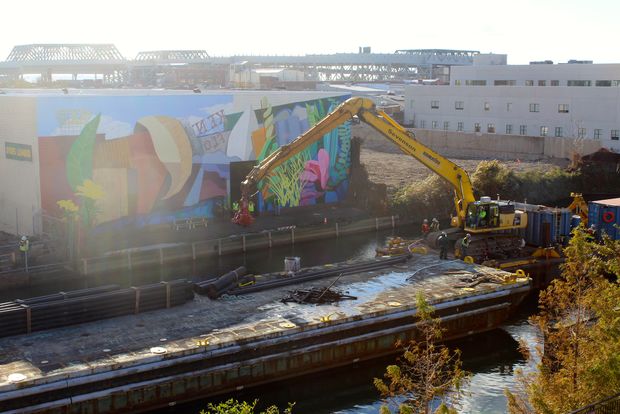 Contractors started work on removing large debris from the Gowanus Canal on Monday in the Fourth Street turning basin, behind the Whole Foods.

After debris removal, work will start next year on the next big step in the Superfund cleanup: dredging contaminated sediment out of the canal.

Debris removal on the Fourth Street turning basin will happen over the next three to four weeks and will remove objects in order from largest to smallest. Sonar scans of the canal's floor revealed 36 "large objects" in the turning basin, including "two boat wrecks, eight support pilings, a tree and 25 other items that measured greater than five feet across,” EPA officials said.

"There may be some surprises," said EPA's community involvement coordinator Natalie Loney, but she said most of the waterlogged refuse will probably just be the typical garbage in city waterways, such as hubcaps and shopping carts. 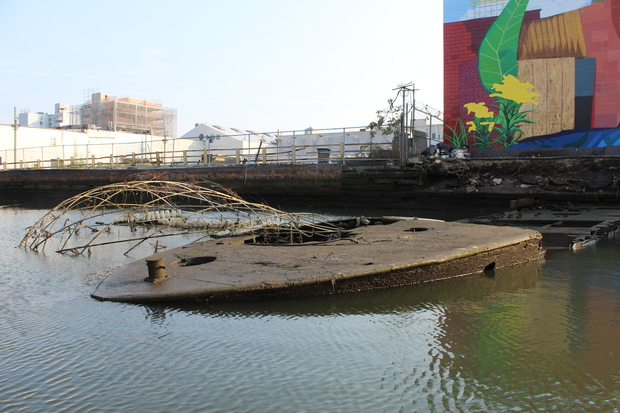 A 2015 photo of the sunken Harvest Dome art project and an old ship hull, which are among the large debris that will be removed from the Gowanus Canal starting this week.

The debris removal in the Fourth Street turning basin is a pilot project that will let contractors test techniques and figure out which ones should be used for getting junk out of the rest of the canal, officials said. The debris has to be taken out because it could interfere with dredging if it was left in place.

Items that are removed from the canal will be sorted into recyclables and landfill materials, then transported by barge to facilities that can handle hazardous waste. Air quality monitors will track whether the process poses a health risk for workers or local residents.

Progress was slow on the first day of debris removal Monday. Contractors with Sevenson Environmental spent the first couple of hours positioning two massive barges that had been pushed into the canal by tugboats after a trip from the Erie Basin Marina in Buffalo. By the third hour, a red claw-like grapple at the tip of an excavator's 60-foot arm had delved into the murky canal and pulled up a modest pile of old-looking boards.

Despite the seemingly leisurely pace, EPA officials said Monday that the overall Superfund cleanup in Gowanus is moving rapidly. The entire cleanup is expected to be finished around 2022, officials said.

"This is actually pretty fast in terms of a cleanup," Loney said. "We're really excited to see the start and more importantly, I think the Gowanus community is really excited."

Monday's debris removal took place behind the Gowanus Whole Foods, giving people munching on kale salads at the store's outdoor cafe a front-row seat to the long-awaited cleanup of the canal, which was first declared a Superfund site in 2010.

Lifelong Carroll Gardens resident Anthony Pugliese watched from the grocery's rooftop bar. He said people like to joke about finding Mafia-related bodies in the canal, but he thinks much older artifacts would be far more interesting.

"I would love to see them find stuff from the Revolutionary War. I'd like to see some cannon balls come up, or maybe a musket," Pugliese said.

READ MORE ON CLEANUP EFFORTS ON THE GOWANUS CANAL