CITY HALL — The NYPD sergeant who shot and killed emotionally disturbed Deborah Danner has been sued at least twice for brutality — including a 2011 case in which he was accused of beating a man with a baton after he had already been subdued.

When he was still a patrol officer, Sgt. Hugh Barry and other officers beat Gabriel Diaz after police ordered him to leave an album release party for hip-hop artists Pete Rock and Tec and Steele at Tammany Hall on the Lower East Side on June 28, 2011, according to one lawsuit.

Diaz said he complied with orders from officers to leave the nightclub when Officer Lauren Diaz pushed him in the back, according to the lawsuit.

Gabriel Diaz said he turned around and asked the officer why she pushed him.

"I didn't do nothing, [why] did you touch me?" Gabriel Diaz said he told the officer.

Officer Diaz allegedly told Gabriel Diaz to "Get the f--k out of my face. Let's go. I told you to go."

That's when another officer grabbed Gabriel Diaz by the collar, the lawsuit said. He claimed to have put his hands in the air but said the officer started punching him and hitting him with the baton.

When Gabriel Diaz  decided to defend himself, Barry and another officer began to punch and kick him, the suit said. Barry allegedly continued the assault even after Gabriel Diaz was subdued. (You can see several officers involved in the melee at the 2:45 mark of the video above, which was used in evidence at the trial.) 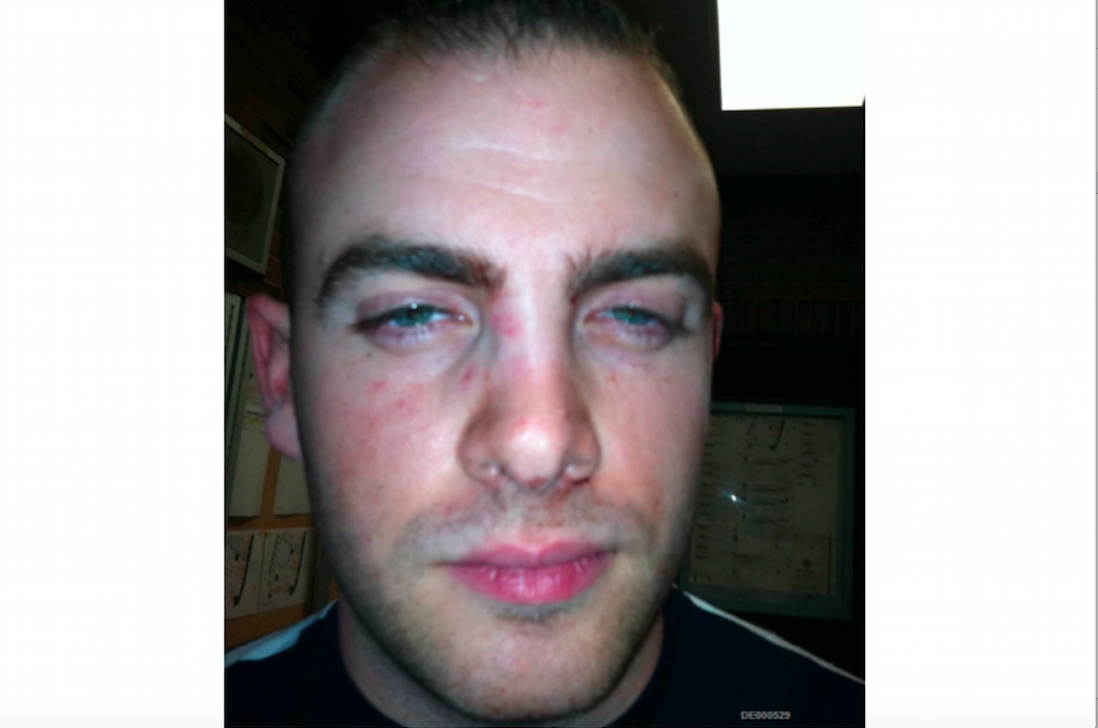 Gabriel Diaz said he was treated at Bellevue Hospital for trauma while also charged with obstruction of governmental administration, resisting arrest and marijuana possession — charges that were all dropped after multiple court appearances.

The case went to trial, but the jury decided in February of this year that there was not excessive force used.

In another lawsuit from 2010, Gregory Peters, a 25-year-old African-American man, claimed he was standing in front of the B.B. King Blues Club and Grill at 237 W. 42nd St. when Barry and other officers blasted him with pepper spray.

According to Peters' attorney, Brett Klein, his client was leaving the club with a friend at around 4:10 a.m. when an officer allegedly pushed his friend.

Standing 10 feet away, Peters expressed concern and began walking toward his friend and the officer when he was pepper sprayed, Klein said.

Barry and the other officers were accused of grabbing Peters' arms and punching him in the back, causing him to fall to the ground.

When he was on the ground, Peters said the officers repeatedly kicked him in his back and punched him in the face. He suffered a black eye and back pain.

"Barry's history shows an abuse of authority and a tendency to escalate encounters with civilians rather than de-escalate them," Klein added.

Klein said he believes the incident was part of the city's stop-and-frisk efforts that a federal judge later ruled violated the constitutional rights of black and Latino men.

In 2010, the NYPD performed more than 601,000 stop-and-frisks and more than 518,000 people were found to be doing nothing wrong. Records show 54 percent of those stopped were black.

"They stopped an African-American kid in Times Square. Our client voiced his concern from 10 feet away and he ended up getting beat. This is an example of Barry of escalating a situation that should have been de-escalated," Klein explained.

In the latest incident, police responded to Danner's apartment on Pugsley Avenue near Randall Avenue in Castle Hill at 6:06 p.m. Tuesday after a complaint that she was acting irrationally, the NYPD said.

Barry and other officers entered Danner's seventh-floor apartment, where she threatened police with a pair of scissors.

Barry initially calmed Danner down and got her to let go of the scissors. But as Danner was being escorted out of the apartment in her nightgown, she grabbed a baseball bat, ignored orders to drop it and charged at Barry, police said.

Barry fired two shots from his service revolver, striking Danner in the torso.

Mayor Bill de Blasio said he was unaware of any lawsuits against Barry during a City Hall press conference Wednesday, adding that he had only seen portions of Barry's record.

"I can’t speak to it until I have more information," de Blasio said when asked about the $25,000 settlement.

But the mayor did say that Barry violated multiple police protocols.

► READ MORE: These Are the NYPD Protocols For How to Handle Cases of Mentally Ill People

De Blasio said  Barry should have waited for the Emergency Services Unit, which has special training to deal with emotionally disturbed people, to arrive before taking action.

Barry could have also used the Taser he was equipped with to disarm Danner. The sergeant also had the option of bringing in a hostage negotiator, the mayor said.

"It's quite clear that our officers are supposed to use deadly force only when faced with a dire situation. And it's very hard for any of us to see that that standard was met here," de Blasio said.

Barry had also received de-escalation training ordered for the entire department after Eric Garner died when he was placed in a chokehold by police in Staten Island.

The mayor said that the NYPD exercises overwhelming restraint when it comes to using deadly force. The city has received more than 128,000 calls for emotionally disturbed individuals this year, and this was the first fatality. It's unclear how many of the cases involved the threat of violence.

Sergeants Benevolent Association President Ed Mullins said the lawsuits against Barry don't mean he was a poor officer or that he was prone to making bad decisions.

"The city has a history of settling lawsuits rather than fighting lawsuits and they do so because there is a cost savings." Mullins said. "Because the city chooses to make a business decision doesn't mean there was wrongdoing."