East Midtown Rezoning Plan: What You Need to Know

By Noah Hurowitz |&nbspOctober 5, 2016 12:24pm | Updated on July 27, 2017 8:49am
@NoahHurowitz
Twitter Facebook Email More
The proposed rezoning is meant to spur the redevelopment of east Midtown, much of which was built more than 50 years ago.
View Full Caption
Wikimedia Commons/Dmitry B.

MIDTOWN —The plan to rezone a section of East Midtown — which the city estimates could result in 16 new skyscrapers over the next 20 years — is set to face one of its final hurdles Thursday.

The plan, which save for a few disputed issues has broad support from developers, local politicians and City Hall, is set to go before the City Council's Land Use Committee at a hearing scheduled for 2 p.m., according to the Council website.

The proposal, which has been in the works since 2014, aims to promote development over a roughly 78-block area of Midtown centered around Grand Central Terminal. It would create several tools to fund public-works projects and preserve landmarks through direct sponsorship by developers of transit-improvement projects, the sale of air rights from landmarked properties and contributions by developers to a public-improvement fund.

Owners of older buildings that redevelop them into denser or taller structures than what current zoning permits would be allowed to rebuild on their sites to the dimensions of the current building, with the city taxing a portion of the value of the overbuilt square footage. That revenue would then go into the improvement fund.

The City Planning Commission approved the proposal in June. If the Land Use Committee approves it Thursday, City Planning will review the plan to ensure that it adheres to the agency's environmental review, after which it will go before the City Council for final approval on Aug. 9, according to Councilman Dan Garodnick, who has been a leading proponent of the plan.

“I’m hopeful that we are finally going to be able to land the plane here,” Garodnick said Wednesday. “This is a plan that’s expected to last for the next generation.”

Much of the rezoning is already agreed upon, but a few sticking points include the price per square foot developers should have to pay into the public fund, the amount the city should tax air-rights transactions, and whether developers should be required to build public plazas into their new towers, Garodnick said.

This is not the first time lawmakers and real-estate honchos have attempted to rezone of a swath of Midtown. A similar plan was advanced by the Bloomberg administration but was withdrawn in 2013 after elected officials, including Garodnick, opposed it, saying it lacked transparency regarding exactly what public improvement projects would be funded through deals with developers.

“I think we are on a much better path today,” Garodnick said. “The result of the pre-identified list is that it guarantees benefits to transit riders and gives commuters and developers alike a level of predictability because we will have defined the public improvement up front.”

Here’s what you need to know about the new rezoning plan:

► First of all, what remains to be figured out?

Much of the proposal is widely agreed upon, but there remain a few details up in the air.

A market study commissioned by the NYC Economic Development Corporation found that air-rights prices in the rezoning area averaged $301 in 2015 dollars, but the de Blasio administration is pushing for the fixed minimum price out of concern that without it developers could artificially depress the value of air rights, according to The Real Deal.

► What will the rezoning do?

The city's goal is to rezone the area to allow developers to build taller buildings, as long as they make a set of required contributions to the public, which would take several forms: giving money for transit improvements in the area, buying development rights from adjacent landmarks, or by creating public plazas on their properties.

The proposal includes a list of pre-identified transit improvement projects, which Garodnick said ensure that the public knows exactly what developers will be pitching in on in exchange for height bonuses.

The rezoning proposal also gives the owners of landmarked properties in the new subdistrict the ability to sell air rights, also called development rights, to developers of adjacent properties. According to the proposal, this will help preserve landmarks by giving their caretakers an infusion of cash, and would designate a portion of the sale to the city to add to a public improvement fund.

Another allowance in the rezoning proposal is the ability for owners of “overbuilt” properties — older buildings that are denser or taller than current zoning would allow — to rebuild on their sites to the dimensions of the current building, with the city taxing a portion of the value of the overbuilt square footage.

Currently, developers have little incentive to knock down outdated buildings as any new project would provide less income, since they'd have to rebuild at a lower density to abide by current zoning rules, Garodnick said.

“If you are looking to build bigger you would simply look to the zoning amendment and see what improvements you would need to do in order to secure additional development rights,” he said.

To be clear, this does not mean that every property owner in the new district will be able to tear down their building and put up a skyscraper. New buildings must be located on a wide street or avenue, dedicate no more than 20 percent of the building’s floor area for residential use, and comply with environmental performance standards.

The greatest density would be permitted to properties adjacent to Grand Central Terminal, and the allowed floor-area-ratio (a metric used to calculate density) will be reduced the farther away from the major transit hub.

Based on these qualifications, DCP has identified 16 sites that could potentially sprout new towers in the next 20 years, leading to the creation of 6.6 million additional square feet of office space, according to its proposal. 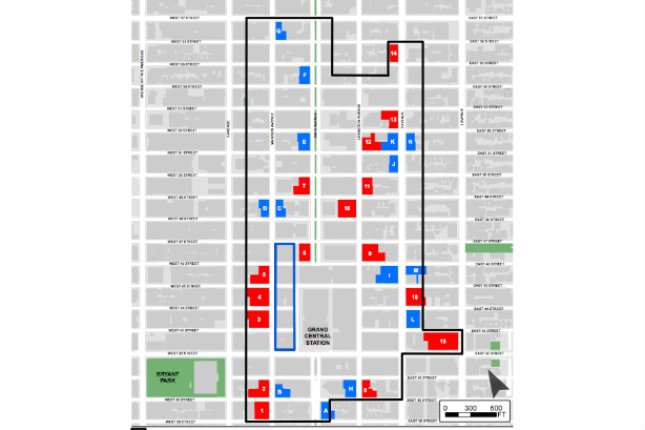 The areas in red are sites the Department of City Planning has identified as likely to be redeveloped under the rezoning. The blue indicates properties that could be redeveloped, but isn't as likely for technical reasons, such as multiple ownerships or irregular shapes.

► Who decides what to do with the public improvement fund?

The area of Midtown in question is incredibly densely built, and according to DCP, the average age of buildings in the area is 75 years old, with more than 60 percent of the building stock built 50 years ago or more.

The city is concerned that Midtown’s older office space will become less attractive to tenants, which DCP says makes the "premier job center" less competitive compared to other neighborhoods.

Proponents of the rezoning say that allowing for greater height in the district would give developers leeway to build modern office buildings and push the area’s office stock into the current century.

Midtown has seen something similar recently in the rezoning of the Vanderbilt Corridor, a stretch of Vanderbilt Place next to Grand Central Terminal. As part of that rezoning, developer SL Green agreed to pay out $220 million for improvements at Grand Central in exchange for being allowed to build its massive One Vanderbilt tower higher than current zoning allows. (The Vanderbilt Corridor would be subsumed by the Special Midtown District and be subject to the new zoning regulations).

Unlike the Vanderbilt Corridor, which required a special permit, developers in the East Midtown Subdistrict would be able to get as-of-right bonuses with the new rezoning.

► Hasn't this happened before?

The Bloomberg Administration in 2012 put forward a similar rezoning proposal, and it got as far as being approved by the Department of City Planning.

Like the current plan, Bloomberg’s rezoning would have tied height bonuses to contributions from developers, and would have put money into a public improvement fund through the sale of air rights. Bloomberg withdrew the plan in In 2013.

There are several critical differences between the current plan and Bloomberg's plan, which ultimately lost support from key people like Councilman Dan Garodnick and Council Speaker Christine Quinn to withdraw their support.

Under the new plan, developers would buy air rights from landmarks, with a cut of the deal going to the city. Previously, under Bloomberg’s plan, the city would have sold air rights directly to the developers, which Garodnick said did not do enough to help landmarks preserve their buildings.

Sara Morell, a spokeswoman representing several landmarks in the area including Saint Patrick’s Cathedral, any rezoning of the area must “provide significant relief from the high cost of maintaining landmark buildings and to assist in their overall preservation.”

► How did we get to the current plan?

Renewed negotiations for East Midtown rezoning began in September 2014, with the first meeting of the East Midtown Steering Committee, a body of local community boards, business and real-estate officials, and civic and labor groups.

That committee, co-chaired by Manhattan Borough President Gale Brewer and Garodnick, who represents much of the area, met 19 times to go over the issues, study previous plans that didn’t pan out, and speak with experts. In October of 2015, the committee released its final report, a list of recommendations to the Department of City Planning, the agency responsible for developing the actual rezoning proposal, which the City Planning Commission  approved in June.