By Irene Plagianos |&nbspOctober 4, 2016 8:41am
@IrenePlagianos
Twitter Facebook Email More
The relocation of the historic Fulton Fish market warehouse, known as the Tin Building, is being tacked on to existing land use approvals.
View Full Caption
SHop Architects

SOUTH STREET SEAPORT — A long-disputed relic of the South Street Seaport's fish-mongering days is moving closer to an overhaul, while some local preservationists see it as a move to redevelop without full review by the city.

South Street Seaport developer Howard Hughes Corporation is pushing ahead with its plan to reconstruct the Tin Building — a landmarked Fulton Fish market warehouse, empty since 2006, that has fallen into disrepair — and redevelop it into a seafood-inspired food market.

The overhaul of the Tin Building had previously been presented as part of a larger — and controversial — mixed-use redevelopment plan for the seaport that included tearing down a neighboring fish market warehouse, the New Market building and moving the South Street Seaport Museum. The developer has since said it's scrapping the mixed-use project.

Howard Hughes Corporation, working with the Department of City Planning, is now asking the City Planning Commission to tack on the rebuilding process of the 1907 warehouse to an existing land use approval, for the well-underway overhaul of Pier 17, calling it a "minor modification."

The Tin Building sits at the base of Pier 17, which is undergoing it own reconstruction, and will be the site of a new, massive glass mall. Pier 17's Uniform Land Use Process, known as ULURP, was approved several years ago by City Hall. 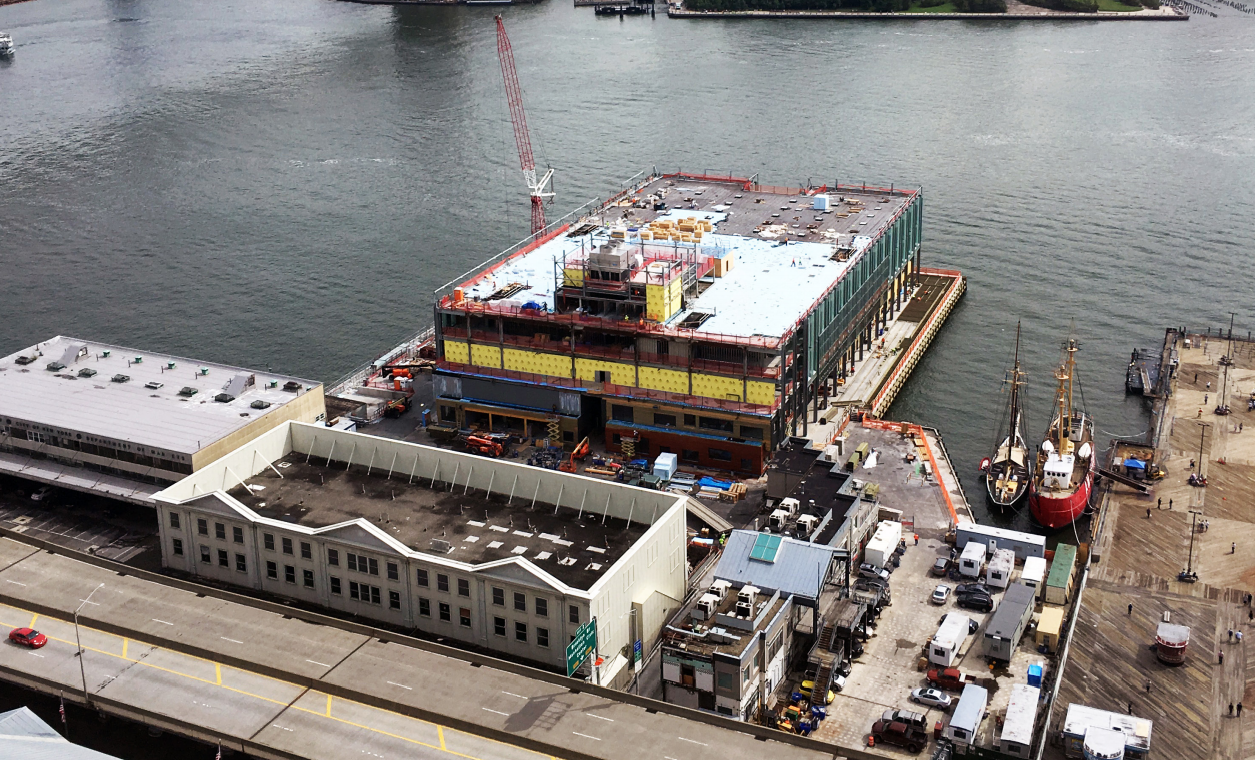 The Tin Building sits at the base of Pier 17, which is being reconstructed. (SHoP Architects)

Developers are asking CPC to allow for the reconstruction of the Tin Building by folding it into Pier 17's ULURP — if the CPC approves the "minor" modification, the Tin Building would not require any other major city approvals to build.

Watch the DCP's Richard Suarez present the Pier 17 modification plan to CPC on Sept. 19 here (the presentation begins at 1:25:54).

In March, the Landmark Preservation Commission approved the developers' rather unusual plan of lifting and rebuilding a landmarked structure. The Tin Building — for decades a hub for the Seaport's Fulton Fish Market, which moved to The Bronx in 2005 — would be dismantled, and reconstructed further east, away from the FDR, and higher up, in accordance with new flood maps. 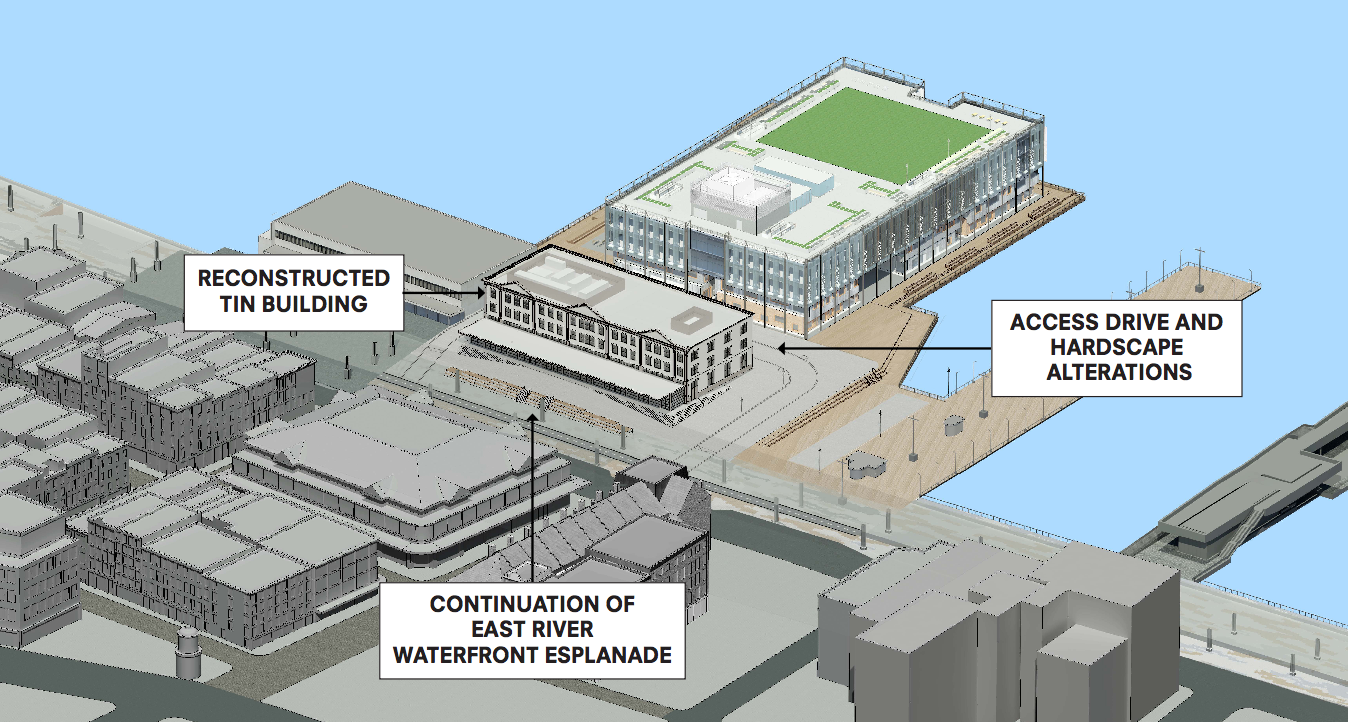 A look at the reconstructed Tin Building, in its new, elevated position on the waterfront. (SHoP Architects)

The developer plans to transform the Tin Building into a 40,000-square-foot seafood-inspired marketplace, helmed by noted chef Jean-Georges Vongerichten.

Some preservationists, including the group Friends of South Street Seaport, however, have cried foul over the rebuilding of Tin Building, in large part because, they contend, the developer is slowly rebuilding the Seaport in a piecemeal fashion, moving forward with a larger mixed-use project by breaking it into smaller portions, skirting a fuller review process by the city.

"To date, HHC and EDC [Economic Development Corporation] have used several strategies to gain approvals for Seaport waterfront development that raise serious concerns regarding the validity of the oversight process," FOSS wrote in a September letter to the CPC and city officials. "They have used disjointed agency mandates and reviews to their advantage in gaining approvals for narrowly-defined and carved out components of major development plans which subtly expand the scope of a project without incurring further comprehensive review and consideration of full combined impacts."

In August 2015, the developer had submitted plans to the city for a mixed-use project that included the Tin Building overhaul as well as tearing down the neighboring New Market Building and building a hotel.

Previously, Howard Hughes had presented plans to the community for a soaring, nearly 500-foot condo tower at the New Market site. But because of community pushback, the developer has repeatedly said it has nixed the mixed-use plan — and there will be no tall building on the New Market site.

However the developer still has the option to tear down the New Market Building — another dilapidated fish market warehouse that locals have long fought to save — and rebuilding on that site.

At a recent CB1 meeting, Howard Hughes' lawyer, Paul Selver, said that any building on the New Market site would require its own ULURP, an extended land use approval process that ultimately requires City Council approval and more expansive environmental impact review.

CB1 gave its support to the Pier 17 minor modification at a recent meeting — though they were concerned about an access road that would circle around the back of the new Tin Building. The board asked to ensure that delivery trucks would only be allowed at certain times of the day, and there would be traffic agents at the site to help with traffic flow and safety.

According to a spokesman for the CPC, the commission will vote whether or not to approve the minor modification to the Pier 17 ULURP "at a later date."

VIDEO: Man Tosses Kids to Ground After Trying to Sexually Assault Their Mom