BROOKLYN — It’s been more than two months since news broke that the MTA could bring F train express service back to Brooklyn, but the agency still hasn’t addressed questions and concerns over the plan, which would impact thousands of commuters, local leaders say.

Under the plan, express service would run from Church Avenue to Jay St-MetroTech, stopping only at Park Slope's Seventh Avenue during morning and evening rush hours.

"[W]e have been hearing a loud, growing chorus of voices within our community, all of whom stand to lose a significant amount of F-train service if the proposal as it stands is implemented," Community Board 6 leaders wrote in a July 22 letter to MTA Chairman Tom Prendergast.

Community Board 6, which includes Cobble Hill, Carroll Gardens, Red Hook, Gowanus and Park Slope, is home to almost all the impacted local stops.

If express service is restored, the MTA plans to split the existing number of F trains between express and local stops. Because the agency would be unable to add more trains to the line "due to rolling stock and track capacity limitations," it would be forced to cut service at local stations by 50 percent, according to the MTA's feasibility study released in May. 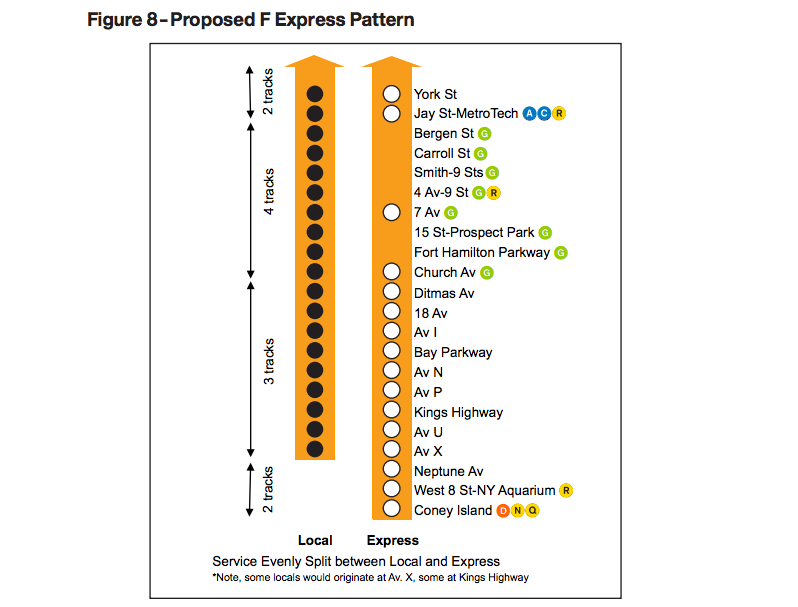 The community board, which invited the MTA to attend its September transportation committee meeting, said it wants to have a "meaningful, transparent dialogue" before any final decisions are made.

Here's what we know about the proposal so far:

► Who are the winners?

“[T]his service change will help F riders in South Brooklyn with the longest commutes,” the MTA said in its report. Commuters who travel to and from Church Avenue and Coney Island-Stillwell Avenue stand to see the most improvements, MTA has said, and riders at Park Slope's Seventh Avenue will see some improvement, too.

► How much will the changes improve their commute?

The proposed service would shave an average of 3.4 minutes a day off express riders' morning commute, according to the MTA. If you commute every weekday of the year and take two weeks off for vacation, that adds up to 14 fewer hours a year that you’re on the F train.

► Who are the losers?

Riders at Bergen Street, Carroll Street, Smith-Ninth Street, Fourth Avenue, 15th Street-Prospect Park and Fort Hamilton Parkway would see a 50 percent reduction in trains and would wait between two and two and a half minutes longer for the train, according to the MTA.

Commuters at Bergen Street and Carroll Street will be particularly hard hit, with “larger exit surges” at those stops because of less frequent trains.

The MTA has also said "the F is at its most crowded between Bergen St and Jay St" during morning rush hour towards Manhattan.

Red Hook commuters would "stand to lose the most," Community Board 6 leaders said in their letter to MTA. For years the neighborhood, which has no subway service, was a "two-fare zone" because commuters had to pay for a bus to take them to the train, where they had to pay the fare again. That issue was solved nearly two decades ago with the arrival of MetroCards that allowed free transfers between buses and subways.

"With regard to the challenge of having fairer access to public transit resources, what was cured with the rollout of the MetroCard may now be eroded with F express service," Community Board 6 leaders said in their letter to MTA. "That's not progress."

► When is this supposed to start?

The MTA would look to implement express service in early Fall 2017 if approved, though the agency’s board will make the final determination.

Brooklyn Councilman David Greenfield, who represents Borough Park, Midwood and Bensonhurst, has been strongly advocating for the restoration of F express service, which would favor his neighborhoods. Greenfield announced the proposed return of express service in May.

► Who is against it?

A host of elected officials representing parts of brownstone Brooklyn, including Rep. Nydia Velazquez, who called the plan “unfair,” have come out against the MTA's current proposal. Local residents are also speaking out — a petition that calls for the MTA to address community concerns and improve F train service for all Brooklyn riders has garnered more than 3,500 signatures so far.

► Has the MTA responded at all?

The state agency maintains that the process is still in its early stages and they plan to "actively engage and solicit input" from the community. A date for a public hearing on the proposal has yet to be announced.

► What don't we know yet: How it could affect rents and home prices

Real estate broker Beth Kugel of Halstead Property said househunters have been asking her about what F train express service would mean for Carroll Gardens, a similar trend to the chilling effect some realtors have experienced with buyers avoiding Williamsburg real estate due to the looming L train shutdown.

“[it] is concerning to me how it will impact Carroll Gardens and Cobble Hill,” Kugel said of the threat of changed F train service.

Home buyers have counted on easy access to Manhattan from those neighborhoods, but now that’s under threat, Kugel said. The possible loss of subway services comes at a time when residents are flocking to new developments in the area, such as the two new rental buildings on the Gowanus Canal that will eventually have 700 units, Kugel noted.

"We have lots and lots of new owners and renters moving into the area," Kugel said. "To me it's a little baffling that this would be a time they would even be considering limiting stops on a train in an area where we have more and more population. The idea of limited service seems to me almost counter-intuitive."

'I'm not Gonna Have a Lease Anymore,' Man Says After Stabbing Roommate Dead

MAP: Who Owns All the Property Along the Gowanus Canal