By Irene Plagianos |&nbspJuly 21, 2016 4:32pm
@IrenePlagianos
Twitter Facebook Email More
The Fritz Koenig sphere sculpture moved to Battery Park in 2002 after being pulled from the rubble at Ground Zero. It will now be moved to Liberty Park at the WTC site.
View Full Caption
New York Landmarks Conservancy

FINANCIAL DISTRICT — A 25-ton bronze sculpture that became a symbol of resilience after Sept. 11 is returning to the World Trade Center site — but not to its original home.

Artist Fritz Koenig's Sphere —  which was pulled from the wreckage of the World Trade Center nearly 15 years ago damaged, but not destroyed after 9/11 — will be placed at the WTC's newly opened Liberty Park, an elevated, leafy oasis that overlooks the 9/11 Memorial Plaza.

Port Authority officials voted unanimously Thursday afternoon to move The Sphere, a globe originally designed to symbolize world peace, from its home in Battery Park into Liberty Park before the end of the year, officials said. The sphere had been at Battery Park since 2002 when it was rededicated as a memorial to those who died and an icon of hope. 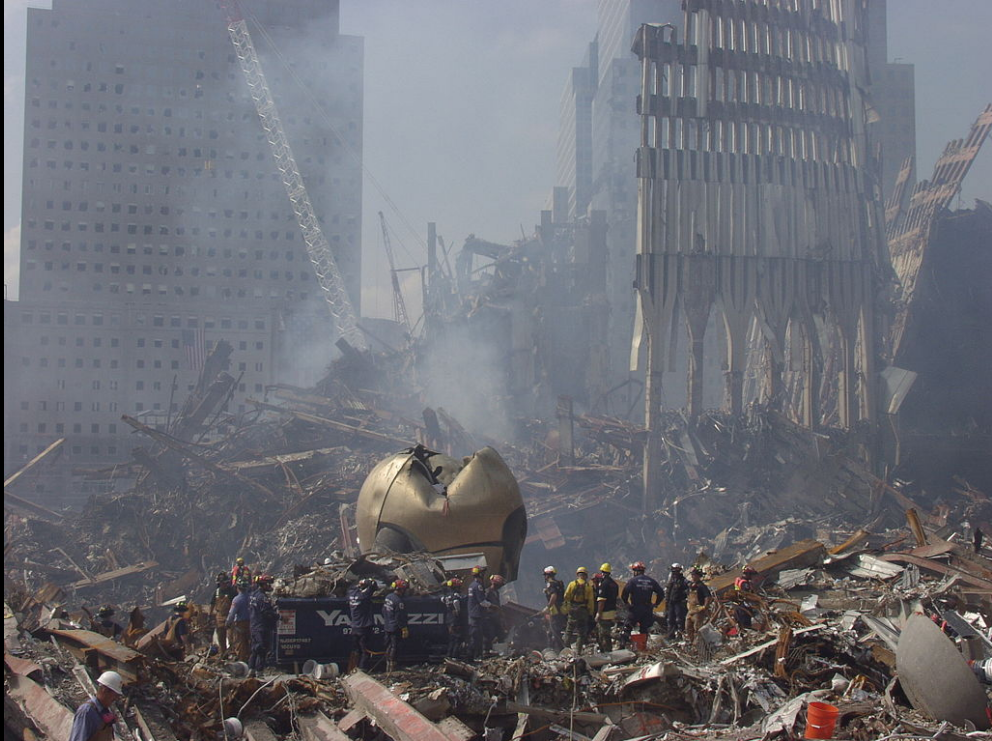 The Sphere, which once sat between the Twin Towers, was salvaged from the rubble on 9/11. (Wikimedia Commons)

The decision comes after years of debate about where the giant sphere would ultimately rest. Its placement in Battery Park had been deemed temporary by the Port Authority, which owns the sculpture, while scores of people — residents, families of 9/11 victims, survivors and first responders — have long demanded that 27-foot-high sphere return to its original location, where the 9/11 Memorial Plaza now sits.

While many, including the Battery Park Conservancy, the nonprofit that manages the Battery, wanted to see the Sphere moved, not all in the community were happy with the decision to bring the sculpture to the park, instead of the 9/11 Memorial.

At Thursday's Port Authority meeting, several people voiced concerns about the sphere being placed at the park, some saying it would create too much of a tourist attraction in an area meant to be a peaceful place. Others held that the sphere should simply return to its actual home, join a plaza that's meant to memorialize those who died, or be given a permanent home inside the 9/11 Museum.

“The sphere belongs on the memorial plaza — it can restore some dignity, some gravitas to the site,” said Richard Hughes, a co-founder of the Twin Towers Alliance, a citizens watchdog group for the WTC site. “Now it’s a place where people are playing Pokemon GO, rather than paying their respect.”

The 9/11 Memorial has long said that the Sphere was not part of its original plans, so it can’t be placed there.

Pat Foye, the executive director of the Port Authority said Thursday that the 9/11 Memorial and Museum is “unalterably opposed" to siting the sphere on its property, and there's nothing the Port Authority can do about it — however, he enthusiastically endorsed the Sphere's new Liberty Park location.

"I wholeheartedly recommend that you vote to bring the Sphere back home," he told the panel of Port Authority commissioners.

Foye also said that the relocation of the Sphere is being embraced by the St. Nicholas National Shrine, a reincarnation of St. Nicholas Church, the longtime Greek Orthodox Church that was destroyed on Sept. 11 that is still being built atop  Liberty Park.

Michael Burke, whose firefighter brother was killed on 9/11 and has long led the charge to bring the Sphere back to the WTC site, said that he's now onboard with the Liberty Park location.

"I toured this site the other day, and I think it provides a quiet place [for The Sphere], someplace unobtrusive and peaceful," he told the board.

The 92-year-old German artist behind the globe, Fritz Koening, has also said he is pleased with its new location.