Teens are Tackling Racism by Staging a Play About Police Brutality 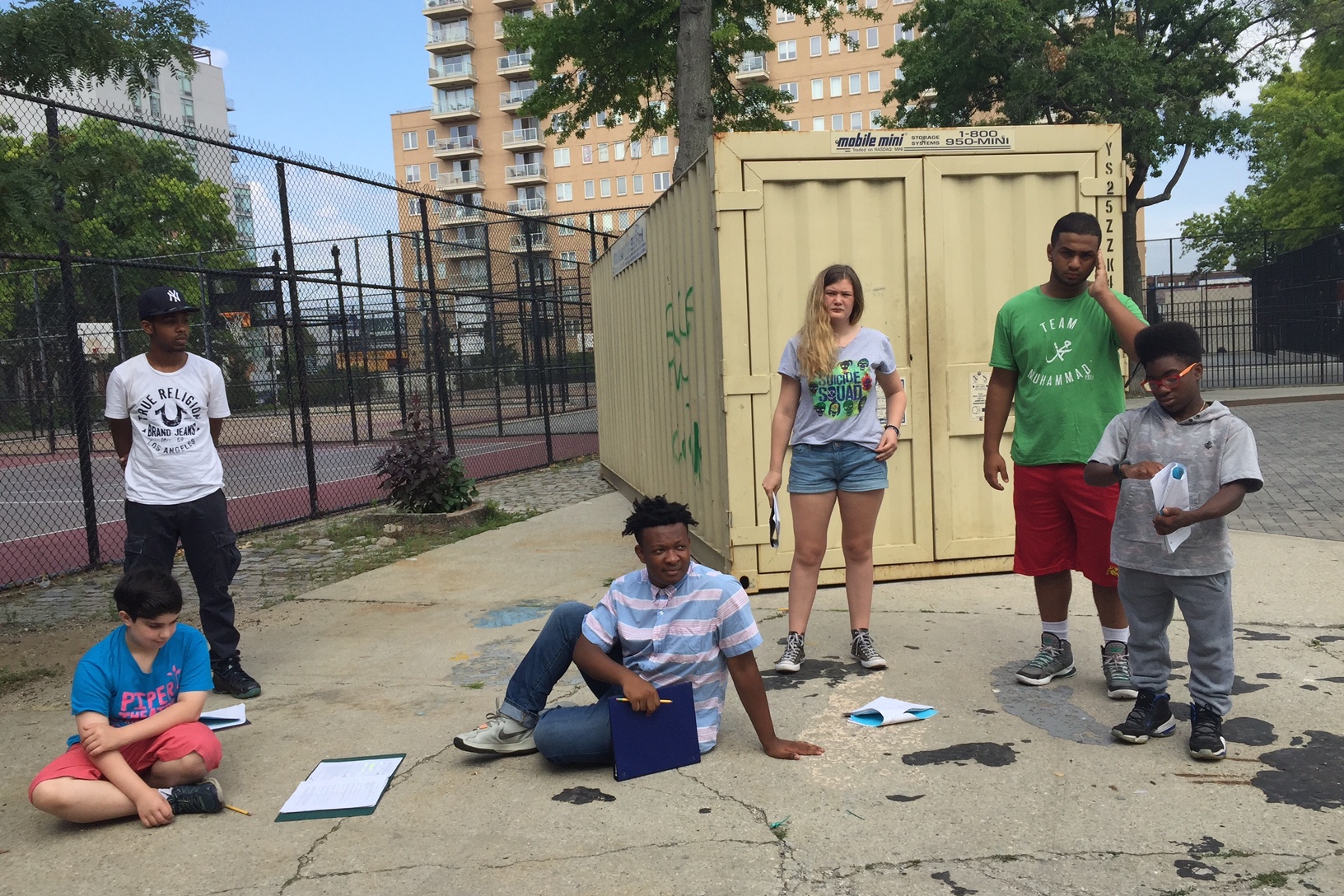 PARK SLOPE — Shaqur Williams still feels raw about the time police officers confronted him about a block away from his Bedford-Stuyvesant home.

He said the officers, who demanded to know if he had drugs on him or knew where to buy them, approached him as he was walking home two summers ago.

Williams is now channeling his anger into art, working on a play about police brutality with teaching artists from Off the Page Education.

They’ve adapted the young adult novel, "All American Boys," which tells the story of a black teen, Rashad, whose violent arrest is captured on video that goes viral, and the story of white teen, Quinn, who grapples with speaking out after witnessing the beating by an officer, who is a family friend.

The immersive, site-specific piece will be performed by a racially diverse group of public school students, who auditioned for the parts from around the city, alongside professional adult actors, from July 25 – 30, in and around Park Slope’s M.S. 51 and Washington Park. 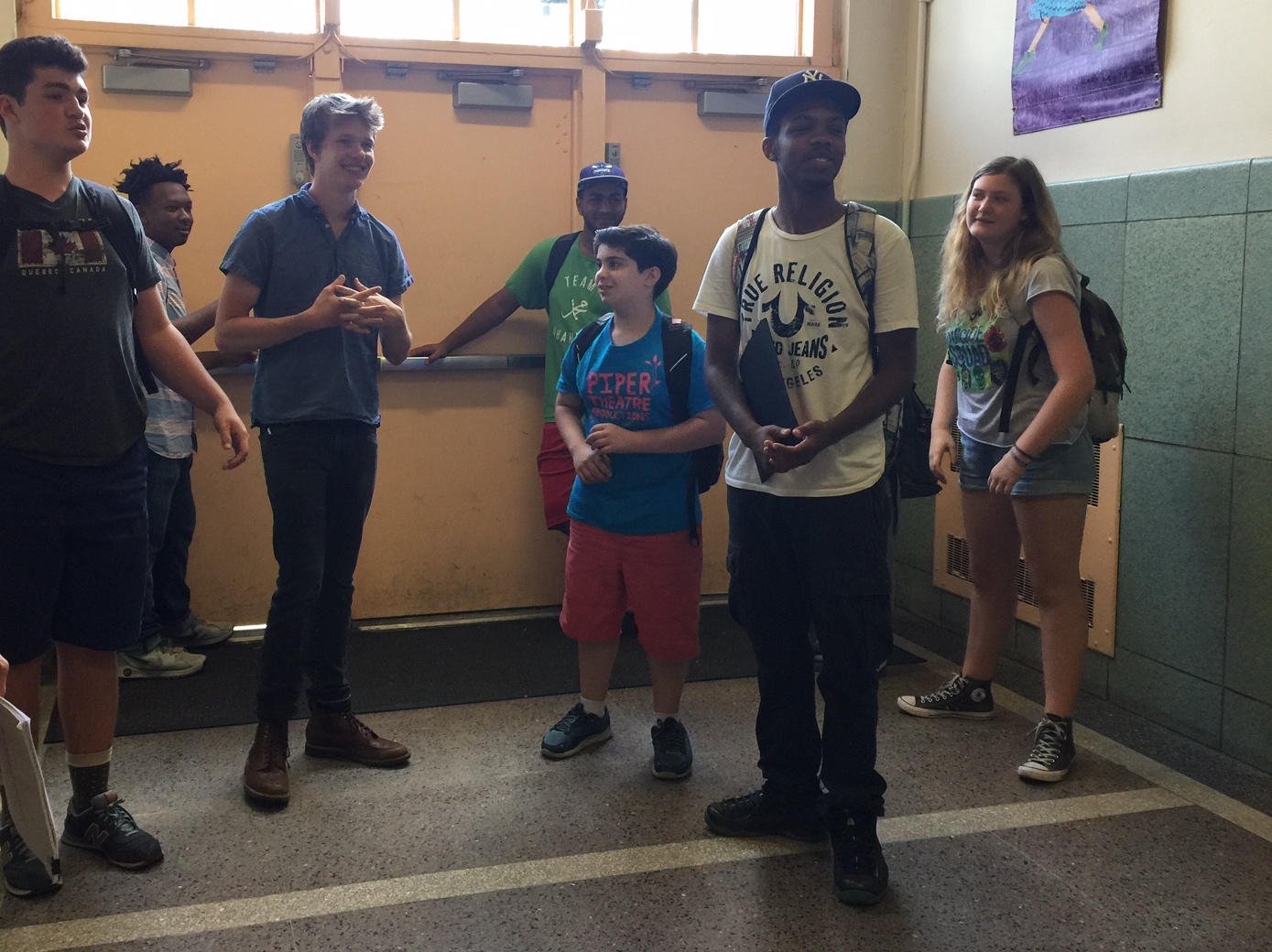 Shaqur Williams, second from right, inspired the teaching artists from Off the Page Education to do a play about racial profiling.

When Off the Page’s co-directors Jody Drezner Alperin and Vicky Finney Crouch contacted the book’s authors about the project in January, they knew the young people they work with in the city’s schools were grappling with the deaths of Trayvon Martin, Michael Brown and Eric Garner, among others, at the hands of police.

Drezner Alperin wants the students to engage with each other on the difficult topic of racism, she said, but the group sets certain rules, like you can only speak your “truth” and not someone else’s.

After a conversation, she added, “You have to accept there might not be closure.”

Harry Seabrook, a senior at LaGuardia High School of Music & Art and Performing Arts, who plays Quinn, said talking about race — especially with kids from other races — was rare, but it has become increasingly normal among this group of budding actors.

On the first day, in particular, there was a “heavy racial discussion” where black students talked about their run-ins with police while he shared a story about a fairly innocuous time he was stopped over a MetroCard.

After sharing, he thought he made a gaffe what would divide the cast.

That, however, didn’t happen. Instead the conversations continued.

“I didn’t realize you could have these discussions [about racism],” Harry said. “It’s like people, who can see, trying to describe colors to people who are blind: White people just don’t see this stuff. They can’t.” 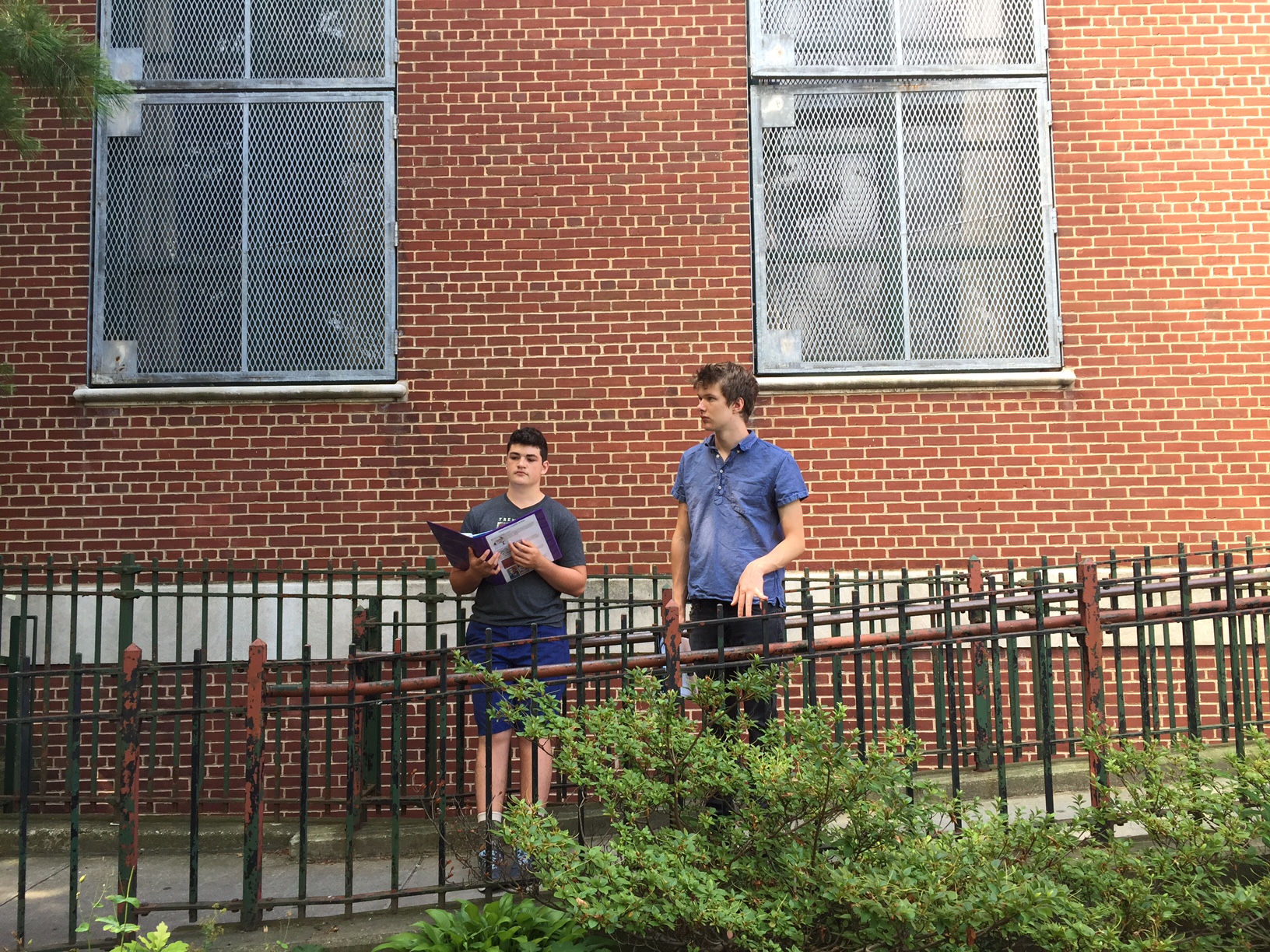 Harry Seabrook, right, rehearsing his role as Quinn, said he's learned a lot from the conversations about race with his fellow cast members.

“I feel sort of like Quinn,” he said of his character. “If society wants to tell us that white people have all the power, still, in this country, like they say in Spider-Man, with great power comes great responsibility. We’re the ones who have power. We’ve got to change it too.”

Tahj Smith, who plays Rashad, recently graduated high school from NEST+M, a gifted and talented program on the Lower East Side, which had a lot of “different types of people,” he said, but they usually only mixed during artistic endeavors, like his comedy troupe or in plays.

“Anything that has to do with art was always diverse because art has no boundaries and art doesn’t discriminate,” said Smith, who signed onto the project after reading by the “powerful” book.

He especially liked how the directors told him they didn’t want this to be a play that would simply allow white people to say, “Oh, I saw a play about race,” but offered something deeper.

“It’s kind of refreshing to do political theater, especially with young people,” she added. “They don’t get to do this because I think people feel that it’s too hard and the subject matter is too difficult and they can’t handle it and we should protect children from the outside world.

“But we shouldn’t because they have this world,” she continued. “It’s their world.”

Sam Dhobhany, a former M.S. 51 student in the show, hopes the play will help convince the audience to keep pushing for change.

“All of these incidents have been happening, and people are, like, giving up, like what can we do?” he said. “We need to do everything in our power to prevent these issues, and we’re not going to back down from this fight we’re facing until we see a change.”

Schools Chancellor Carmen Fariña last week wrote a letter to educators and families that it was incumbent on them to discuss these challenging issues and create "a safe space" for students to do so.

“I strongly believe that as New York City educators and parents, we have a moral obligation to address the difficult questions about race, violence, and guns, and to engage students in the critical work of healing our country,” Fariña wrote, as first reported by Chalkbeat. “We must not avoid these tough conversations—they are necessary if we hope to build a just society for all.”

"All American Boys" will run from July 25-30 at M.S. 51 and Washington Park in Park Slope. It's presented by Off the Page Education, which is in residence this summer at Piper Theatre Productions.  The event is free, with a suggested donation of $5, but space is limited. Tickets can be reserved online.  There’s “talk back” open to the community on July 25 at the Old Stone House with the cast and crew, Brooklyn Borough President Eric Adams and the book’s authors Jason Reynolds and Brendan Kiely.