'Shared Streets' To Limit Car Traffic in FiDi for One Day

FINANCIAL DISTRICT — The many narrow crowded streets of the Financial District may get a bit of a respite from the congestion this August.

The city announced it will try out its first-ever "Shared Streets" day — limiting car traffic, while pedestrians and cyclists are free to roam in a 60-square-block swath of FiDi.

The program, slated to run on Aug. 13, from 11 a.m. to 4 p.m., is something of an extension to the city's annual "Summer Streets" event, which closes all car traffic on nearly seven miles of city streets from the Brooklyn Bridge to 72nd Street between 7 a.m. and 1 p.m., during the first three Saturdays in August, and offers a host of family friendly activities.

For the Shared Streets area, cars will still be allowed on the roads, but they'll have to first go through NYPD-manned "traffic entry points." Cars are also being encouraged not to go above 5 mph. Traffic will be limited from the Brooklyn Bridge to the Battery, between Broadway and Water Street. 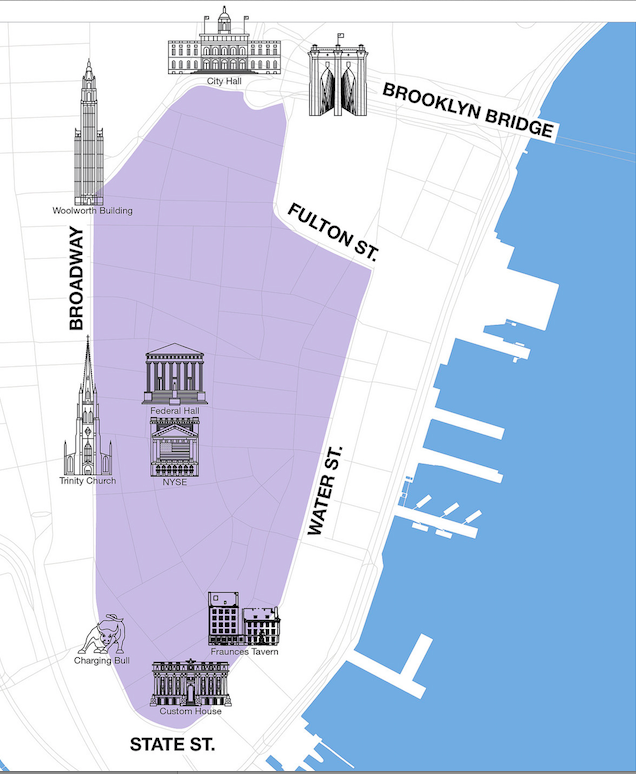 Map of the Shared Streets event. (Courtesy of the Department of Transportation)

Along with curtailing the car congestion, there will be "cultural programming, walking tours and other activities," according to the city. The Department of Transportation did not immediately return a request for further details about the events.

The mayor's office said Shared Streets marks "the first time a major American city had limited traffic on an even wider scale."

The congestion of tourists, cars and pedestrians in Lower Manhattan on the numerous winding, often narrow streets of the Financial District's colonial grid have long been an issue Downtown.

Several plans over the years have called for some form of limiting traffic in the neighborhood.

As transportation blog, Streetsblog New York City points out, Shared Streets is also something of a "test of concept" for an idea the DOT proposed three years ago in its Sustainable Streets report.

The DOT suggested creating some limited traffic zones, with expanded pedestrian areas in the Financial District. “Shared streets — pedestrian streets with very slow vehicle access — could complement or be central to such an initiative,” the DOT wrote.

"Closing streets to traffic, or limiting it, will open up boulevards and alleyways to bikers and pedestrians. When that happens, you are likely to find yourself winding down routes you might typically overlook,” Lappin said.

“That experience is something I’d encourage everyone to enjoy across the city, especially in Lower Manhattan, where much of the neighborhood was designed centuries ago with foot traffic in mind — I hope that in the future we have more opportunities to open the neighborhood up for this kind of exploration.”

How to Sell Your Used Belongings in New York City