BED-STUY —  Several Brooklyn bodegas were raided Wednesday, a day after 33 people were hospitalized for overdosing on K2.

New York City Sheriff officers went into the Big Boy Deli — which sources described as the main distributor of the drug — at 930 Broadway about 3:30 p.m. looking for the synthetic drug and any other infractions of city law, authorities said.

Officials also searched three other bodegas on Broadway and one at 107 Marcus Garvey Blvd. and arrested two people for untaxed cigarettes and one for an open warrant, but did not find the drug in any of the delis.

Tuesday's mass overdose left nearly three dozen people staggering in the streets and collapsed on the sidewalk, some convulsing and vomiting from the drug.

"Thirty-two plus people is a throwback to the era when we had crack dens terrorizing this community," said Brooklyn Borough President Eric Adams at a press conference near the location of the overdoses Wednesday. "It is our belief that many stores in this area are selling K2."

Deputy Inspector Scott Henderson told residents during an 81st Precinct meeting in June that the city had started proceedings in civil court to close the bodega and a smoke shop next to it.

“Unfortunately, those two locations, for whatever reason, they decided to get in the business of selling those substances and it’s just caused a mess over here,” Henderson said in June.

Sources have said that police have had problems cracking down on Big Boy because the owner is rarely there.

Manager Mustafa Alsaidi, 44, said the raid was "bulls--t" and that they stopped selling K2 a year and a half ago.

"We used to sell it here before they banned it, but we stopped," Mustafa said. "They didn't find nothing."

Yehyi Thabet, who holds the liquor license for Big Boy, said that he sold the business in January.

"I have nothing to do with it,” he said. “The cops came in four times already and they didn't find nothing."

He also claimed that Big Boy didn’t sell the drug but “they sell it next door.”

Thabet was charged with a misdemeanor summons last November for failing to pay cigarette tax, according to court records.

People on the street cheered as officers led two workers out of the deli in handcuffs after the raid.

►What is K2? The Drug Behind The Mass Overdose in Bed-Stuy Explained

Some residents called for authorities to immediately shut down businesses caught selling the drug.

“The users aren’t the problem in the sense that you take a couple of users off the streets or give them a violation, the stuff is still there," said Trevor Tyrrell, 39, who lives near the site of the overdoses.

"They’ve got to shut down the stores that are selling it, but figure out a better way to control it to even getting to the stores.

"In an effort to end the growing K2 epidemic in our community, we have the full support of the City's administration to bring programs and services to help those addicted to this chemical substance,” he said in a statement. 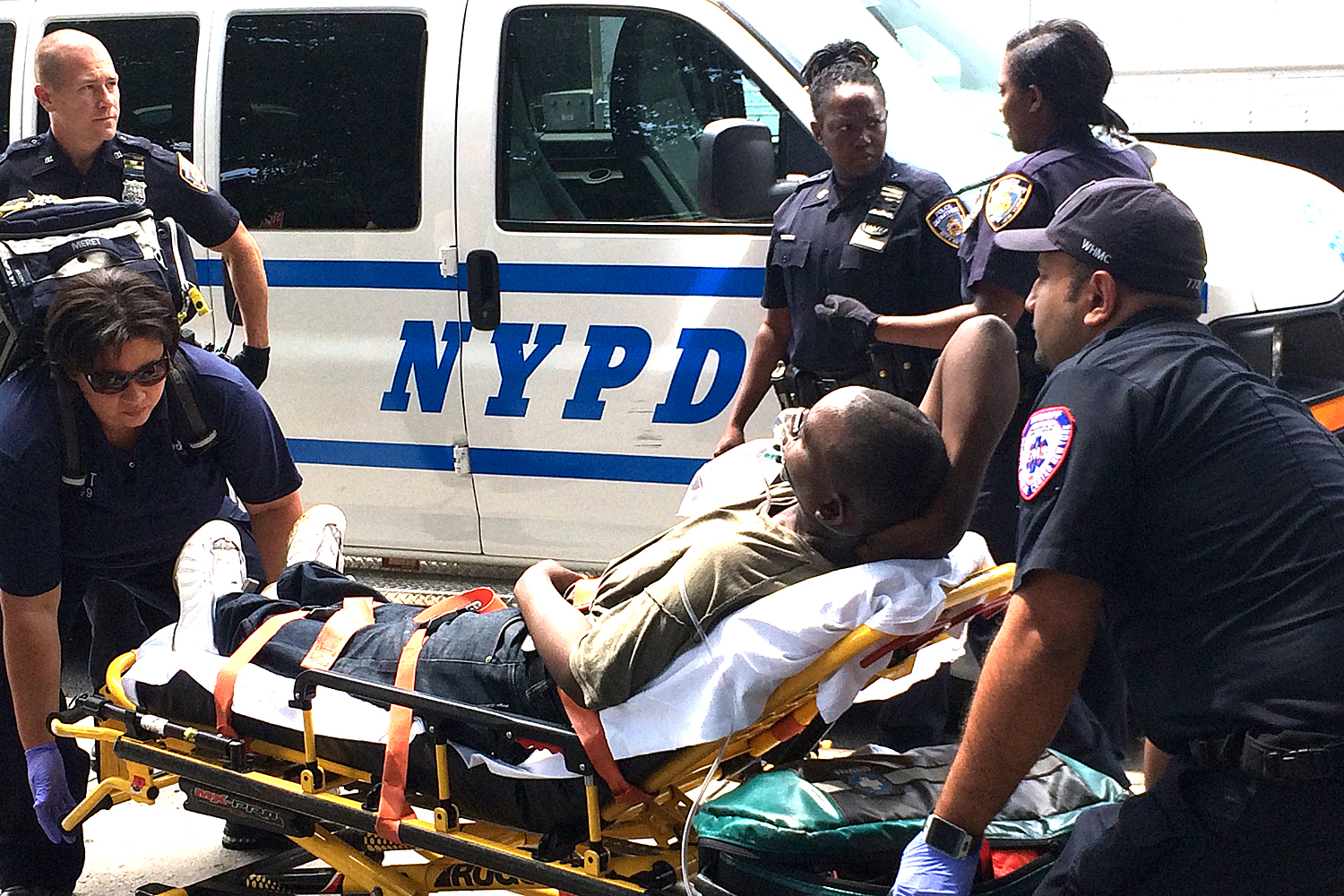 A man who residents say is known to smoke K2 was taken to the hospital after collapsing on a bench on Broadway in Brooklyn Wednesday, July 13, 2016. (DNAinfo/Kathleen Culliton)

There was an empty K2 packet laying on the bench where they had been sitting.

Mayor Bill de Blasio, speaking during a press conference in The Bronx Wednesday, described sellers of K2 as "heinous individuals" and said "help is on the way" for residents where the overdoses have been occurring.

"We will throw the book at anyone selling K2,” the mayor said. "If you're selling this drug we have the ability to shut you down. We will literally take away your livelihood.”