BEDFORD-STUYVESANT — A total of 33 people apparently overdosed on K2 on Tuesday morning near a Brooklyn intersection that's been called the epicenter of the drug's use in the city, sources said.

In what looked like a simultaneous reaction to the drug, users collapsed about 9:30 a.m. on the sidewalk and subway platforms around Broadway and Myrtle Avenue — which many call "K2 Heaven" — some urinating, vomiting and breathing heavily while others sat crumpled on the pavement, witnesses said.

"I saw two people smoking for maybe 15 minutes. Then they fell to the floor," said Rafael Perez, 50, a worker at a nearby barbershop.

► Read more: What is K2? The Drug Behind The Mass Overdose in Bed-Stuy Explained

It wasn't long before many others who smoked the drug were also overwhelmed.

"It was a scene out of 'The Walking Dead.' People were stumbling all over the place," said neighbor Brian Arthur, 38. "There was a couple of them trying to pick themselves up. One guy couldn't move at all. They had to pick him up by his pants to put him in the ambulance."

Emergency medical crews were called to 362 Stockton St., a stand-alone apartment building about a block from the intersection, at 9:38 a.m., an FDNY spokesman said.

Many of the 33 people treated were listed in serious condition after taking the drug, which is often referred to as synthetic marijuana and is made by spraying chemicals on dry leaves. They were treated at Wyckoff and Woodhull medical centers, police said.

One man appeared to have a breakdown in front of 920 Broadway on Tuesday afternoon, shaking violently and screaming, "It's burning me!"

Mike Mishiyev, 27, said she knows the man and has seen him use the drug.

K2 is typically sold in packets under brands such as Spice, AK-47, Geeked up, Smacked, Green Giant Scooby Snax, Red Giant, Mr. Bad Guy, iBlown, and Trippy, according to the city's Health Department.

"Since the chemicals found in K2 vary from packet to packet, and potency can differ even within one packet, the effects of K2 are unpredictable. People who use K2 may feel fine one time, and become extremely sick the next," the Health Department warned.

After the mass overdose, emergency workers went into homeless shelters and methadone clinics to warn people about the K2, the sale and manufacture of which was outlawed in the city in October.

"They tried to warn us that this is a bad batch," said Freddie Smith, 38, who lives in a homeless shelter Samaritan Village at 988 Myrtle Ave.

They also cautioned people inside the START Treatment and Recovery Center at 1149 Myrtle Ave., staff there said.

The drug is believed to have come from Big Boy Deli, at 928 Broadway, which a police source called "the sole distributor" of the drug in the area.

A deli worker said he didn't know why people were overdosing near his shop, but neighbors said police frequently raid the shop for K2.

"[Since] this last week, the police are coming every day and the people are still smoking. The sad thing is the police know where they're selling it. But they can't raid it every day. They raid that store once a month," Smith said.

Super Patricia Cardozo, 42, put up a sign warning people not to smoke the drug next her building at 360 Stockton St. 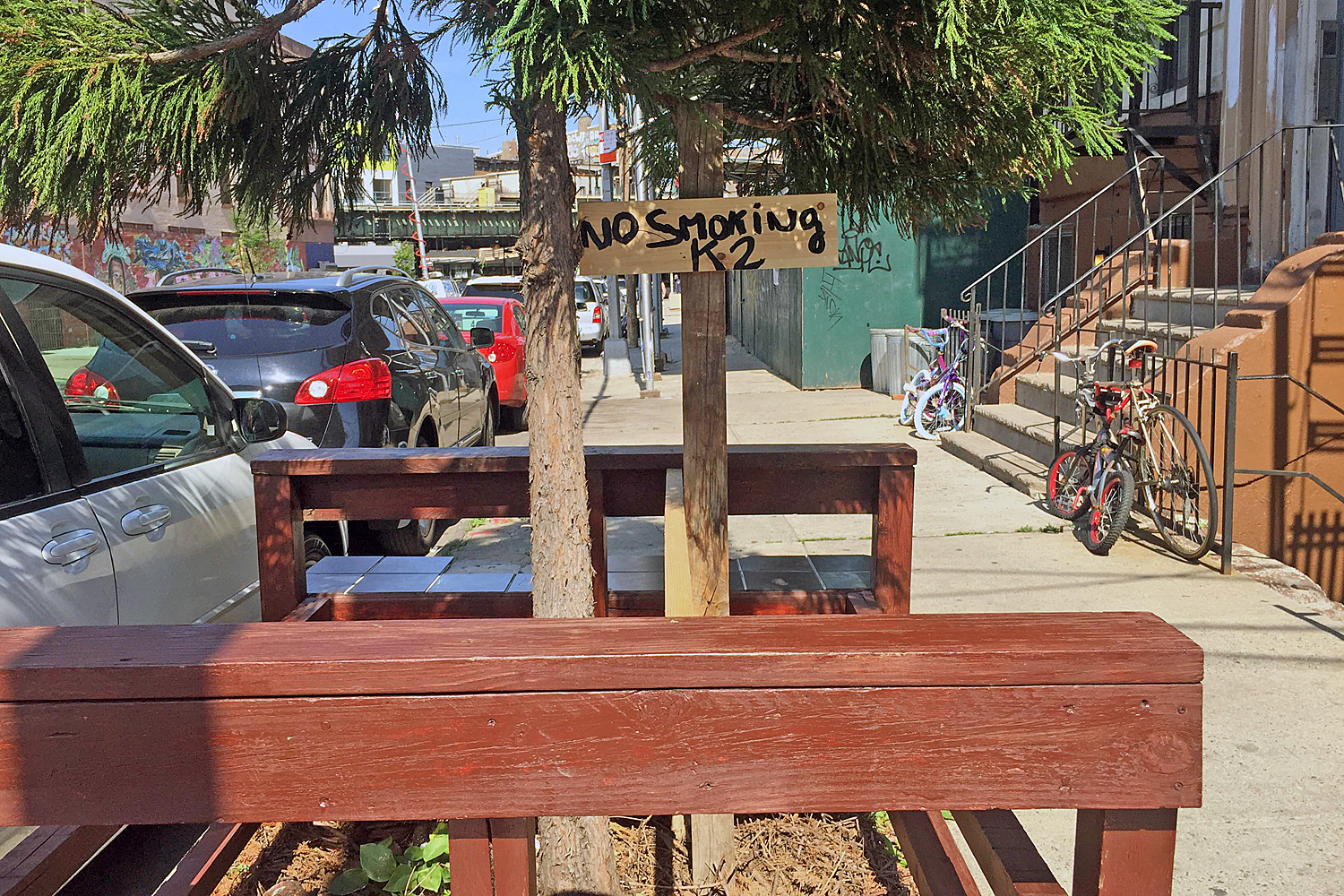 A super for 360 Stockton St. in Brooklyn put up signs warning people not to smoke K2 next to the property. (DNAinfo/William Mathis)

In May, Mayor Bill de Blasio and other elected officials celebrated a sharp 85 percent decline in K2-related emergency room visits since July 2015.

“The drop in emergency department visits is a clear sign that our strategy is working and that fewer New Yorkers are being harmed by this dangerous and deadly drug," the mayor said.

"We are investigating and monitoring ERs across the city. We remind New Yorkers that K2 is extremely dangerous," the agency said in a statement. "The City’s public awareness efforts and aggressive enforcement actions over the past year have contributed to a significant decline in of ER visits related to K2.”

But the drug's use has increased in areas of the city such as the Broadway and Myrtle Avenue intersection where locals have said it's reached "epidemic" levels and regularly leaves users strewn about the street.

"I come here every day and people are laying in the sidewalk," Smith said.