By Leslie Albrecht |&nbspJune 29, 2016 4:04pm
@ReporterLeslie
Twitter Facebook Email More
The blue section shows roughly where the First Street Basin was once. An offshoot of the Gowanus Canal that fell into disuse and was filled in, the First Street Basin will be restored and reconnected to the main canal under a plan by the U.S. Environmental Protection Agency.
View Full Caption
Google Maps

GOWANUS — An abandoned offshoot of the Gowanus Canal that's been buried under 20 feet of dirt for decades will be excavated and filled with water again, and archeologists may uncover shipwrecks, Revolutionary War artifacts and human remains in the process, federal officials said Tuesday.

The site could yield a trove of artifacts such as turn-of-the-century machine parts, pieces of barges, and foreign currency from old seafaring vessels — and given the canal's more recent history as a dumping ground for criminals both alive and dead, it's possible the site could hold guns and bodies, archeologists and historians said.

“It is totally plausible that there’s some kind of body buried there, with all the stories about mob activity there," said Joseph Alexiou, author of "Gowanus: Brooklyn's Curious Canal." "There was a body found chopped up in a suitcase just sitting by the canal one year. Who knows what kind of crime-related things you might find there. Maybe Al Capone's secret buried treasure is there."

On the other hand, Alexiou said, "It could be nothing. It could be filled in with mud and old cars."

The restoration of the First Street Basin is part of the EPA's Superfund cleanup of the polluted canal. The basin was once a branch off the main canal that ran behind the Brooklyn Rapid Transit Powerhouse — today known as the Batcave — between Carroll and Third streets. Restoring it will add 475 feet of waterway to the canal.

Bringing the basin back to its former watery glory will require removing 1,000 truckloads of contaminated dirt and other fill that has clogged the site for decades, EPA representatives said Tuesday.

The contents of the fill is a mystery, said EPA archeologist John Vetter. He'll monitor the excavation along with two archeologists hired by the city, which is responsible for completing the First Street Basin restoration under EPA's oversight.

Vetter said it's likely excavators will uncover shipwrecks at the site. Other discoveries such as Revolutionary War artifacts and human remains are less likely, he said, but they "grab the imagination." 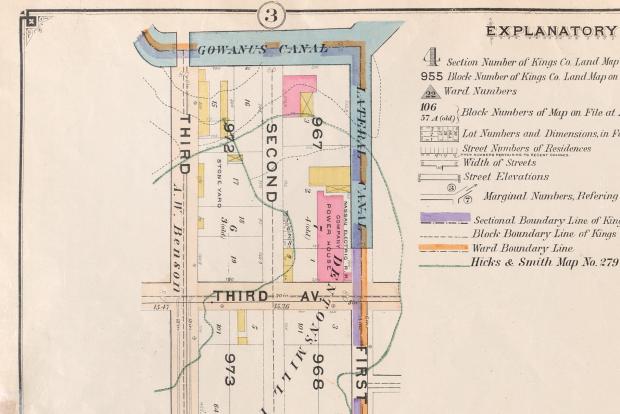 The First Street Basin is marked "Lateral Canal" on this 1898 map. The pink structure marked "Power House" to the left of the basin is now the abandoned BRT Powerhouse, also known as the Batcave. Photo: New York Public Library Digital Collections

"We're dealing with sites that have a certain level of mystery to them — they're buried," Vetter said. "It's an area of incredibly interesting use going back to pre-contact times, Revolutionary War times, and commercial development in the 1800s. ... Is there any evidence of that in the remains? It's a tough place for things to survive."

It's unclear exactly when the First Street Basin was filled in; it may have happened around the 1950s, Vetter said.

Archeologists will write an "Unanticipated Discoveries Plan" that will outline how to handle unexpected finds such as human bones, Vetter said.

Work on the restoration project should begin in 2018 and officials hope to finish it in about a year, said EPA's project manager Christos Tsiamis.

After the basin is dug out, a barrier will be installed to block it from the main canal until the entire Superfund cleanup is complete so the newly restored basin doesn't get contaminated.

Though there will be a waterfront esplanade in front of the Batcave after it's renovated into an arts center, there won't be an esplanade or other public access point at the restored First Street Basin, EPA officials said Tuesday.

One side of the restored First Street Basin will have a manmade bulkhead — a wall to stabilize the shore. But the other side will have a "soft bank" where a "wetland shelf" will provide wildlife habitat, Tsiamis said.

Eymund Diegel, an urban planner who hunts for "ghost streams" in the neighborhood, said he was excited about creating new wetlands in Gowanus, calling the plan "the first natural ecosystem restored in our neighborhood in over a century and half."

He added, "That is clearly a revolutionary concept, given our industrial and pollution history.”

Long before it was the First Street Basin, it's believed that the property was the home of Denton's Mill, an 18th century mill that sat next to a pond, Diegel said.

The First Street Basin was created in the 1870s by the chemical company H.J. Baker, which probably used it as a private canal for barges ferrying raw materials to its plant, Alexiou said. Later, when the BRT Powerhouse was built in the 1890s, vessels probably cruised up the basin to bring coal there.

Today the site is a rubble-strewn lot surrounded by private property, part of which is used as a parking lot.