Take a Look Inside WTC Liberty Park Before it Opens Today

LOWER MANHATTAN — Amid nearly 700 plantings that are 25-feet in the air, construction workers Tuesday morning were putting finishing touches on a leafy oasis that will soon be open to the public.

Liberty Park, an elevated green space that overlooks the 9/11 Memorial Plaza, will open at 11:45 a.m. Wednesday, and officials anticipate the 1.4 acre space will quickly become a favorite Lower Manhattan refuge. 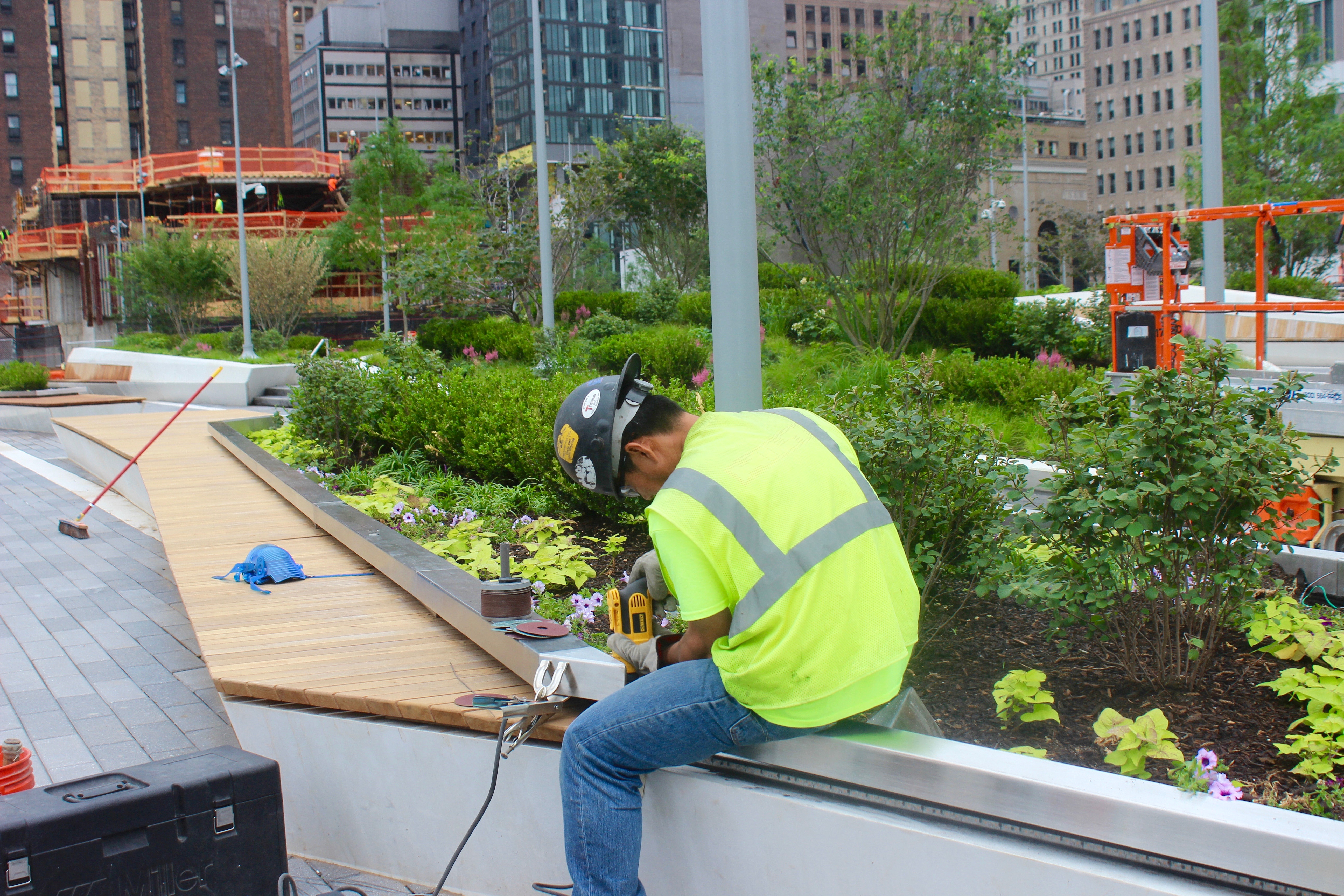 "This is really a special place, a place for the community to come, enjoy each other, the view, and reflect on the 9/11 Memorial plaza," Steven Plate, the Port Authority's Chief of Major Capital Projects said on a preview tour Tuesday morning. "We took the time to do this right, and we're proud of what this is and will become."

The park, more than an acre of space dotted with angular planters and wood benches, sits atop a vehicle security center. Plate said they knew they didn't want to just keep the roof of the security center bare.

"This is a real amenity and give back to the community, to beautify something that would otherwise just have been a blank roof," he said.

More than 50 trees are growing on the landscape, including a sapling descended from Anne Frank's White Horse Chestnut Tree. 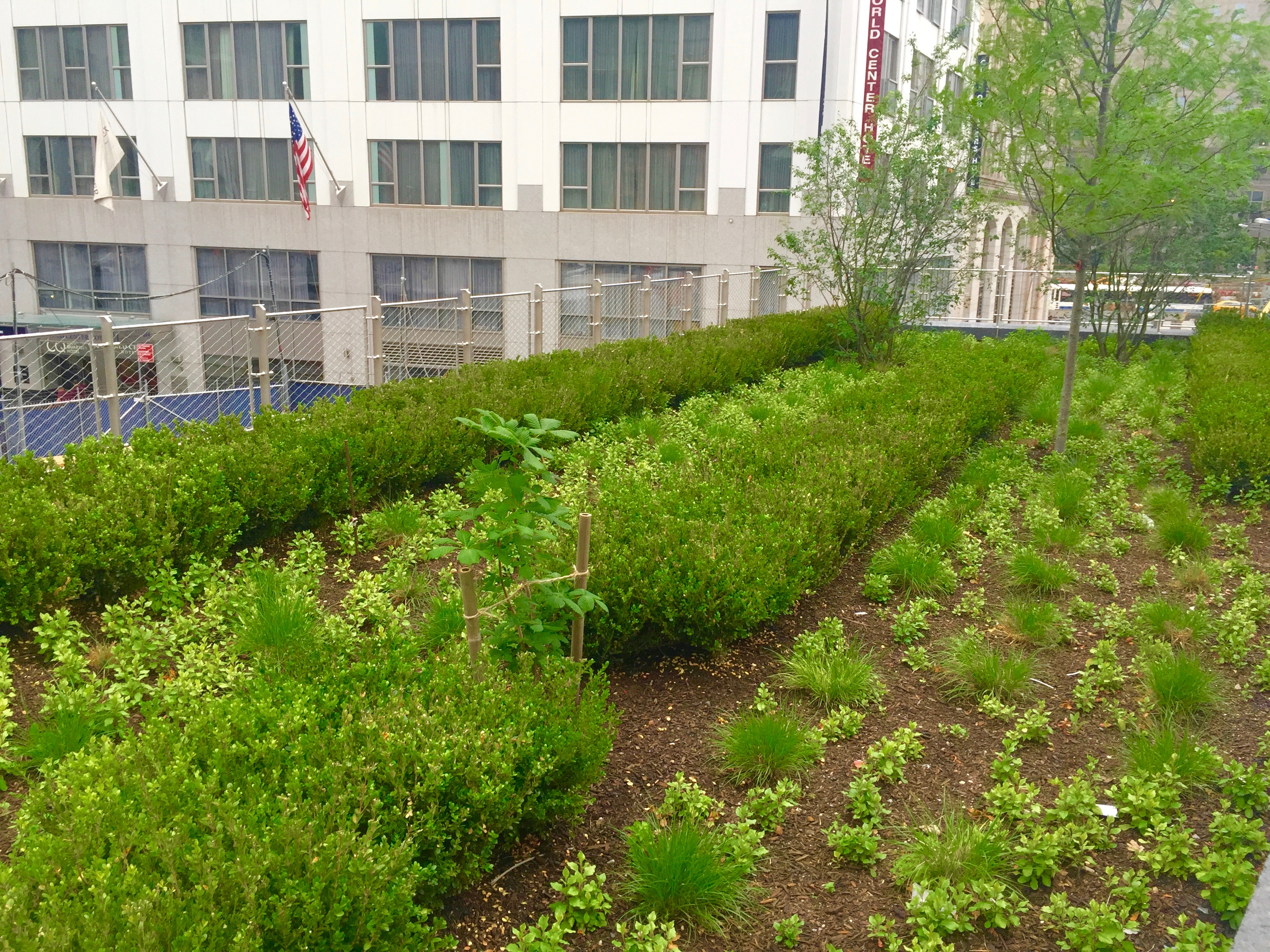 The Anne Frank sapling tree was planted several weeks ago in Liberty Park.

The special tree grew from a chestnut taken from the original tree that sat outside the window of the secret annex where Frank hid for two years from the Nazis in the Netherlands. Eleven other chestnut tree saplings have been planted throughout the U.S. in select locations, including the Holocaust Memorial Center and Little Rock Central High School.

Greenery is also covering the 25-foot-high, 336-foot-long "Living Wall" which runs along the base of the park, along Liberty Street, facing the Memorial Plaza. The wall, covered in more than 20,000 plants, is kept alive with specially made built-in irrigation system. 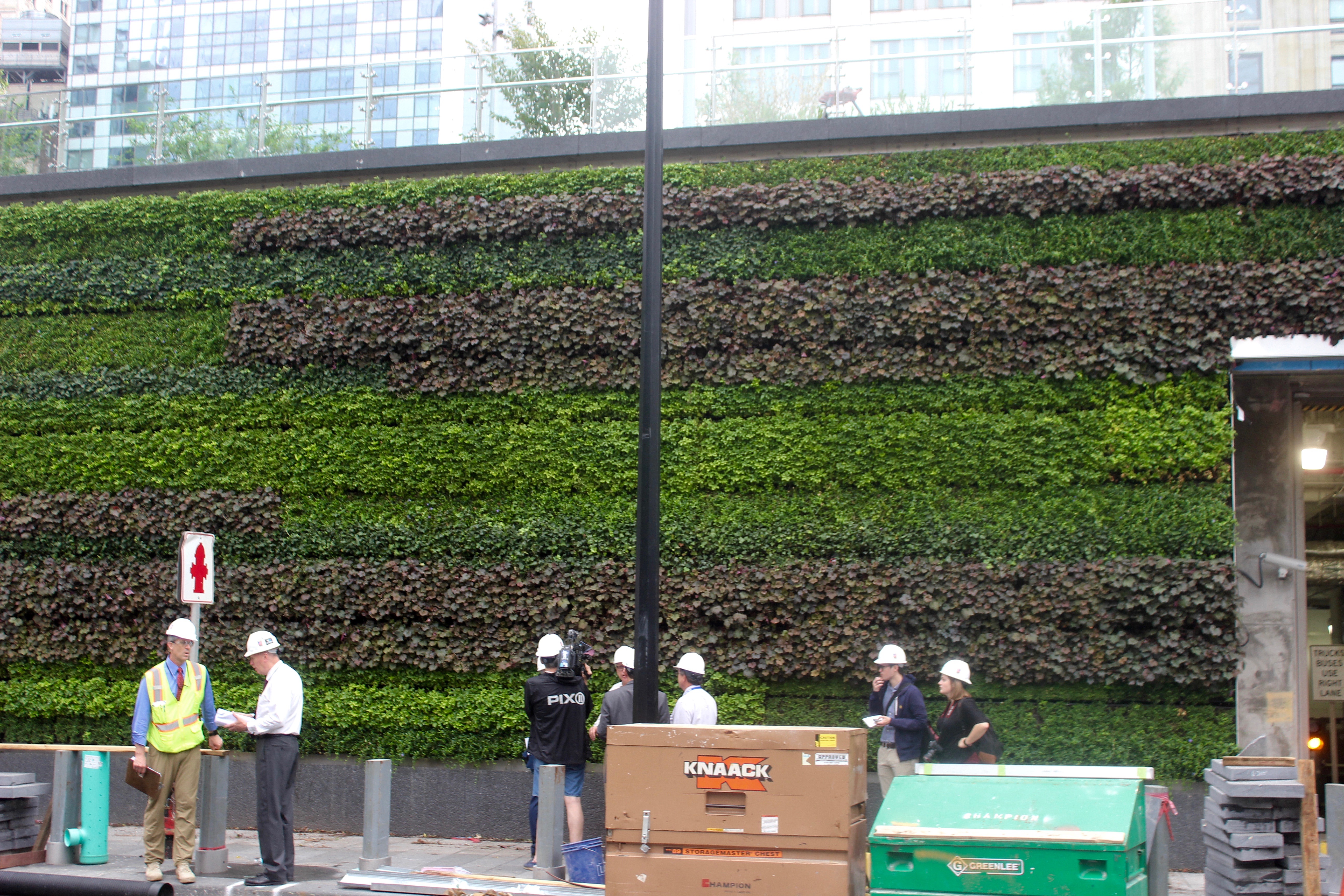 While the majority of the park will be ready Wednesday, construction will continue on one piece of Liberty Park — the St. Nicholas National Shrine, a new Santiago Calatrava-designed reincarnation of St. Nicholas Church, the longtime Greek Orthodox Church that was destroyed on Sept. 11.

The church, which sits at one end of the park, pictured below, is slated to be ready in 2019. 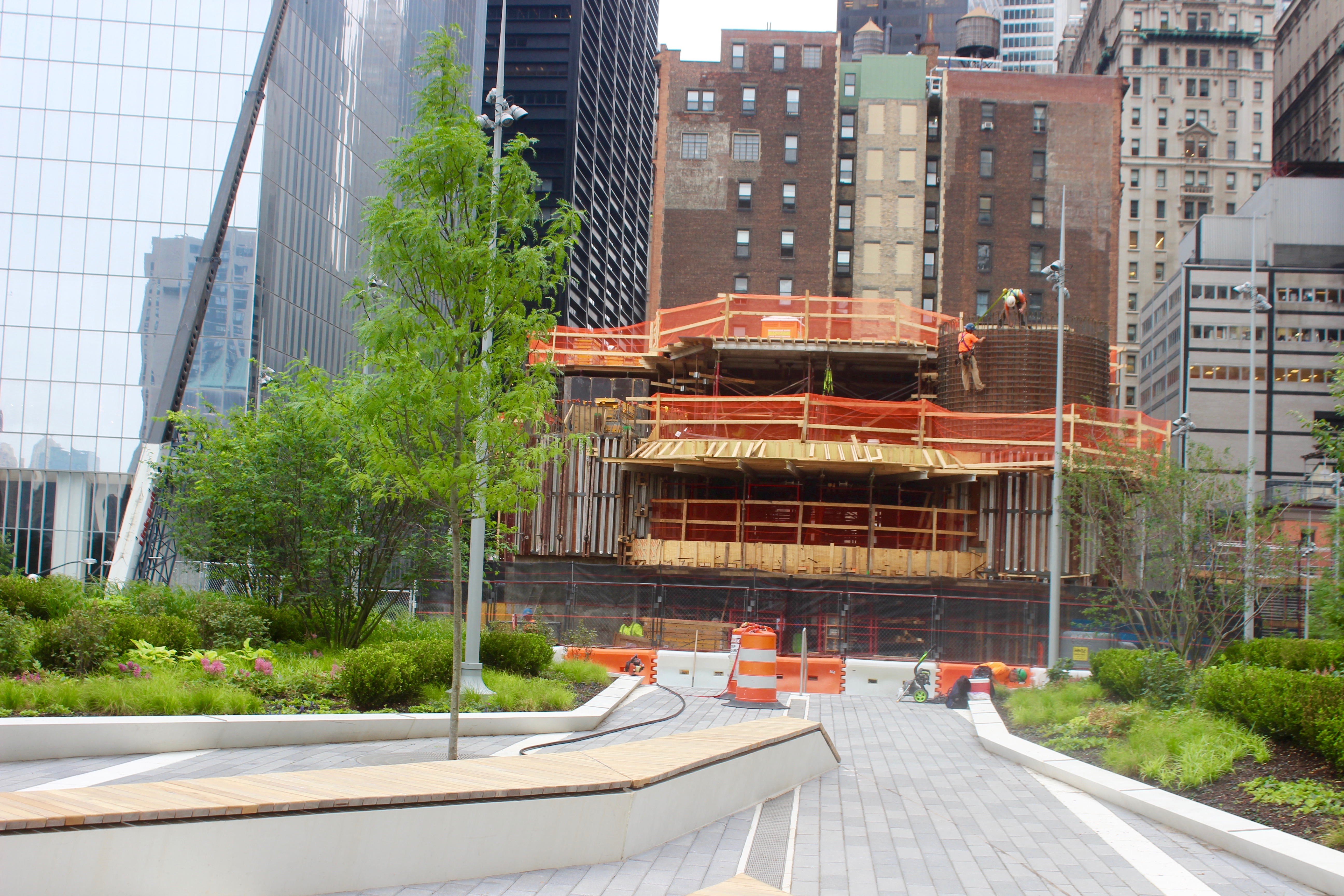 The park will be accessible from inclined ramps, a set of tall stairs, as well as covered walkway that runs over West Street from Battery Park City. 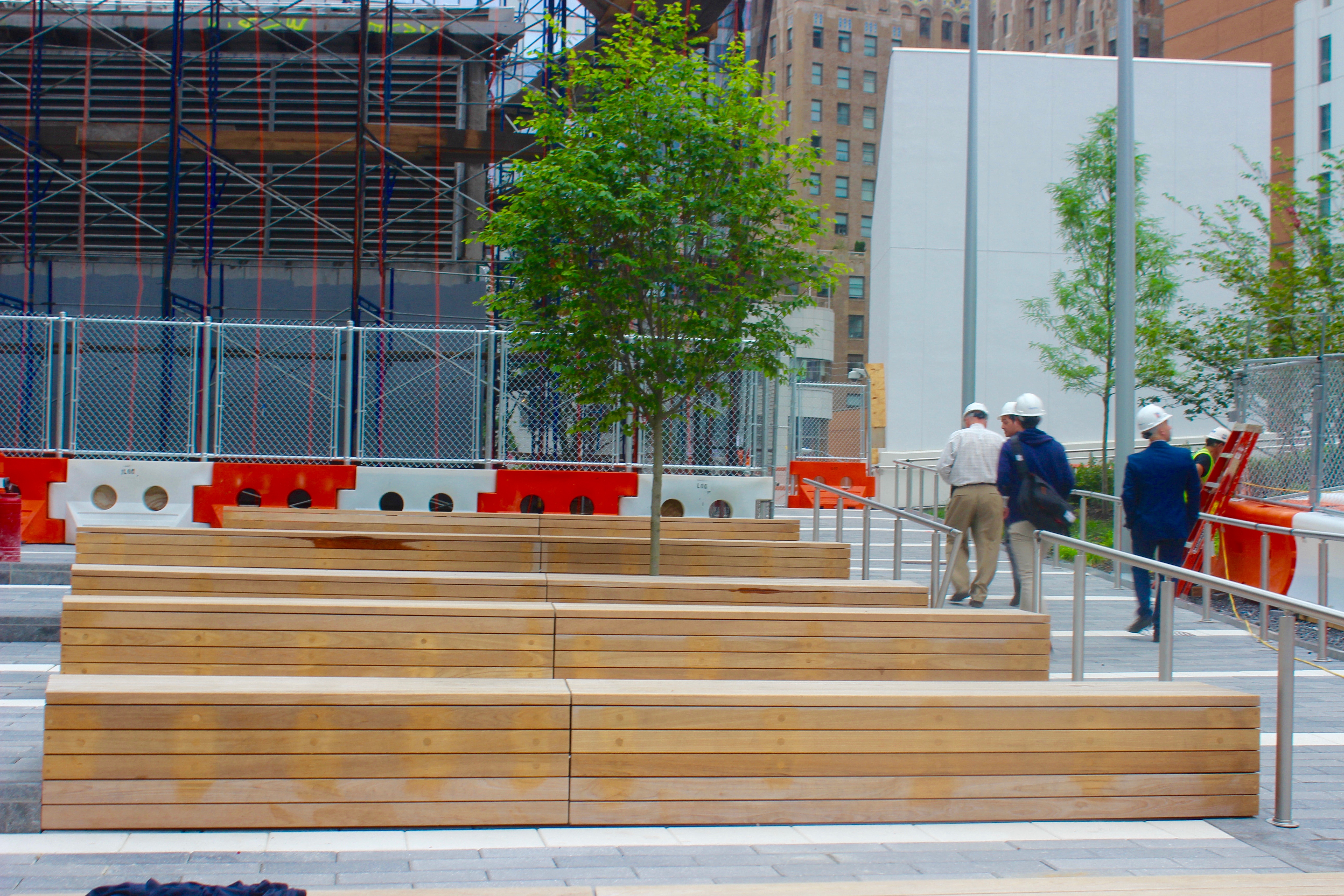 The park is also the new home of the 16-foot tall bronze "horse soldier" statue that had long made its home outside of the World Trade Center's PATH station entrance at Vesey Street and West Broadway — an entrance that has was recently shuttered with the opening of the new WTC PATH entries now available via the WTC transportation hub. 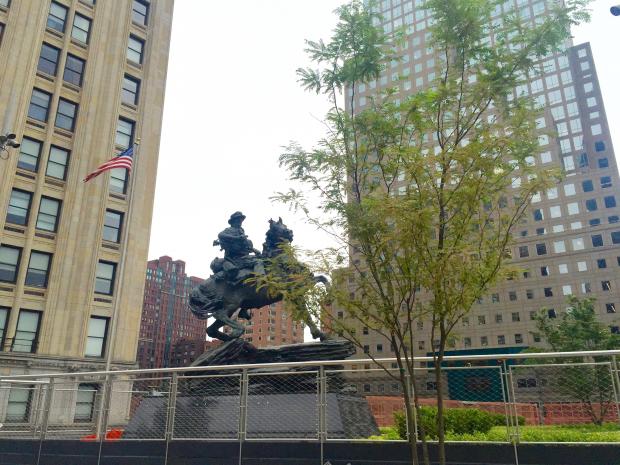 The 5,000-pound bronze sculpture "De Opresso Liber" depicts a member of the U.S. Army Special Forces on horseback leading the invasion into Afghanistan after the 9/11 attacks.

"There's a lot of emotion in this park," Plate said. "We have more work to do here and at the World Trade Center site, but we're moving forward and we're proud of our success."