MANHATTAN — Just a day after the city’s health department announced it will be posting lead water test results for day care and preschools, City Comptroller Scott Stringer released a damning audit Friday revealing that the department had failed to ensure the water was tested at nearly 60 percent of the group day care centers it examined.

The comptroller also said that the department directed staff to falsify test results in dozens of group day cares and record that they were completed when, in fact, they had not been.

“The fact that the Department of Health directed its employees to enter false information in an official database is a blatant violation of public trust,” Stringer said in a statement. “It should not take an audit to ensure that a city agency is doing its job to protect our kids.”

Stringer's audit, which examined 119 permits between August 2012 through August 2014, found that no acceptable water tests had been administered at 70 centers — despite the city's database claiming otherwise.

In addition, they found, DOH managers directed employees to lie in the database entries and say that tests had been completed.

“In an email dated December 7, 2011, [Bureau of Child Care] officials directed the borough supervisors to enter the statement ‘Water Lead Test Negative in [database] in order to issue permits,” the audit said.

Sources said the Health Department waved through the permits in order to speed up the process for centers in good standing, adding that centers were supposed to send in their results at a later date because they take a long time to come back. There was previously no clear requirements for lead water testing and the health code did not even specify when the test should be conducted, city officials added.

According to Stringer, after his audit got underway last year, health department officials immediately began reaching out to all 2,300 group day care centers under its purview to ensure they had proper water test results on file.

The city had to test the water at 440 centers in the past two months, officials noted.

The department also acknowledged that 5 percent of all its centers have elevated levels and that the city implemented proper protocols to insure safety, whether through regularly flushing out pipes or replacing fixtures.

Water is not a common cause of lead poisoning in New York City, health officials noted.  Most often, paint is implicated.

Of the 840 children under 6 years of age that were identified with elevated blood lead levels in 2014, which is the most recently available data, none were attributed to lead in water. 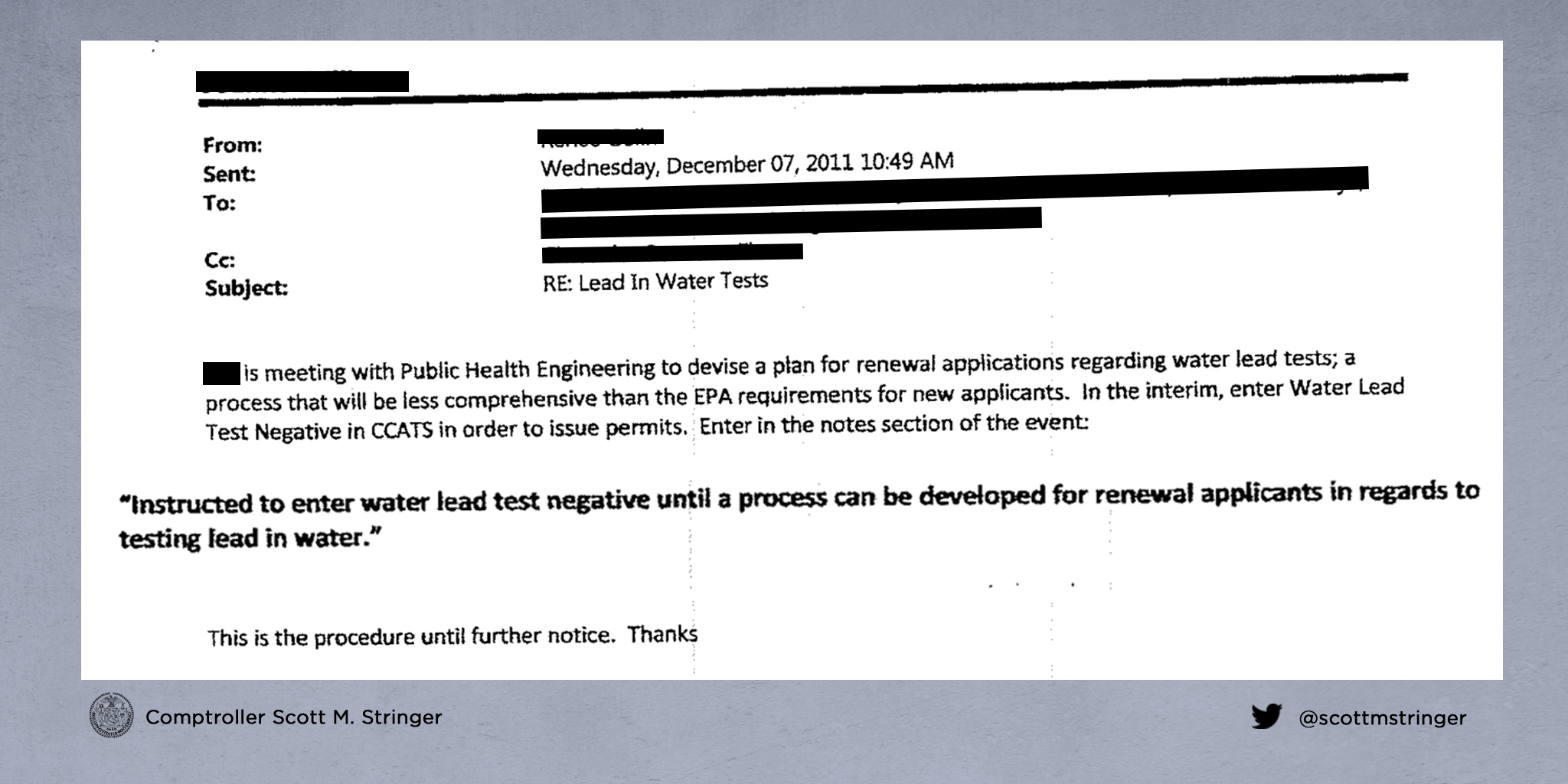 Of the 49 centers that did have water tests in the audit's sample, five were found to have unacceptable levels of lead. Three of these centers then submitted plans to implement protocols to address the issue and later received acceptable water lead tests, Stringer's office said. The names of those centers were not released.

One remediated the condition and submitted an acceptable test. In the other case, the department determined that even though there was a positive lead test, it was within acceptable ranges.

Health Department officials noted that no lead poisoning cases have been linked to day care centers and that the city's water itself meets or exceeds all federal and state standards. However, due to older internal plumbing and fixtures, lead test results may still be elevated.

While that may be the case, Stringer found in his audit, “the absence of such a case is not an indication, in and of itself, that weaknesses that increase the risk of such occurring do not exist.”

The Health Department will be adding information about lead tests in July to its Child Care Connect online directory. It also proposed earlier this month to the Board of Health to require childcare operators test for lead in water every five years, as the city’s public schools require.

Heightened awareness around the issue was spurred by reports of government agencies repeatedly lying or covering up evidence of unsafe levels of lead in water from Flint to Newark and, closer to home, in Hoosick Falls, N.Y.

“All child care centers have been tested for lead in water, and for parents’ peace of mind we will soon post the status of each test online,” Health Department spokesman Christopher Miller said.

“But the fact remains: water is not a source of lead poisoning in New York City – lead in water tests aim to ensure that aging pipes are not disturbing the excellent quality of our water. We want to be clear: our kids are not at risk.”

De Blasio administration spokeswoman Aja Worthy-Davis emphasized that the audit itself noted that no child was ever harmed "in large part due to the overwhelming rarity of lead-in-water illness."

She added, "Under this administration in June, the Health Department moved to link testing to the permitting process to help protect kids. It is a blatant mischaracterization to claim the agency systematically falsified documents based on a five-year-old email.”