How 'Hamilton' Inspired Vast Subculture of Its Own

Wednesday mornings at the Richard Rodgers Theater are never calm. Tourists and New Yorkers stand on line for hours in hopes of winning the "Hamilton" ticket lottery, though would-be audience members can also enter the online lottery any day of the week.

The theater begins accepting names at noon and announces winners 12:30 p.m. This past Wednesday, by 11 a.m. the line stretched from the theater entrance to the corner of 46th Street and 8th Avenue, where 16-year-old Raphael Kummerlandau stood with a copy of "Hamilton: The Revolution" by Lin-Manuel Miranda and Jeremy McCarter in his backpack.

"It really is a great lesson on Hamilton. I can already tell his life story just from listening to the album," said Kummerlandau. "It attracts people my age."

Kummerlandau saw Miranda's earlier play, "In the Heights," and said that his obsession with it took over his life for a year. He was able to see "Hamilton" in April and said that the musical has become his favorite. He wanted to see it again and enters the online lottery from his phone daily.

But the musical has created so much more than a rabid line of fans in Midtown. It's also spawned media projects, social gatherings, handmade clothing and more.

The line on the 8th Avenue side of the block for the #hamilton in person lottery. #ham4ham @dnainfonyc

Two actresses behind "The Hamilcast" podcast grew up in Whitestone, Queens. After a decade of being out of touch, they reconnected through their love of "Hamilton" via Facebook, after Bianca Soto, one-half of the team, announced she had won the in-person lottery last year in a status update.

Gillian Pensavalle saw and commented. She had heard music from the show that same week and immediately became a fan. By January 2016 the two launched The Hamilcast, which they billed as "An American Podcast About an American Musical About a Bastard Orphan."

So far there have been 20 episodes, some of which feature fellow fans, like a Manhattanite who makes "Hamilton" cards as well as interviews with production crew members who work on "Hamilton."

"Talking to ['Hamilton' music producer] Scott Wasserman really, really flipped us out. He has been involved in Hamilton since 2012 and he was so generous with his time and knowledge," Pensavalle said.

Soto was surprised by how easy it's been to get hold of guests who are directly involved with the musical, since the podcast was initially intended to be a place to discuss Hamilton's biography.

"We never really anticipated people wanting to be interviewed or be a part of the podcast as guests so by reading the book we knew we'd always have something to discuss each episode and have fun finding the connections to the show and cast recording," said Soto in an email.

Since its launch, the Hamilcast duo has drank over 100 Sam Adams beers, listened to the cast recording over 1,200 times, and tried, unsuccessfully, to win the ticket lottery more than 300 times.

Some people turned to Twitter as an outlet for their "Hamilton" obsession. Some feeds are exclusively about not being able to win a lottery ticket at the theater, like the Ham4HamLottery account. Most of its tweets are re-tweets from people who stood on the winding lottery line and didn't win the lottery.

Another Twitter account, ForHamiltonTix is based on all the things the account holder would do for "Hamilton" tickets including dying, just so that they can attend "Hamilton" unseen, as a ghost.

Fans of "Hamilton" have raved about the music, how catchy so many of the songs are, and the wide range of genres found in the show.

The music has inspired a Hamilton Sing Along group that was founded on the NYC Meetup website. Their next meeting is set to be held on July 8th, with a $20 cover. The location will be announced to those who opt in.

Kiki Dolan, 26, who lives in the West Village decided to start the store after seeing the show in October.

Dolan figures that she has entered the lottery "enough to make a shirt about it." She's surprised by the response and how many people like the shirt.

"Within my first week 'live' I had orders and 'favorites' coming through almost every day," said Dolan in an email. "I think it's just a shirt people can really relate to here." 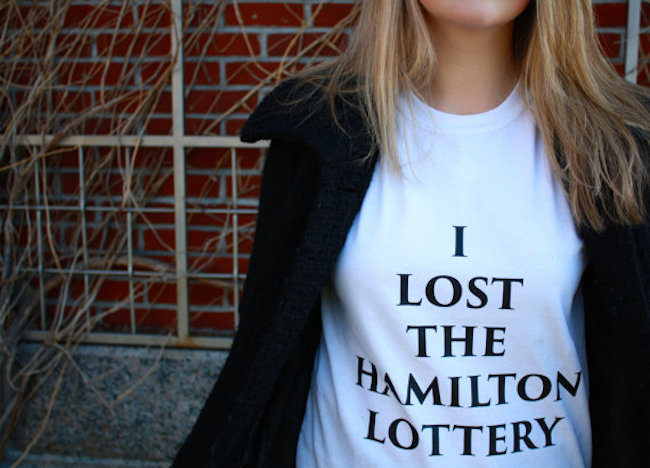 She plans on making more Hamilton merchandise this summer and figures the play will keep her inspired for a while to come.

"I fell in love with the music: the lyrics, rhythms, and intricate melody ties between different soundtracks all seamlessly connect the entire story together in a way that I've never seen before," she said.