GOWANUS — A newly built high-rise on the banks of the polluted Gowanus Canal is filling up fast, with more than 100 apartments rented within two months, the building's developer announced Tuesday.

"We are proud to have had the vision and foresight to have developed the first residential development on the Gowanus Canal Waterfront," Lightstone president Mitchell Hochberg said in a press release. "Our immediate success affirms that Gowanus is the hottest new neighborhood in New York City."

365 Bond St. was built on a former industrial site that underwent an extensive cleanup before renters moved in. Tenants aren't allowed to grow vegetable gardens there to protect them from possible exposure to toxins that remain in the soil, and inspectors will regularly check the property's air quality.

There are 430 apartments at 365 Bond St., of which 86 are set aside for lower-income tenants. More than 56,000 people applied for the lottery that doled out the affordable units.

Lightstone's spokesman did not respond to an inquiry about how many of the apartments that have been rented so far are affordable units. 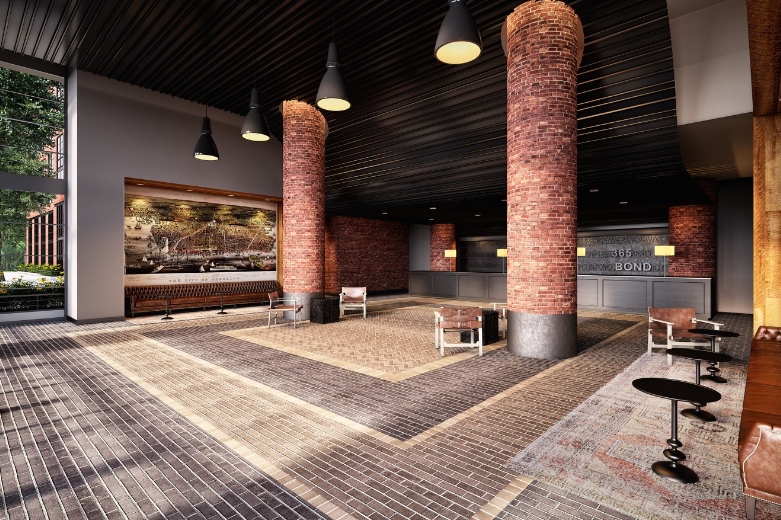 The lobby at 365 Bond St. Photo by Lightstone.

The building was completed earlier this year and sits next to the manmade Gowanus Canal, one of the dirtiest waterways in the country, according to the U.S. Environmental Protection Agency.

The canal, which is laced with toxic chemicals from decades of industrial activity, will be cleaned up under the EPA's Superfund program. The EPA expects to start dredging toxic sludge out of the canal starting in 2018 or 2019, an EPA spokesman told DNAinfo New York in April.

365 Bond St. boasts luxury amenities including a 24-hour "doorman concierge" and a valet service that takes care of tenants' dry cleaning, dog walking, and other needs.

The building also has 30,000 square feet of outdoor space, including a waterfront park with public seating and “a long esplanade, fishing, and boat access, offering an amenity for both 365 Bond residents and neighboring communities to enjoy,” Lightstone said Tuesday.

The New York State Department of Health advises against eating fish caught from the canal, especially women under 50 and children under 15. The DOH says kayaking, canoeing and catch-and-release fishing on the canal "are not expected to harm people's health."