PARK SLOPE — They've got the tools for success.

Opened by Joe Leopoldi at 415 Fifth Ave. in 1966, the shop is now run by his three sons and widow with occasional help from Joe's grandchildren. It has the same squeaky floors, creaky ceiling fans and matchbox-sized wooden drawers for holding small screws that it did when the family started the store. 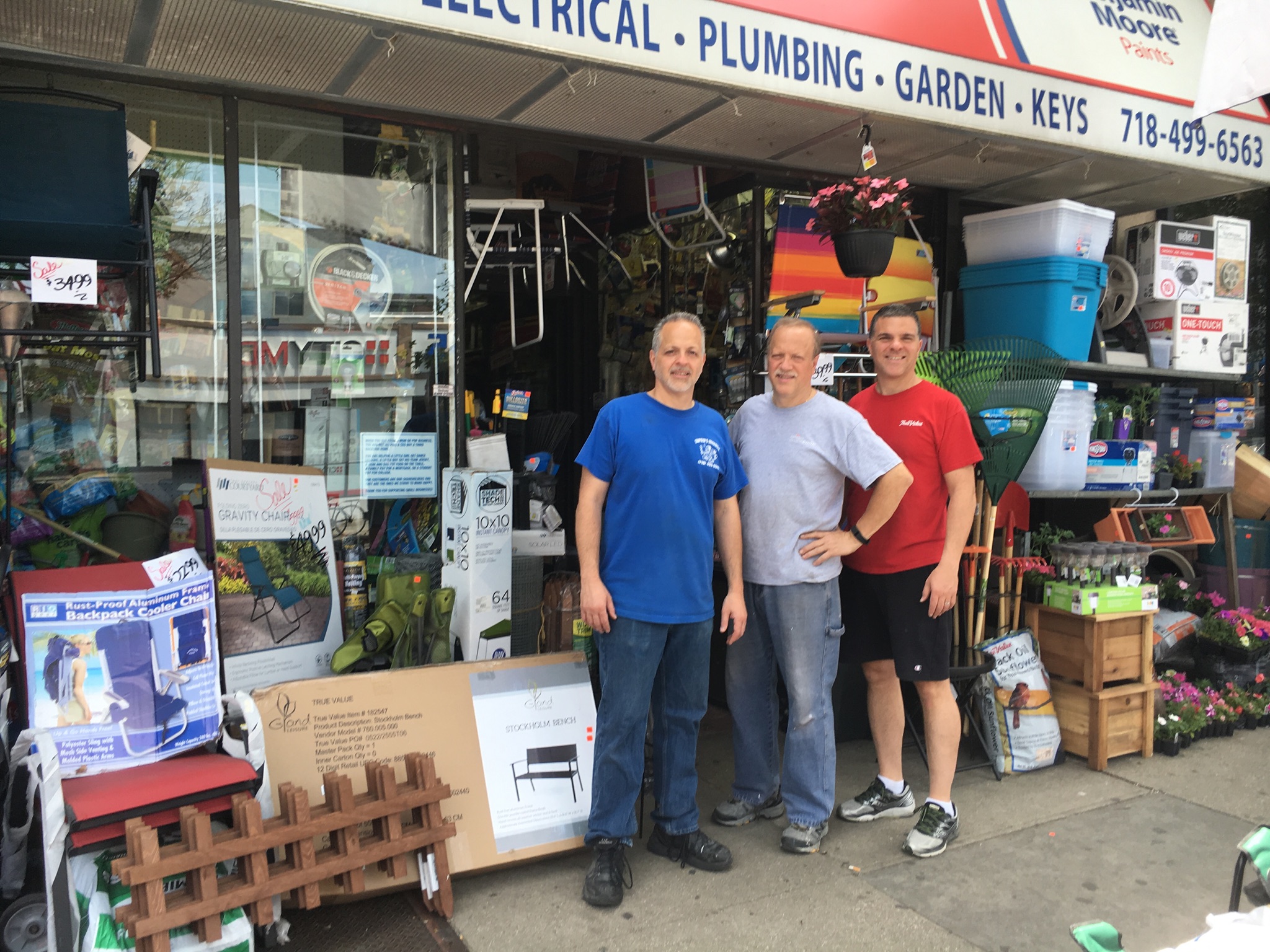 Peter,  Joe and Rob Leopoldi outside Leopoldi's, the hardware store their father opened in 1966. Today the brothers work at the store and so does their mom, Flo.

Other constants have endured too, with slight tweaks, said Rob Leopoldi, who started working in the store with his brothers as a pre-teen and still runs the paint department. Toilet flappers — the rubber valve at the bottom of a toilet tank — are perennial big sellers, but in the old days the store stocked just one type, and now there are 20 different kinds, he said. Decades ago, customers had exactly 12 Benjamin Moore paint colors to choose from. Now any hue in the rainbow can be custom mixed on the spot.

Inventory at Leopoldi's is now crammed into every available nook, spilling out onto the sidewalk.

“People say, ‘You have everything, what don’t you have?’ I say, ‘We don’t have room to walk,’” Rob Leopoldi joked.

The store weathered the economic crisis of the 1970s, and the arrival of Home Depot in the 1990s. The Leopoldis were so worried about the big-box rival that they reversed a longstanding family policy and opened the store on Sundays. Their fears didn't materialize — customers seem to prefer Leopoldi's smaller-scale charms, and business is better than ever, Rob Leopoldi said. 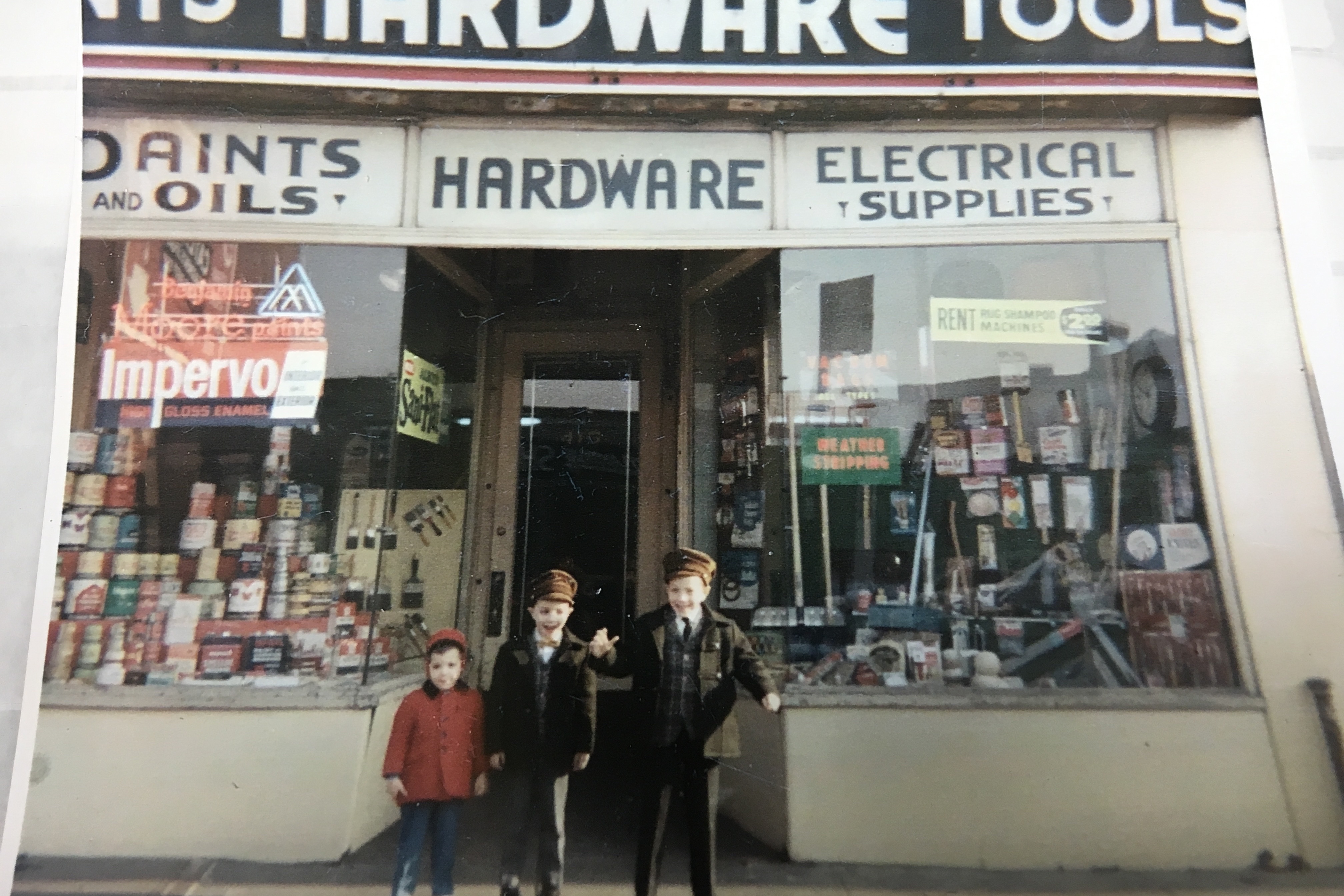 Peter, Tom (now deceased) and the younger Joe Leopoldi outside the store in the 1960s.

"Not to boast or anything, but customer service was instilled in us when we were young," Rob Leopoldi said. "It's important to treat people right and have what they need. Every little sale counts. People will spend 10 minutes and buy five screws, but they'll come back."

Rob Leopoldi said he and his siblings learned their work ethic from their dad, the grandson of Italian immigrants, who grew up in Park Slope. As a youngster Joe Leopoldi worked as a shoeshine boy on Fifth Avenue and did grocery deliveries. After serving in the U.S. Air Force for a few years, he returned to Park Slope and opened The Place, a luncheonette at 363 Sixth Ave. (on the corner of Fifth Street) that was famous for its egg creams, Rob Leopoldi remembers. 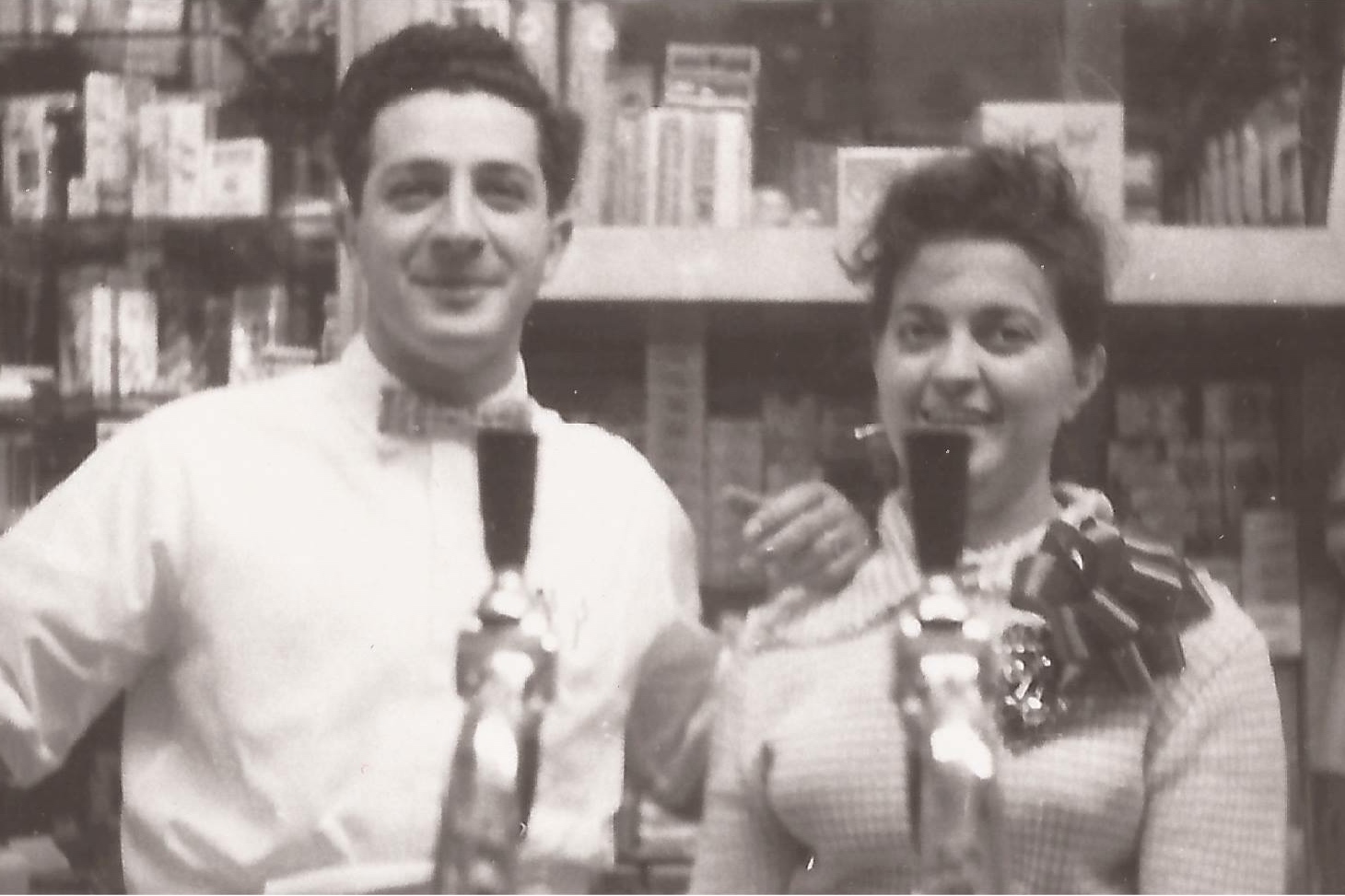 Joe Leopoldi married Florence in 1959 and the couple had five children who all attended St. Saviour Catholic Academy on Eighth Avenue. Joe was "strong, independent and entrepreneurial," said Rob, and he saw an opportunity when Fazio Hardware went up for sale in 1966. 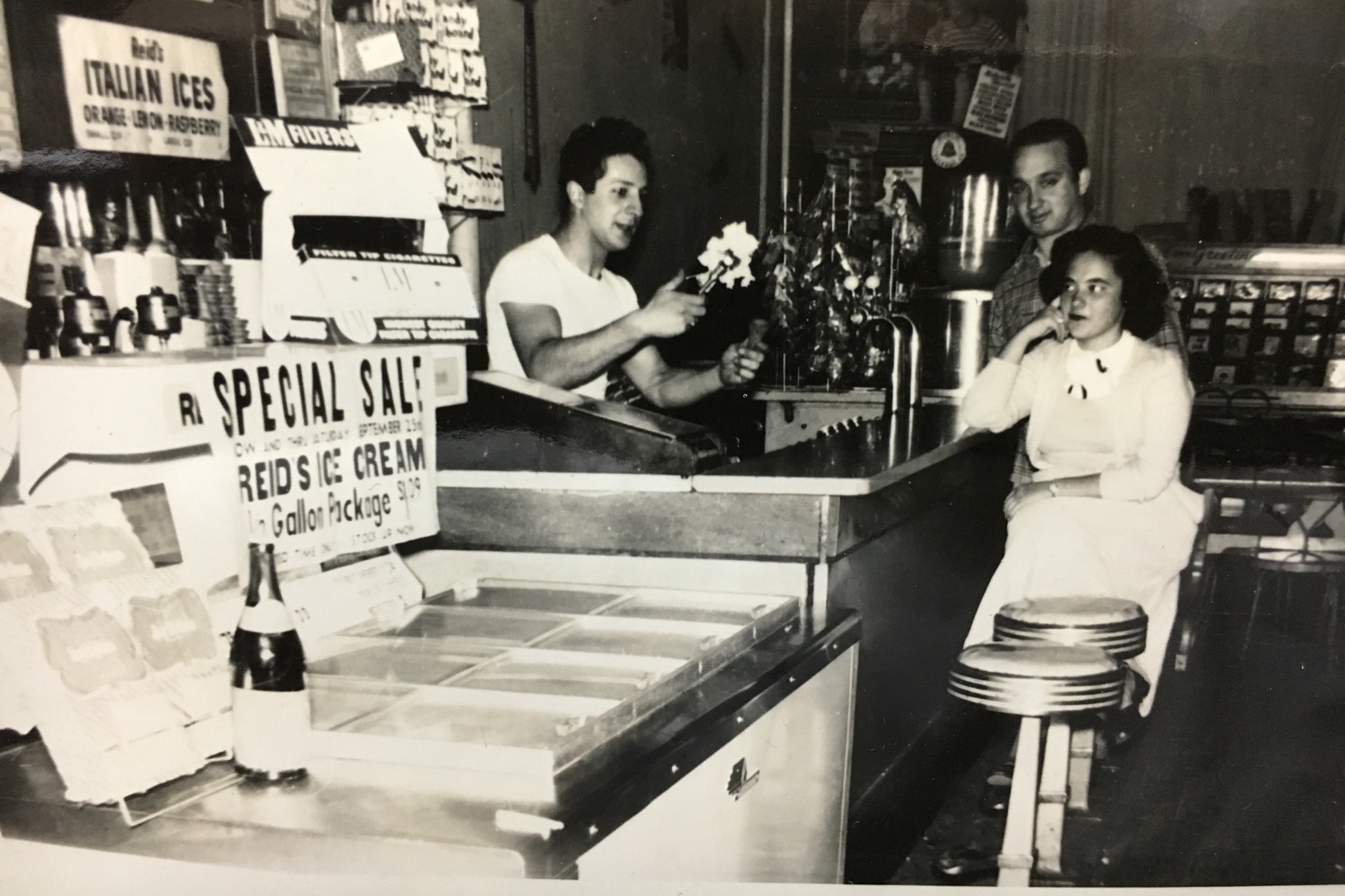 Joe Leopoldi, left, scoops ice cream at The Place luncheonette on Sixth Avenue and Fifth Street in Park Slope in the 1950s or '60s while his wife Florence watches.

Rob Leopoldi remembers the Park Slope of his youth as a much sleepier neighborhood, and the pace at the store then was more leisurely. Today, with the neighborhood's population growing, especially with the arrival of new high-rises on Fourth Avenue, Leopoldi's Hardware is thriving, he said.

“In this neighborhood there are just more and more people," Rob Leopoldi said. "They’re putting up more buildings and it means more customers. Because we know the neighborhood and we treat people right, people come back.”

Joe Leopoldi died in 1989 and Rob Leopoldi now runs the store with his mom, Flo, and two brothers, Pete and Joe. On Saturday they cut a cake and posed with a proclamation from Mayor Bill de Blasio declaring June 4 "Leopoldi Hardware Day." 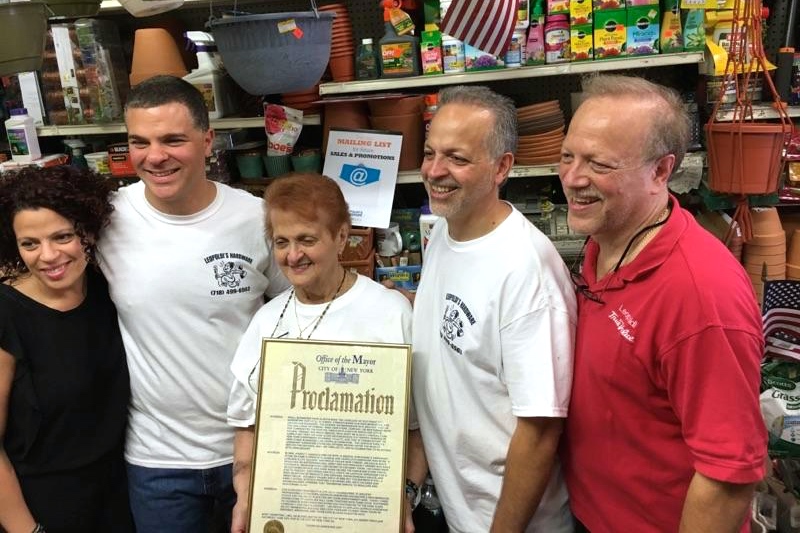 What would the elder Joe Leopoldi think of the half-century celebration? "He was a strict father and all that, he made sure we knew about right and wrong," said Rob Leopoldi. "But he was definitely a person who celebrated things. Whenever there was a party he would be the one dancing. He would tap dance on the kitchen floor. He would be outside raising a glass and toasting [if he were here now]. He’d be very happy."