PARK SLOPE — A neighborhood boutique is smashing the patriarchy while smashing sales records.

A T-shirt emblazoned with the word "Feminist" in gold foil letters is flying off the shelves at Diana Kane women's shop on Fifth Avenue and President Street, with shoppers snapping up more than 500 since December.

"That's a lot of units for my store, especially in the winter," said owner Diana Kane, who designed the shirt herself. "The response was instantly enthusiastic."

The topical top has touched a nerve at a time when the possibility of the country's first female president looms and some high-profile women have rejected feminism while others have embraced it.

Kane's shirt now has its own hashtag — #feministgold — and celebrities including late night TV host Samantha Bee and actress Sissy Spacek have been photographed wearing it. Supermodel Christy Turlington was spotted wearing one in a yoga class, Kane said, and actress Connie Britton of "Friday Night Lights" and "Nashville" offered the shirt as a prize for winners of a feminism-themed video contest.

Kane's boutique opened 14 years ago and is a go-to spot for Park Slope women looking for understated but on-trend fashions. The shop offers jewelry handmade by Kane as well as a curated selection of clothes by sustainable, small-scale designers. Prices run well over $100 on many pieces.

The no frills Feminist T-shirt is probably the store's biggest selling item ever, Kane said.

Kane, 43, created the shirt after she went searching for a garment with a feminist theme and couldn't find any that suited her style, which she described as leaning toward neutrals with a dash of bling. There's a popular shirt that declares "The Future is Female," but Kane said she didn't feel comfortable wearing that slogan as the mother of two boys.

Kane said she was inspired to make her own feminist T-shirt in part by the Black Lives Matter movement and the writings of feminist author Roxane Gay.

"I found it disturbing that it's still such an issue," Kane said of women's equality. "When you discover that 83 percent of Congress is male [the current figure is 80 percent], you realize that the representation is still so unequal. It felt like it was important to me to put my values on my chest."

Kane's shirt comes in women's and unisex sizes and is available for adults in a $35 short-sleeve version and a $60 long-sleeve version. The shirt has sold well across the age spectrum, Kane said, appealing to both seasoned bra burners and tweens. The $25 children's version (in 100 percent organic cotton) is a hit with little women's libbers at Park Slope's M.S. 51, Kane said. 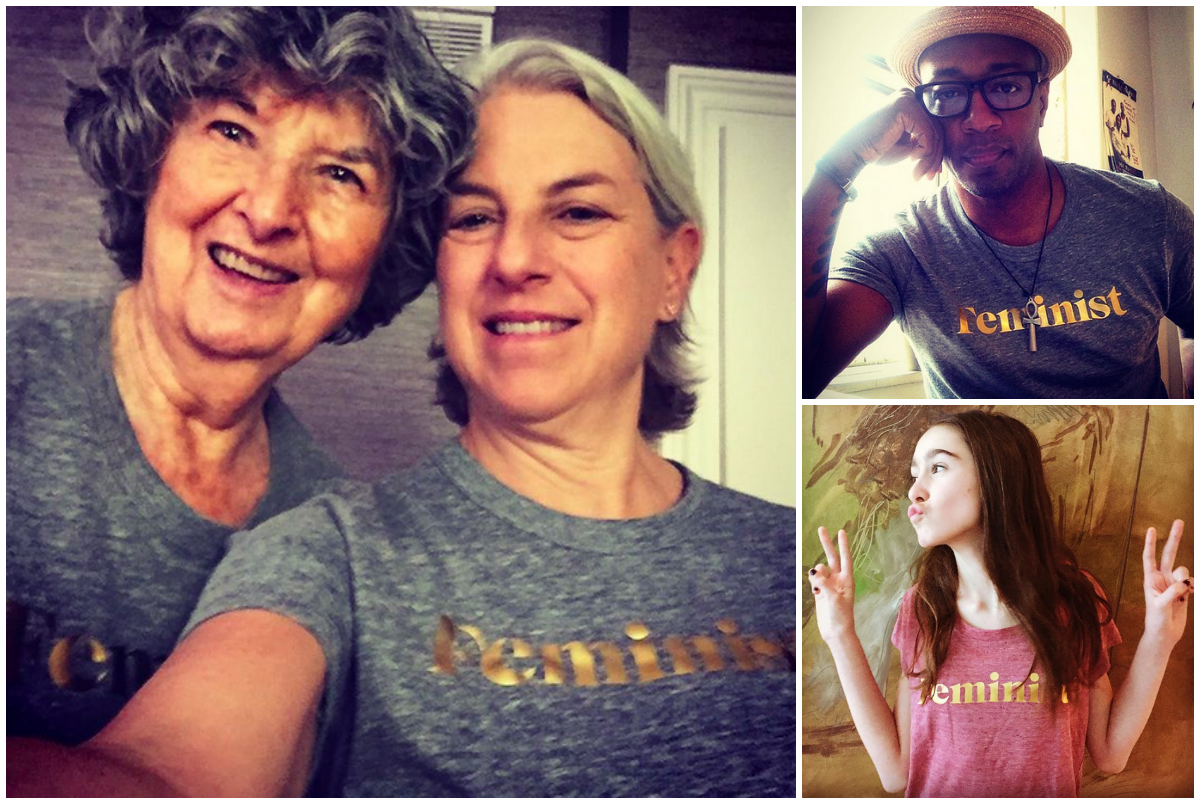 "I think it's sort of the bat mitzvah gift of the season," Kane said.

Both of Kane's young sons own the shirt, and Kane described hearing her 8-year-old boy describe what feminism is to another kid as "one of the high points of my parenting life."

This past Sunday, Kane unveiled a tank top version for the summer and is working on getting a baby onesie in the store, but has been slowed because she wanted to find a vendor that makes one in 100 percent organic cotton.

Earlier this month Kane added a charity component to the shirt sales and started donating a portion of proceeds to the Brooklyn-based nonprofit Girls for Gender Equity.

Kane said she's heard only a smattering of negative responses to the shirt.

"Every now and then people come in and they’re like, 'I would never wear that,'" Kane said with a chuckle. "I just let it go by. The response from men is a little mixed. Some of them are like 'Hell yeah, I’m a feminist!' and others are like, 'But what about us?'"