MANHATTAN — Metro-North service was running on a limited schedule to and from Grand Central Terminal on Wednesday the morning after a fire broke out under the tracks in East Harlem, according to officials.

Metro- North Restores Limited Service into and Out of Grand Central. Saturday Schedule in Effect Wed. May 18. See https://t.co/OBa4yu1izk .

The blaze started at West 119th Street and Park Avenue at about 6:42 p.m. after construction debris and a trailer caught fire beneath the elevated tracks on the Park Avenue Viaduct, an FDNY spokesman said.

The fire caused major delays on Metro-North trains, stranding commuters who packed into into Grand Central.

No trains in or out of. Grand Central due to a fire at 118th street. Indefinite delays.

MTA crews worked through the night to mend two of the four damaged tracks on the viaduct, officials said.

As of Wednesday morning, crews were still making repairs to two tracks, but trains could pass on either side of the damaged areas at a reduced maximum speed of 30 miles per hour, the MTA said.

The MTA advised riders to listen to announcements at their stations for further updates.

The agency was also cross-honoring subway tickets for commuters.

The fire was knocked down by 9 p.m. Tuesday, but an FDNY spokesman said firefighters were working to make sure no construction debris was still smoldering. 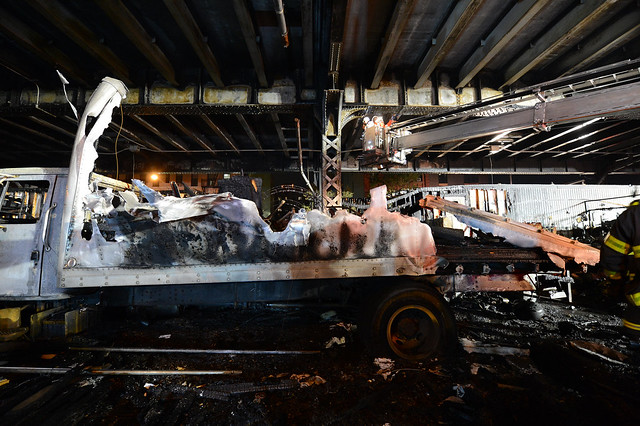 There were no injuries reported in the fire, the FDNY added.

Commuters can also check the MTA's website for service updates.

At the scene of the 118th St. fire tonight in NYC affecting the @mtametronorth. Please check www.mta.info for notices of delays.