BROOKLYN — In an effort to tamp down the high stress of the middle school admissions process in District 15 — which spans from Carroll Gardens and Red Hook to Park Slope and Sunset Park — the local superintendent last week announced a shift to a “blind” ranking system.

That means that students’ order of preference would be unknown to the schools they apply to. Under the current setup the most sought-after schools often won’t consider a student who doesn’t rank them first or second, which many parents say leads to high anxiety on how to game the system.

“We are making positive steps toward a more inclusive, equitable and family-friendly middle school admissions process for all of the District 15 community," District 15 Superintendent Anita Skop wrote in the May 11 letter first reported in Chalkbeat. “Based on community feedback and the support of the middle school principals in the district, we are making this change to support District 15 families."

But the shift failed to address the bigger issues a grassroots group called Parents for Middle School Equity has spent the past few years working on: how to change the district's middle school admissions process so it results in more integrated schools.

“The tweak to decrease some of the stress level around middle school admissions through blind ranking will be a small improvement for middle class parents,” said Amelia Costigan, a Windsor Terrace mom of seventh-grade twins, who co-founded the Equity group. “We don’t see it as any improvement for closing the opportunity gap.”

Seventy-six percent of District 15’s white students are concentrated in just three schools — the popular M.S. 51, M.S. 447 and New Voices, according to an analysis from Parents for Middle School Equity.

The altered application process will still favor families who have greater flexibility in their schedules and can afford to spend time taking off from work or paying for additional child care as they visit schools, parents from the Equity group said.

It will remain a highly competitive, time-consuming process that results in a highly segregated district (and will need to be repeated just a few years later for high school).

“It is surprising that Ms. Skop would use words like ‘inclusive’ and ‘equitable’ for changes which continue to support an admissions process that is anything but,” Costigan said. “Choice continues to competitively sort our children and is a factor that contributes to our district's shameful segregation.”

But there are great disparities at the schools. 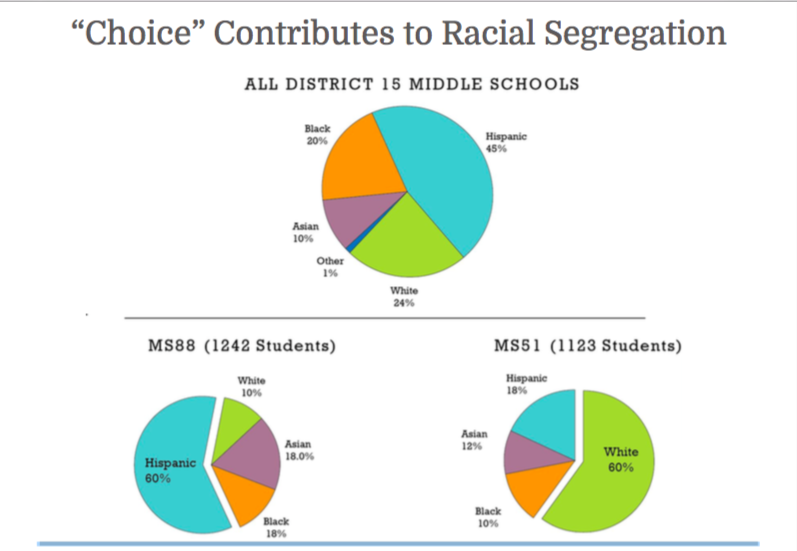 “The schools right now sort the children. It doesn’t lead to balanced and diverse schools,” said Reyhan Mehran, a mother of three in Carroll Gardens and part of the Equity group. "It leads to schools that are very different from each other and different from the district overall.”

She wondered how the change would really work given it doesn’t seem to reduce the time that parents will need to put into the admissions process and will likely burden already over-taxed schools that will now need to take even more time sorting through applications.

Her group has been calling on Skop and the local Community Education Council since November to work with it on hosting a “learning lab” — a workshop where families discuss the needs of their schools and communities.

Skop did not respond to questions about hosting such an event, but said, in a statement: "My office is in ongoing discussion with principals and parent leaders around ensuring this process best serves the students and families of District 15, and I look forward to the conversations ahead."

District 15's move echoes changes being debated in Manhattan's District 2 — which includes TriBeCa, Greenwich Village, Chelsea and the Upper East Side — where families have also been pushing for ways to change its current choice-based middle school admission process.