LOWER MANHATTAN — Hundreds gathered outside of City Hall Thursday, rallying in support of long-delayed police reform bills that would require officers to get consent before searching someone without a warrant.

The Right to Know Act — City Council legislation composed of two bills — would require the NYPD to identify themselves and explain why they are stopping or questioning an individual. Police would also have to explain that people can deny consent to a search in certain instances — and get written or audio proof of consent to a non-warrant search.

The act was introduced in Nov. 2014, and has gone through an oversight hearing, but still has not been voted on by the entire City Council. On Thursday, those gathered called on the City Council to vote and pass the long-stalled legislation.

Many at the rally said they wanted the police reform acts to move forward, to help protect New Yorkers from potentially abusive encounters with police. 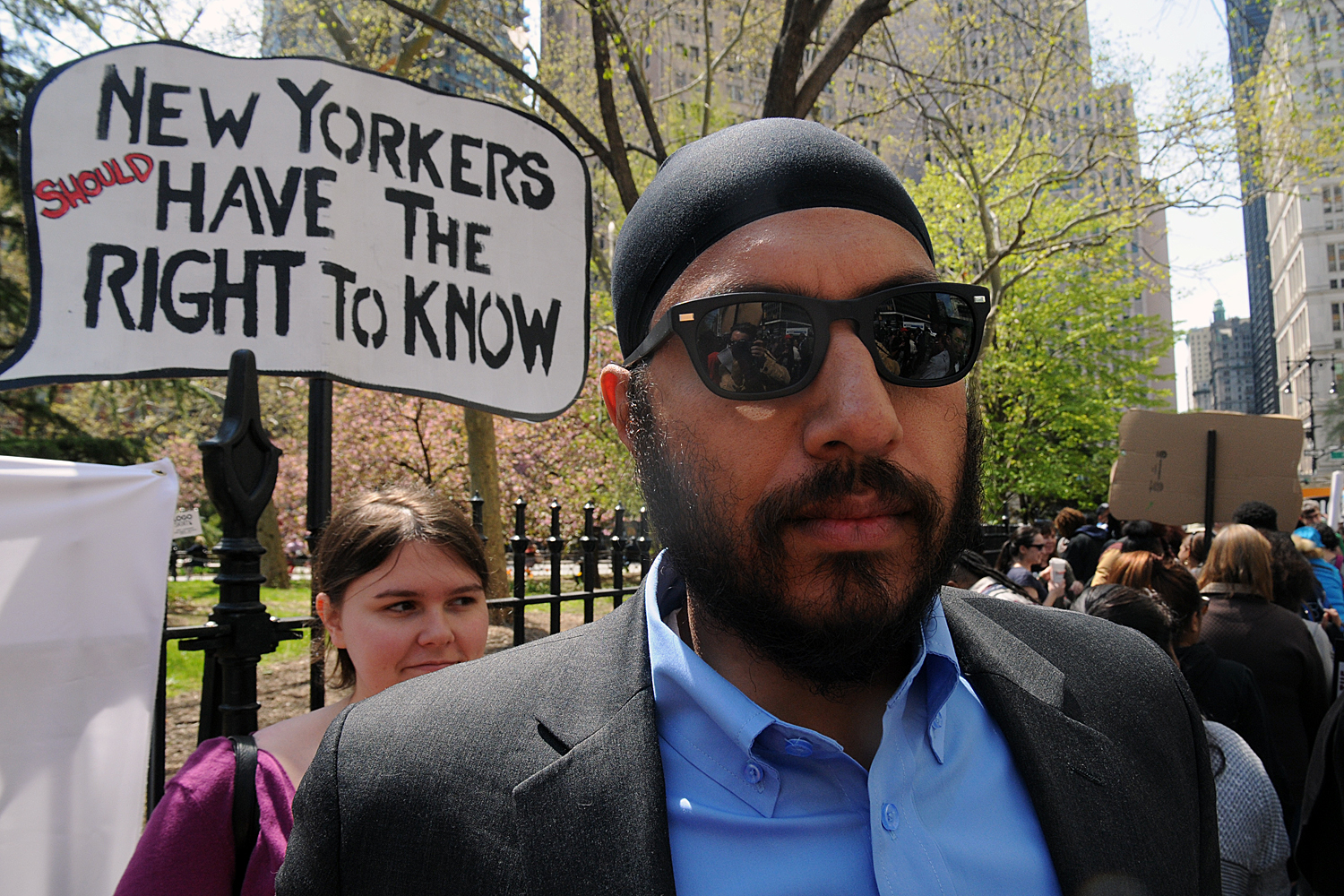 Sandeep Kandhari, Director of the Community Justice Unit with the Legal Aid Society came out in support of the Right to Know Act. (DNAinfo/Ben Fractenberg)

“For too long, especially in neighborhoods of color, people stopped by police are never given a reason why,”  said Sandeep Kandhari, director of the Community Justice Unit with the Legal Aid Society at the rally Thursday.

Part of the idea behind the bill is to counterbalance what has been called discrimination against black and Latino men when it comes to stop-and-frisk searches.

Abraham Velazquez, 32, from The Bronx, said at the rally that he'd been harassed several times by police in his neighborhood, including being stopped and searched for no reason and being given summonses for when he hadn’t committed a crime.

"Sadly, it’s is a very common story for many young people in New York City,” said Velazquez, a member of the Peace Poet group, and a performer at the rally. “You come to feel like you’re a predator in your own home — It’s completely disrespectful for working class people.”

The rally was organized by Communities United for Police Reform, and had the support of several advocacy and legal groups, including the New York Civil Liberties Union.

"Communities have been forced to wait far too long for action on the Right to Know Act police reforms and in the meantime New Yorkers continue to experience abusive policing encounters and unlawful searches," Councilman Richie Torres, a sponsor of the act, said in a statement. "Now is the time for these bills to be passed by the Council."

Both Mayor de Blasio and Police Commissioner William Bratton have said that they don't support the bills.

Bratton previously called the Right to Know bill and other council oversight of the NYPD an "unprecedented intrusion" and warned that it could hamper the department's ability to do its job.

It remains unclear when the bills will be voted on in the City Council.