No one was injured in the collapse, which happened about 10:30 a.m. when strong winds toppled wood framing atop 535 Fourth Ave., where an 11-story building is going up.

Department of Buildings inspectors have issued more than a dozen "class one" safety violations at the site — meaning that conditions posed an immediate hazard — in the past two years, according to DOB records.

On March 1, inspectors ordered work to stop on part of the site because construction activity did not conform to building plans submitted to the DOB, according to inspection records.

"We're all just lucky no one was hurt," said Aaron Brashear, founder of Concerned Citizens of Greenwood Heights. "It could have been disastrous."

A DOB spokesman said the partial stop work order was issued after an inspector discovered that "concrete work to erect columns was not compliant." The inspector found that six columns at the site were "out of plumbness," meaning they weren't completely vertical, the spokesman said. The local blog One More Folded Sunset first reported the violation history.

"We immediately responded and have been incessantly working with New York City’s Department of Buildings, fire and police departments," said David Schwartz, co-founder and principal of the building's developer, Slate Property Group, in an emailed statement.

“There were no injuries and, to ensure proper safety, we have stopped all work at the development. We will continue to work with the city to bring 535 Fourth Ave. back to a safe construction site."

The incident shook up locals who've been living in the middle of a construction boom along Fourth Avenue between Park Slope and Gowanus, where more than a dozen high-rises are in the works.

On Fourth Avenue and 15th Street, where 535 Fourth Ave. is under construction, plans are underway for new buildings on three of the four corners. On the fourth corner, a new building was completed in 2013. 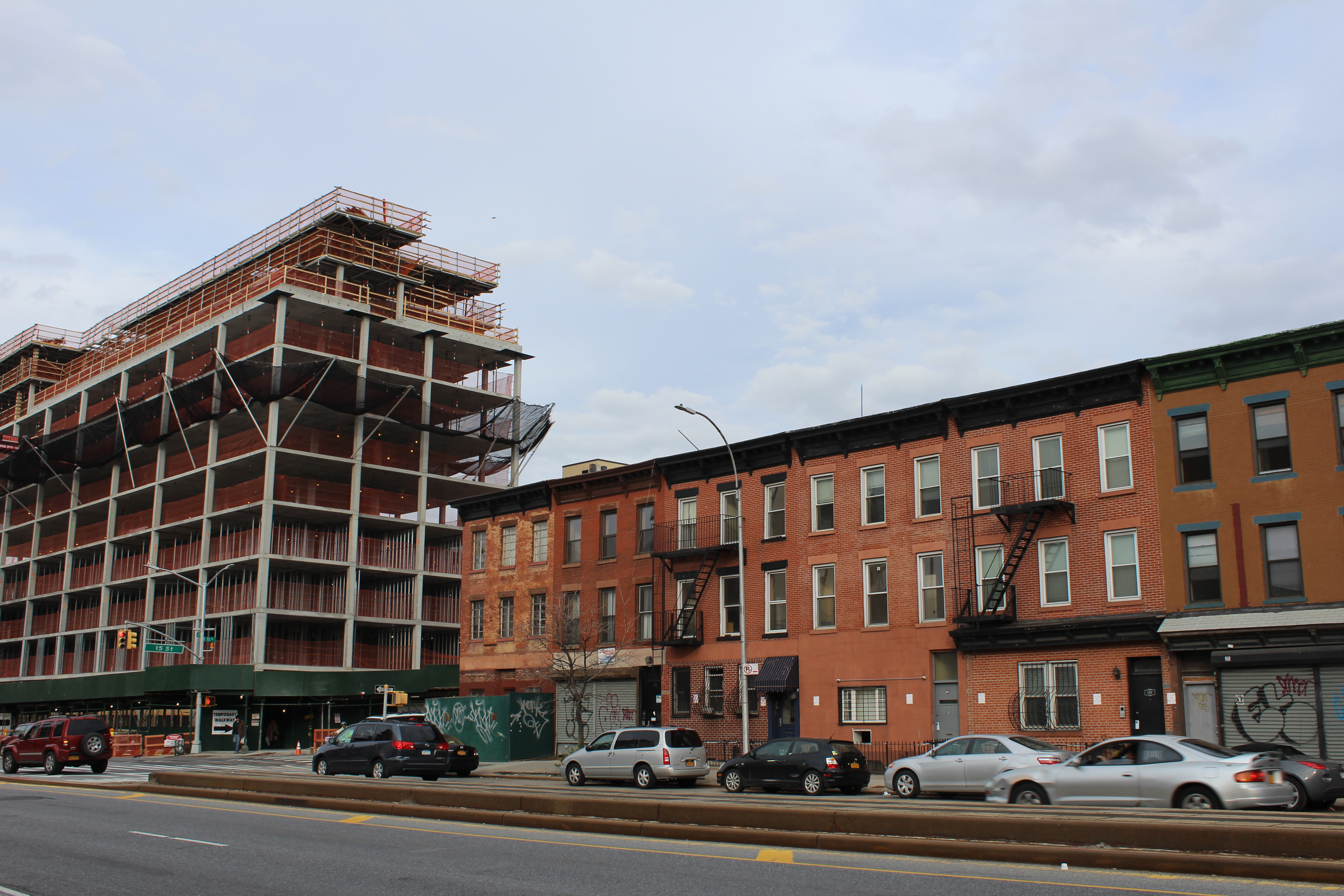 At left, 535 Fourth Ave. on March 31, 2016, three days before wood framing on the roof collapsed during high winds. At right are several buildings slated to be demolished to make way for an 125-unit building at 541 Fourth Ave.

"There's too much of it going up too quickly," said Hilary Neidhart, who lives on Fourth Avenue between 16th Street and Prospect Avenue. She noted that with real estate experts predicting a glut of luxury units, developers seem to be moving at warp speed to finish projects.

"I think maybe they’re running out of people that can afford the zillion dollar places," Neidhart said.

"It feels like everyone is trying to beat the clock. When you hurry, mistakes can happen. That was just a gusty day — what happens when we have another hurricane?"

The 141 rental apartments at 535 Fourth Ave. are being built by developers Slate Property Group and Adam America Real Estate.

Slate and Adam America also partnered to build 251 First St. (also known as 275 Fourth Ave.), which made headlines recently for its plans to offer a "stroller valet" service for residents.

Correction: A previous version of this story referred to 535 Fourth Ave. as a condo building. The building, now under construction, will be rental apartments, not condominiums.