Meet The 'Bed Stuy Kitty Crew,' The Cat-Catching Couple Who Trap and Neuter

BEDFORD-STUYVESANT — When Jill Riker and Jason Corso moved into their Bedford-Stuyvesant building, they were greeted by a cacophony of kitten mews.

The couple dug under fences in their backyard to find a litter about three weeks old. They bottle fed the tiny cats and found them new homes.

Now their Chauncey Street apartment is home to nine cats, many of which they’ve picked up after they started working to help strays by trapping, neutering and returning (TNR) throughout Brooklyn.

“Any stray cats that we find — some of them are feral cats, some are just cats that people throw out — we get them neutered and spayed, and then we send them back out,” said Riker, 35, who has more than 15 years of experience in animal rescue.

Riker and Corso dubbed themselves the Bed Stuy Kitty Crew after moving to the neighborhood from Ridgewood three years ago.

“I had never really seen the need in Ridgewood," Corso, 36, said.

"You would see the occasional cat, but when we came here, they were just everywhere."

Since then, the pair frequent three Bed-Stuy spaces daily, feeding up to 15 cats in one spot.

They pay mostly out of their own pocket to get the animals fixed and fed, often doing mass trappings every six months and individual TNRs when needed.

Daily grub can cost $5 and, over the last three years, veterinary bills and neutering costs have totaled an estimated $2,000, according to Corso.

“The majority of them are feral, but it’s very difficult to place them,” he added. “We release them to where we found them where they’re used to their habitat, and after we get them fixed we’re back feeding them, that way they’re not abandoned.”

Bed-Stuy Kitty Crew is one of several groups including Bedford Corners Community Cats that TNR throughout Brooklyn, where hundreds of cat colonies abound, according to the couple. 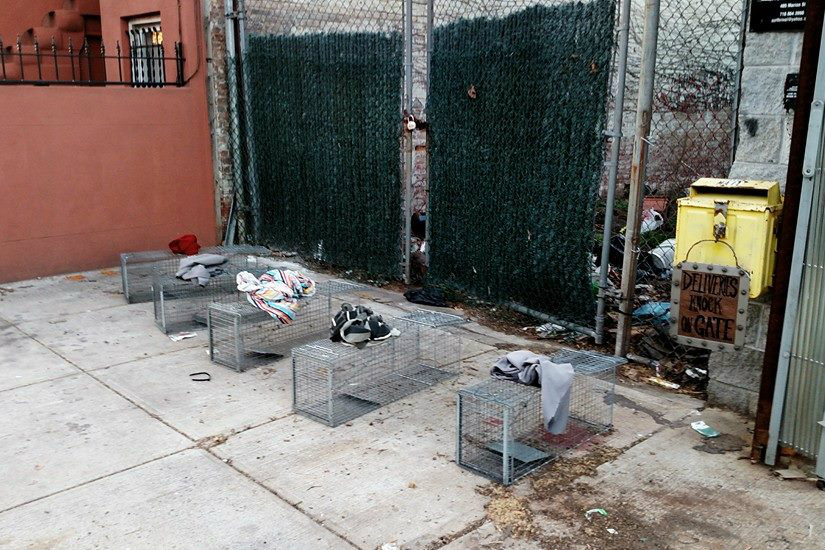 Through the process, the cats are prevented from reproducing, many that are ill can receive necessary care and the more domesticated ones, which Corso calls “friendlies,” are able to find a new home.

“We send them back out unless they’re really loving and we don’t have the heart,” Corso said, adding that at one point they had 12 cats living with them.

Pet owners need to have their animals fixed, he stressed, because many cats end up getting “dumped” when their owners move, or can get out and get pregnant.

The Brooklyn couple has their own traps, but rent more for larger colonies.

Cats are lured into the metal cages with a trail of sardine juice or food and are taken to clinics at the ASPCA or local vets to be spayed or neutered at either no cost, or as little as $5.

Riker estimates that they’ve TNR’d about 80 cats over the last three years.

Passersby who recognize the couple during their feedings often ask for help to get cats in their neighboring lots fixed, they said.

But not everyone appreciates the work they do.

In addition to their home being a safe haven for strays, including friendlies like Isosceles, Lex, and Pandora, there are at least a dozen that frequent the backyard in shelters Riker and Corso have built from Styrofoam coolers, Ikea shelves, insulation and straw.

Riker makes her own meals for the cats they keep indoors, creating mixes of pre-ground chicken, turkey, rabbit or duck, with vitamins. Since she’s a vegan, creating the food from scratch is a sacrifice she said she’s willing to make to give them healthier options.

The couple has climbed onto neighboring fire escapes, over fences, and crafted ways to throw food onto roofs where they’ve seen the animals in need of help, they said.

While they’re sure to hit their neighborhood locations each day, they also keep cat food in their car and bags to feed strays on their way home or to work — which often leads to being followed by friendlies down the blocks, Riker said.

Aside from the emotional attachment that comes with it, the most difficult part isn’t the trapping, or coaxing, it’s the naming, they said. With each visit to the vet or ASPCA, every cat needs to be named. 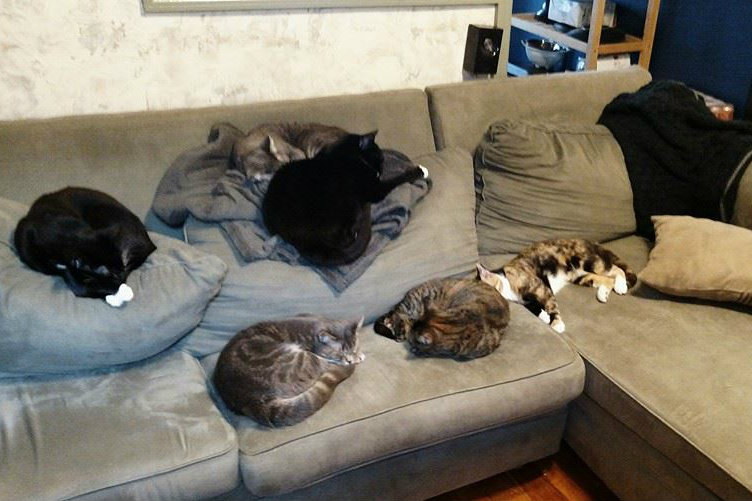 Riker and Corso have gone through dozens of lists, checking off from inventories of Greek goddesses, constellations, movie characters and more.

“That’s probably the hardest part out of everything,” Corso said. “You want to give them a good name, not like Fluffy, or Mitsy, or Bootsy.”

Those who are interested can get TNR certified through free workshops, he added.

“Get your cat spayed or neutered, whether it’s an outdoor cat, find a way to do it, and definitely if it’s your own pet, because that’s where it stems from,” he said. “And there’s other options other than dumping your cat out on the street.”

The Bed Stuy Kitty Crew’s neighborhood work has prompted other locals to start feeding as well, the couple said, though the practice of tending to area cats isn’t anything new.

“It’s just very sad, but at the same time it’s very rewarding. You do get a good feeling when you walk up the block and the cats see you and they start running towards you,” Riker said. “You feel like you’re doing something good for just that second.”