PARK SLOPE — A standing-room-only crowd of angry residents sparred Tuesday night with developers over plans to replace the Fifth Avenue Key Food with apartments, shops and a grocery store, slamming the project as an "insult" to Park Slope.

Developer Avery Hall Investments told the diverse audience of more than 400 at P.S. 133 that it wants to build two buildings — one six stories and the other four stories — at 120 Fifth Ave. Together they would hold 52,000 square feet of ground floor retail and 165 apartments, 41 of which would be affordable.

Locals harshly criticized the proposal during a Q & A session, lining up to grill Avery Hall's founding principal Brian Ezra about the affordability of the apartments and the size of the future grocery store.

They weren't the only ones voicing concerns. Public Advocate Letitia James, Brooklyn Borough President Eric Adams and City Councilman Brad Lander all showed up to lend their support to residents, and Comptroller Scott Stringer issued a statement shortly before the meeting calling for a "full-service affordable supermarket" at the property.

Ezra, who grew up in Park Slope, fought off boos as he told the sometimes rowdy crowd that the development would have room for just a 7,500-square-foot grocery store — a fraction of the 36,000-square-foot Key Food that's been on the property since the early 1980s.

Residents made clear that the existing Key Food — known for wide aisles, parking and lower prices compared to new stores such as Whole Foods — is an essential part of the daily routines of thousands of locals, from longtime working class residents to newer, wealthier arrivals. Whatever replaces it must match the current store's size and prices, they demanded.

Avery Hall's proposal also calls for creating a "public piazza" lined with shops where locals could sit outside at tables. To do this, the developer would reopen Butler Street between Gregory Place and Fifth Avenue, which was closed off when the property was developed in the 1980s. 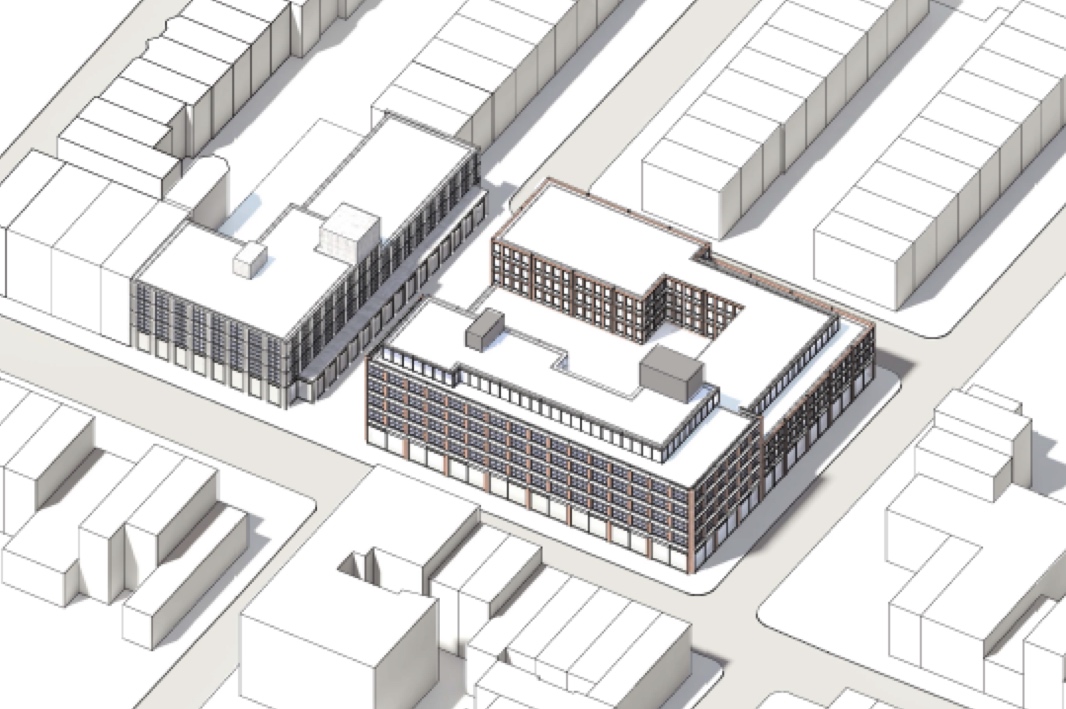 A drawing of how Avery Hall Investments proposes to develop 120 Fifth Ave. In this image Fifth Avenue is on the left.

Ezra told the crowd that his company wanted the development's retail component to "be vibrant and diverse and a place that people in Park Slope want to come to — that's very important to us."

A livid local shot back from the audience, "We already have that."

Resident William Frazier drew thunderous applause when he told Ezra, “You’ve given us a lot of fluff, aesthetics. I cannot accept less than the equal replacement of square footage that we have now. Anything less than that would be an insult. … We don’t need aesthetics, we do need to improve our community.” 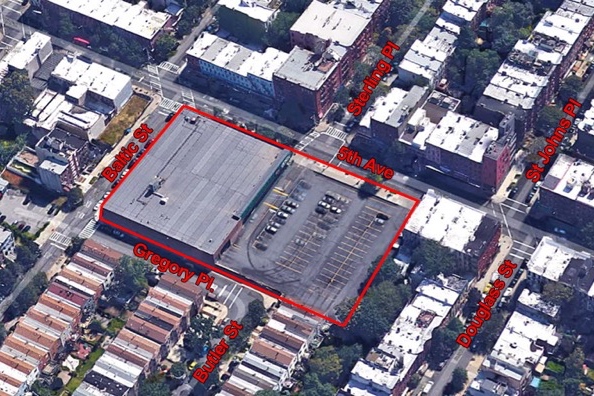 An aerial view of the existing site at 120 Fifth Ave.

Ezra said he and his partners came to Tuesday's meeting to listen to community concerns, and he left with an earful.

"We're going to go back, we’re going to think long and hard and do everything we can to improve the project as best as possible," Ezra told the crowd.

The outcry isn't just hot air. While Avery Hall can develop the property "as of right," without Planning Commission approval, the site is controlled by an urban renewal plan that was created after years of organizing by locals. Modifications to the plan must be approved by the Department of Housing Preservation and Development, Lander said Tuesday.

The site's history mirrors the battles locals fought to revive Park Slope in the 1970s, when banks and insurers refused to do business in the blighted neighborhood. The property was a rubble-strewn lot until activists, some of whom went on to form the nonprofit Fifth Avenue Committee, organized to build housing and a store there.

The 1982 urban renewal plan noted that the city wanted to rehabilitate "slum and blighted areas" and describes the property as a "deteriorated area." Today it's surrounded by some of the city's most expensive housing.

"It's very difficult, unless you were here and lived through it, to really appreciate the dramatic and in some instances appalling changes that have happened in this neighborhood," said FAC board member Pat Conway.

"Believe it or not, we had to really convince New York City and HPD that this was something they should take seriously and take us up on."

► See below for the presentation by Avery Hall Investments