MANHATTAN — A "brilliant" mathematician from Prague was killed and three other people were injured when a crane toppled at a TriBeCa construction site amid high winds Friday morning, officials said.

Construction workers were trying to lower the Bay Crane Company crawler crane and secure it as 25 mph winds whipped through the area about 8:24 a.m., when it flipped over, sending its 565-foot-long arm careening onto Worth Street stretching from West Broadway to Church Street, officials said. 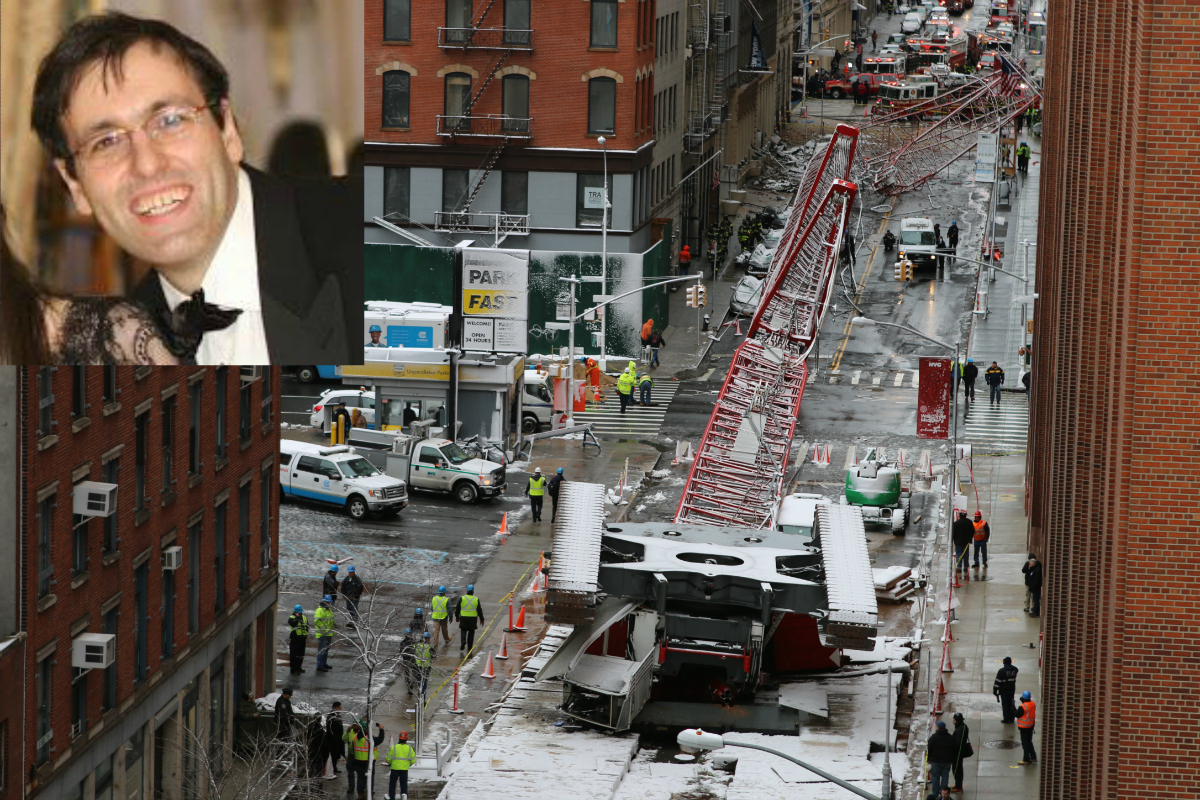 Crews had been directing pedestrian and road traffic away from Worth Street before the crane fell, officials said.

Eyewitness Tony Menendez, a Telx employee at 60 Hudson St., watched the operator lower the boom amid the intensifying weather conditions, he said.

"It started getting windy," Menendez said.

"The crane was coming down. It got to a certain pitch like this," he said, holding his arm at 45-degree angle. "And then all of the sudden the wind started picking up and it came straight down."

Video of the crane collapse

Three men on the street at the time bolted for cover, he said.

The toppling crane slammed into some nearby buildings and shook others when it hit the ground, neighbors said.

Menendez said that police frantically tried to pull the man out from under the crumpled equipment.

Officials confirmed that one man, David Wichs, 38, who reports said emigrated from Prague and lived on the Upper West Side, was killed on the street.

Sergeants Benevolent Association Vice President Bob Ganley, whose office window overlooks the street, saw the boom drop. He and two coworkers raced to the scene and found a man sitting in a crushed car. Miraculously, the man was unharmed, he said.

They found Wichs laying on the side walk and put a blanket over him.

The impact of the equipment shook the neighborhood.

"It sounded like a bomb," said Mark Melville, a construction worker at a nearby site.

"I look over and I see the bricks were flying up the block," Melville added.

Falling debris injured another three people, officials said. Two people — a 45-year-old woman, a 73-year-old man — were treated for serious injuries at Bellevue while a another only suffered minor injuries, officials said.

"Our hearts go out to the families of the individual who was lost and all those who were injured," Mayor Bill de Blasio said during a press conference Friday morning.

Wichs immigrated to the United States as a teen, later earned a mathematics degree from Harvard and was worked at the financial trading firm Tower Research Capital, according to the Associated Press.

He graduated from Harvard, where he was co-chairman of the campus Hillel group, in 2000, the university said.

Wichs was "the most brilliant person ever," his sister-in-law told the wire service.

"It's a miracle there wasn't more of an impact. Thank God we didn't have more injuries and we didn't lose more people," de Blasio said.

Officials with both Galasso Trucking, which operates the crane, and the Bay Crane Company, which owns it, declined to comment.

"I believe they were doing the right thing bringing it down, but somebody should have looked at the weather last night," Menendez said.

NYPD detectives were interviewing the crane's operator to determine if any criminality was involved in the deadly collapse, police officials said.

The crane had been replacing air conditioners and generators atop 60 Hudson St., the former Western Union headquarters, officials said.

The crane was erected a week before and crews had added an extension on Thursday to better reach the roof, officials said. The Department of Buildings had visited the site that day and approved the work that was being done there, officials said.

A woman who lives nearby said she saw work men putting plywood in front of the crane's tracks to help it gain traction.

"They inched the crane forward. They couldn't move it so they put large pieces of plywood, they put them in front of each of the two treads — 3 or 4 sheets," said artist Vivien Collens, who watched the work from her fourth floor window.

Con Ed got reports of a gas odor in the area and their crews are digging up a low pressure main to cut off gas to four buildings in the area, according to utility spokesman Alfonso Quiroz.

Con Ed and FDNY crews were continuing to scour nearby buildings for more leaks, officials said.

"So far they have not detected the gas levels that would give them fear of problems, but they are literally sweeping them every 15 minutes," de Blasio said.

The 1 train was bypassing the Franklin Street station, the Office of Emergency Management said.

After Friday's deadly collapse, city officials said all cranes throughout the city had to be secured because of the high winds.

"Wind levels have not reached levels we would need for a normal shut down, but we've take the precaution of securing the cranes around the city," the mayor said.

In the meantime, crews worked to clear and secure the site.

"It will certainly take several days until we get things back to normal," de Blasio said.

Due to a construction incident, expect traffic delays & emergency personnel near W. Bway & Worth St in Manhattan. pic.twitter.com/GXAXXPJYwF