BEDFORD-STUYVESANT — An historic sign that pointed straphangers in the direction of a Bed-Stuy church has disappeared, church members said.

The MTA had to replace the sign, which gave directions to the Concord Baptist Church of Christ to people arriving at the Nostrand Avenue A/C south-bound train station.

Rev. Dr. Emma Jordan-Simpson, executive pastor of the Marcy Avenue church, estimated that the placard had been hanging near the turnstiles since the early 1960s.

But, in early November, Concord’s members who frequent the subway stop told Jordan-Simpson the church’s sign had gone missing.

“We were trying to figure out what happened to it. It just felt empty,” Jordan-Simpson said. “It was sort of a banner for us, and that it wasn’t there was immediately noticed.”

Concord, a block-long church on Marcy Avenue between Madison Street and Putnam Avenue, served as a beacon for Bed-Stuy for decades.

The church was started by abolitionists in 1847 and moved to central Brooklyn in 1939. A fire ravaged the building in 1952, but the community rebuilt it under the leadership of senior pastor Rev. Gardner C. Taylor.

Taylor helped provide neighborhood services such as the Concord Federal Credit Union, an elementary school and resources for the elderly.

The city co-named a stretch of Marcy Avenue after him with “Rev. Dr. Gardner C. Taylor Boulevard” following his retirement in 1990.

Ironically, the original marker had been wrong for years, she added.

It incorrectly read, “SOUTH: MARCY AND PUTNAM AVENUES,” when it should have been directing people north of the station. 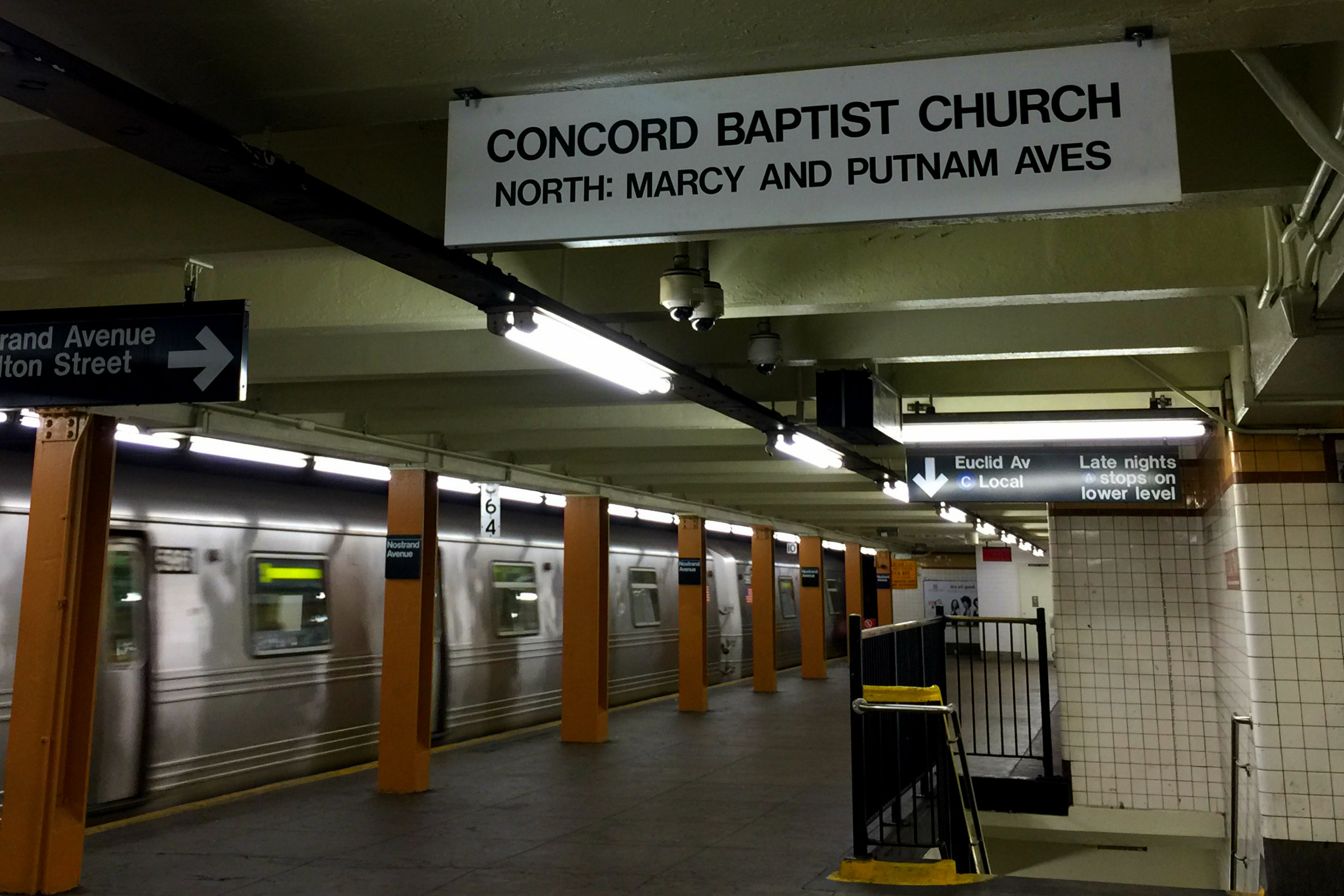 The MTA replaced the missing sign this week with an updated version that includes the corrected direction for the church. Photo credit: DNAinfo/Camille Bautista

Church leaders worked with the MTA to remedy the situation after it went missing.

The MTA put up the original sign, according to an agency spokesman. No details were available on how long it had been in existence.

The sign was most likely stolen, the representative said, but church leaders said they had not worked with local law enforcement for further action.

The MTA replaced the sign in early December, though the updated marker had the same “SOUTH” directional error.

By Thursday, a corrected placard hung in its space telling visitors to head north to Concord.

“That sign is a piece of history, but it’s more than history,” Jordan-Simpson said. “It’s important to us that it stays there.

“This is our home, and there’s a great deal of change happening in the community. We’re staying here and we want to be the resource for new and old neighbors, to let them know we’re here.”

The sign’s replacement was of significant importance to the church this season due to a large, upcoming event hosted by Concord, the executive pastor added.

The church will host its annual concert for Handel’s “Messiah,” on Dec. 20 at 4 p.m.

“People come from all over” to visit, Jordan-Simpson said.

“We want to make sure people find their way to Concord."