REGO PARK — The driver of a private casino shuttle bus slammed into a home near Woodhaven Boulevard Monday to avoid crashing into another car, seriously injuring himself and passengers, witnesses and officials said.

The bus, which shuttles guests to Resorts World Casino in South Ozone Park, crashed into 87-17 63rd Ave., near Woodhaven Boulevard, about 2:24 p.m., FDNY and Department of Buildings officials said. 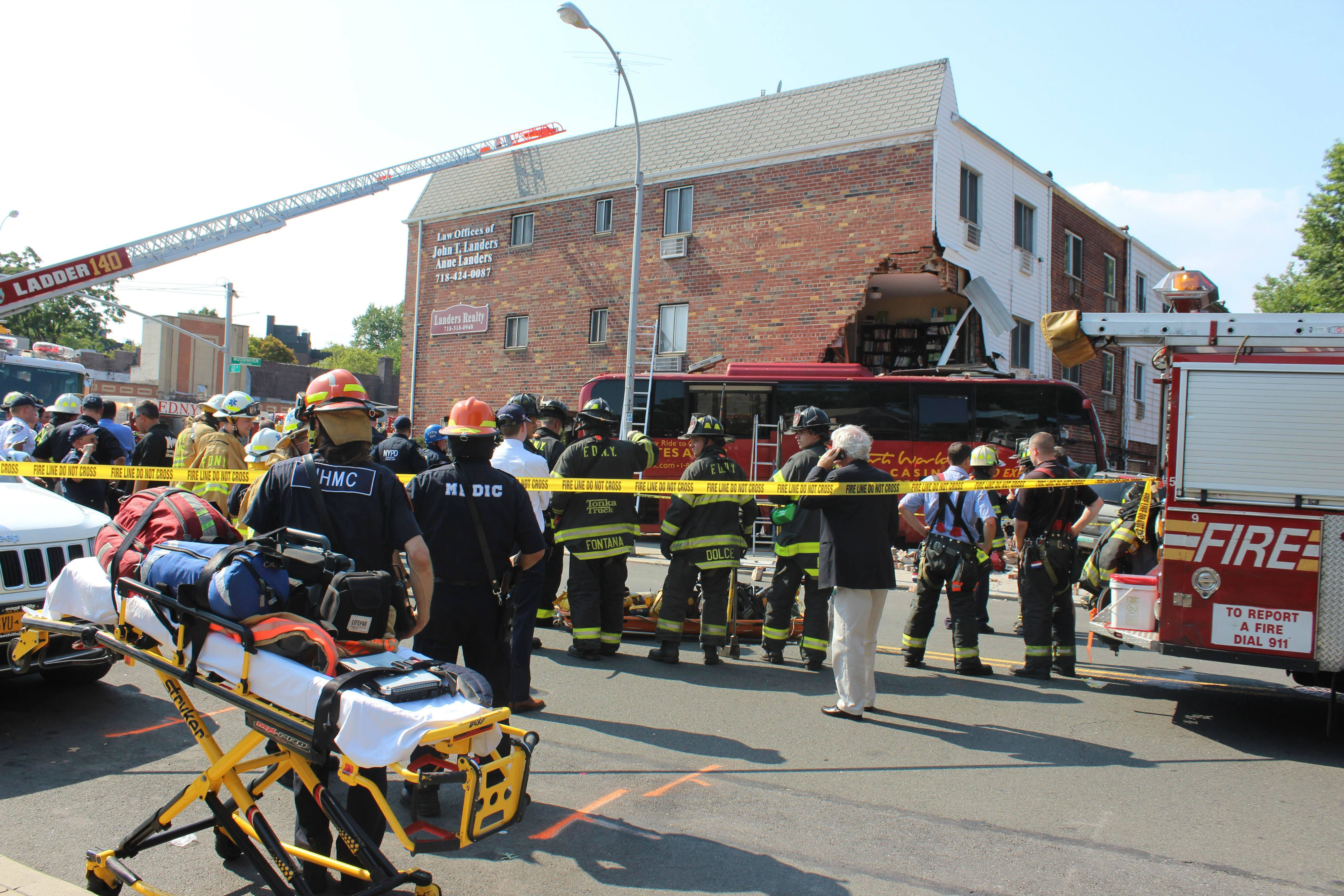 Six people were transported to local hospitals with various injuries, according to the FDNY.

Five were from the bus, including the driver, who had to be cut out with the jaws of life and suffered serious injuries, FDNY spokesman Frank Dwyer said.

"He had trauma, all that debris was on top of him, very serious condition," Dwyer said.

The bus driver was taken to New York Hospital Queens, according to the FDNY.

Another person who was inside the home was taken to a local hospital, Dwyer said.

A witness said the bus crashed into the brick home after it swerved away from another car as both were driving northbound on Woodhaven Boulevard.

"And both of them were going at a pretty good speed so in order not to hit him, the bus swerved and ended up crashing into the building," witness AnnMarie Constantinides, 43, said.

“There were no emergency exits, so people were trapped in there [inside the bus], and they were panicking and banging on the window." 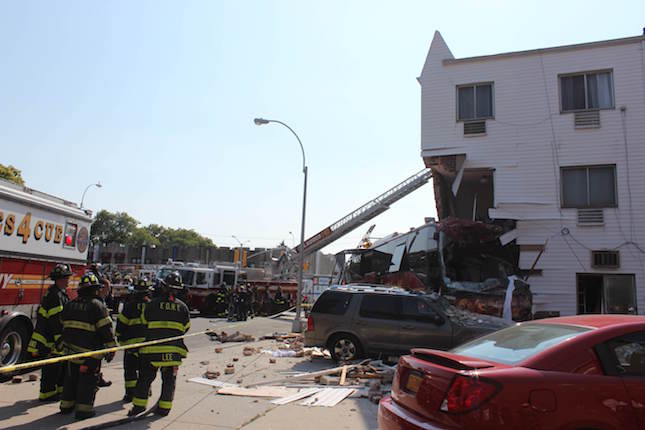 Daniel Kimyagarov, 16, lives next to the accident and brought a ladder out to help trapped passengers, he said.

All of the passengers appeared to be elderly, he said.

His twin sister, Emily Kimyagarova, said they sprang to action even though they didn't know what was going to happen.

"It was really scary," she said. "We weren't sure if something was going to explode." 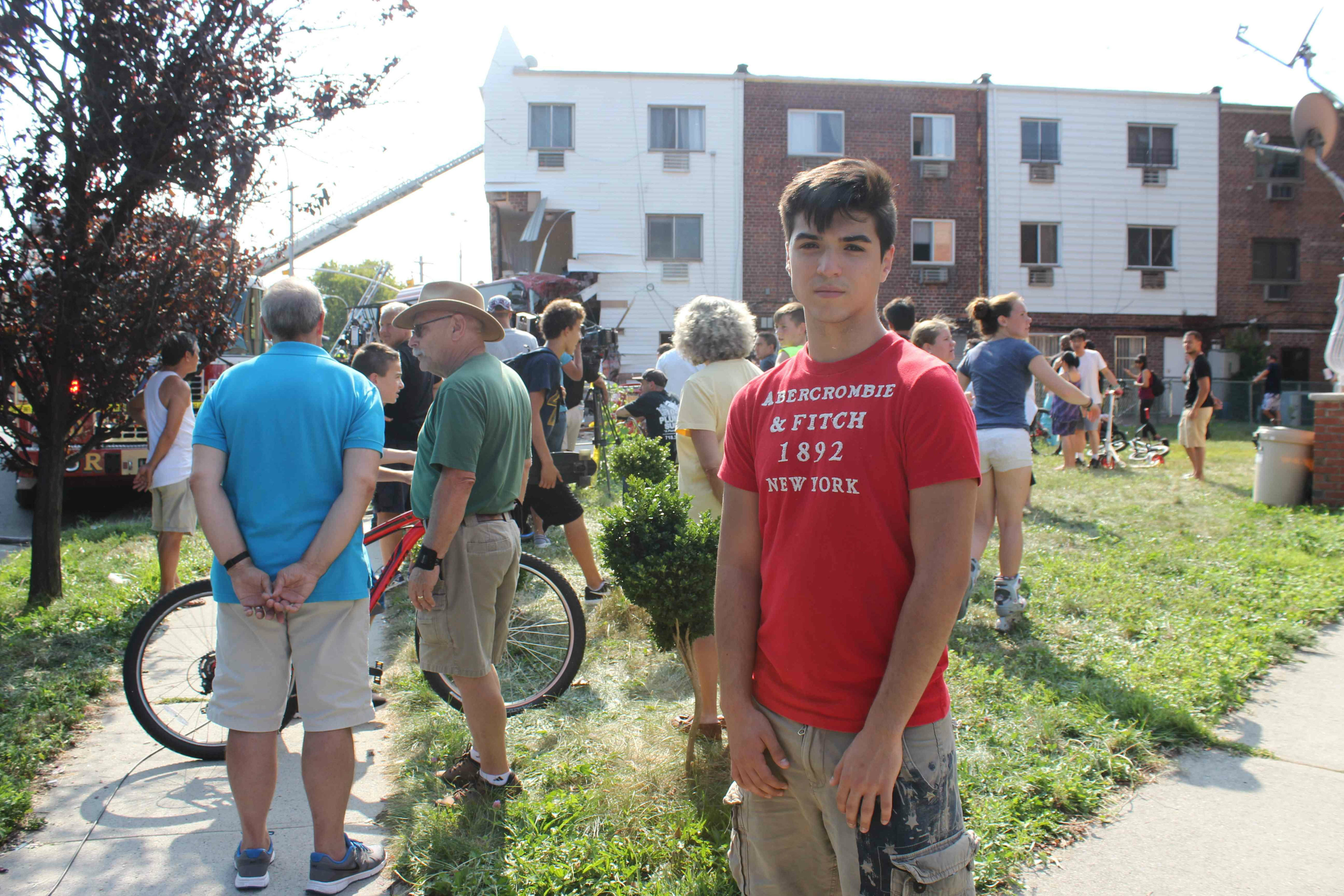 Daniel Kimyagarov, 16, helped save elderly passengers from the bus that crashed next to his Rego Park home. (DNAinfo/Ewa Kern-Jedrychowska)

Firefighters propped up the house with two-by-fours to keep it from collapsing further, Dwyer said.

The FDNY will remain on scene with the Department of Buildings to continue to check the structural stability of the house, which is attached to other homes.

The bus is one of many that's part of a free transportation program called the "Red Express," which has stops in Elmhurst and Flushing, as well as multiple stops in Manhattan and Brooklyn, according to a schedule on the casino's site.

It's operated by the Brooklyn-based Trans Express, Inc., according to the website.

A spokeswoman said they are "working with the local authorities as well as conducting our own investigation in the accident."

A spokesperson for the casino said their "thoughts and prayers are with those impacted by today's bus accident," and said they're also cooperating with an investigation.

The driver of the other car, a grey Scion, said that the accident was not his fault, and that he was trying to turn into 63rd Avenue when the bus hit him, breaking his mirror. The 37-year-old from King of Prussia, PA, who did not want to be identified, said he was visiting friends in Queens.

"I feel very sad for the people on the bus. I didn't want to hurt anybody," said the driver of the Scion, who was not injured.

Officials said that as of Monday afternoon no arrests had been made and no summonses had been issued.

Authorities said the investigation is ongoing.