Former Mailman Petitions Postal Service to Use His Redesigned Uniforms

BROOKLYN — A former postman is looking for a stamp of approval from the U.S. Postal Service when it comes to updating the agency’s uniforms.

Marty Grace, who worked as a mail carrier at a Bedford-Stuyvesant post office and other locations for 22 years, creates his own USPS gear and sells the merchandise to postal workers around the country, he said.

“I got involved because of the need,” Grace said. “The light blue shirts we were wearing were always getting dirty, and everybody wanted something fresh-looking.”

Grace, 48, has been selling his shirts since 2002 and recently launched an online petition asking the federal agency to approve the designs.

The Jamaica, Queens resident creates dozens of unofficial uniform variations in his home — screening and pressing up to 300 shirts a day, he said.

His company, Designs by Marty Grace, offers navy blue polo shirts with “USPS” and “United States Postal Service” emblazoned in all caps across the front, along with tees that incorporate the eagle head logo and tops that identify employees’ position within the service.

The back of the shirts showcase the link to the USPS website.

“I see it as free advertising for them," Grace said. "As a former carrier, I’m only doing this to make them look better."

“I wouldn’t be doing this if the demand wasn’t there. For the customers, it’s the motto of, ‘When you look good, you feel good about the job you do.’”

Buyers purchase the gear online or out of Grace’s mobile store — the salesman also makes daily rounds outside post offices throughout the five boroughs in his Dodge Caravan.

In 2008, he was banned from selling his wares at local post offices, according to the Daily News. 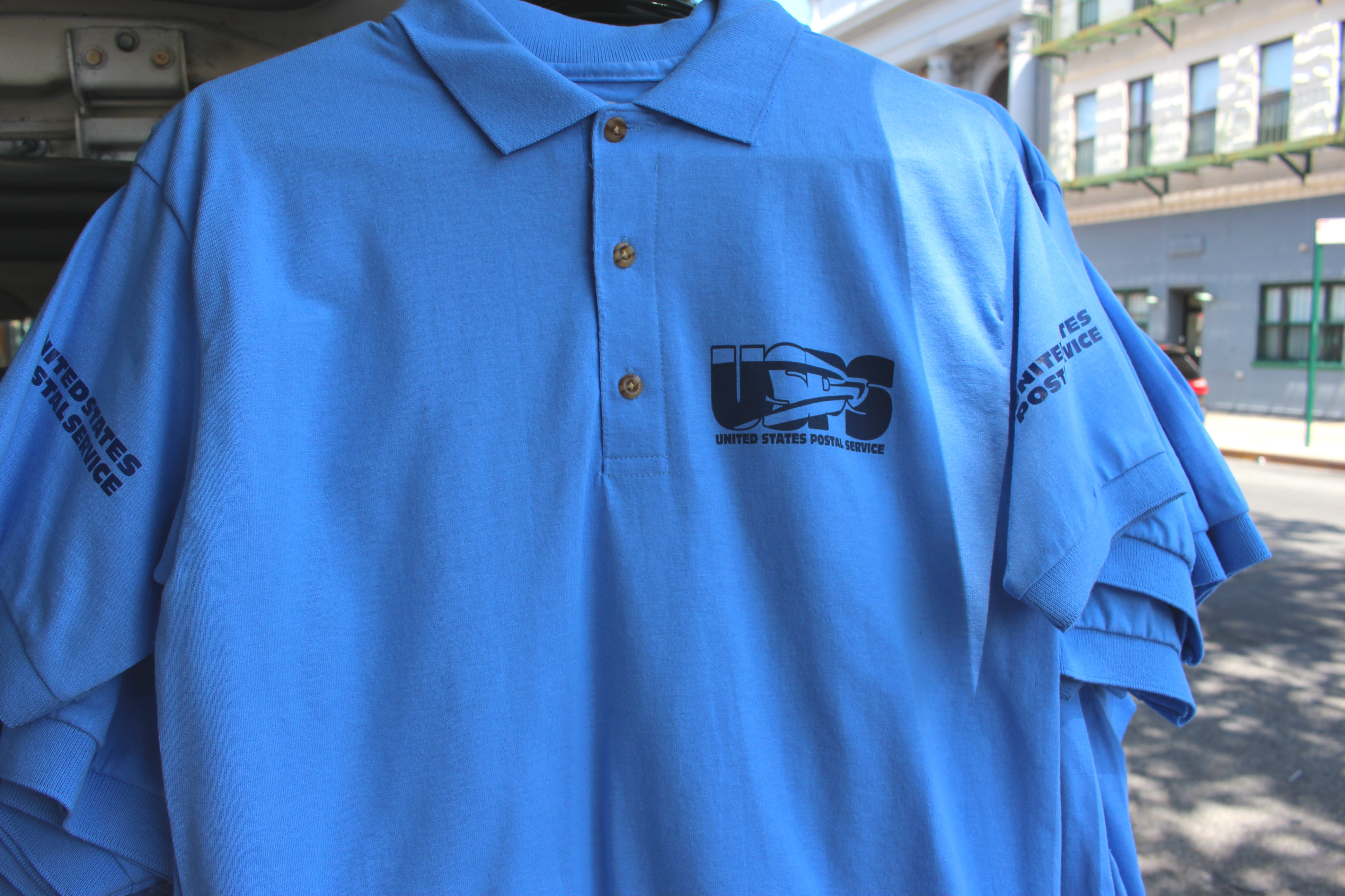 Grace estimates he has close to 50,000 workers nationwide rocking Designs by Marty Grace, or MG.

He resigned from his Brooklyn post office in 2007 to dedicate himself full-time to the clothing business, he said. Employees at the Brevoort Station were wearing MG, which piqued the interest of other postal workers in the borough, Grace added.

The light blue button-ups worn by letter carriers are among the standard uniforms for USPS employees, workers said. Employees are provided a negotiated allowance to purchase authorized items, according to a USPS spokeswoman.

Supervisors can take action when employees are out of uniform. Still, many clerks and mail carriers said they prefer to spend their own money on Grace’s gear.

“The shirts they make us buy are rough on the skin, they’re outdated and uncomfortable,” said Mevy Valentino, a Staten Island letter carrier.

“I saw a couple of carriers from Brooklyn with Marty’s stuff, and I brought it to my whole station. They’re modern, and I’ve gotten nothing but compliments on the road from customers. It just feels good.”

Bobbi Haden, a postmaster in Strafford, Mo., said that while her employees are not required to wear uniforms, her ten workers prefer to wear MG to make them identifiable. 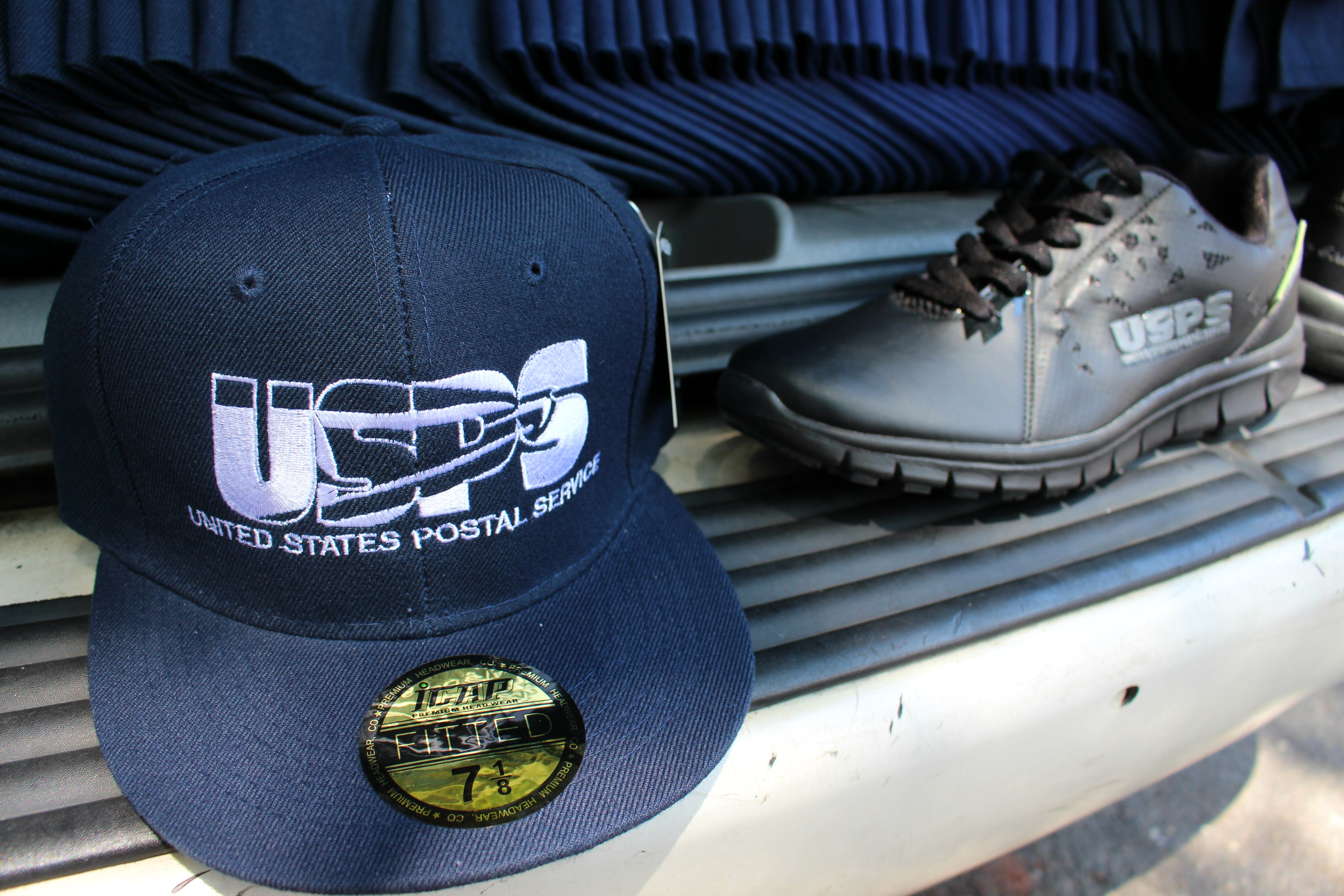 There are currently 185 vendors authorized to sell postal uniforms — MG's designs not being one of them, a USPS spokeswoman said.

When needed, the Postal Service will issue an online solicitation for vendors, and applicants must agree to meet specific conditions, including buying items from certified Postal manufacturers, the representative said.

Grace said he has been unsuccessful in pitching his designs to the USPS for approval over the years.

He contacted the agency most recently in January, a Postal Service rep said, and was advised that the USPS was not accepting new vendors.

“Under the Uniform Program, Mr. Grace is not an authorized vendor,” the agency said in a statement, adding that the Postal Service has not added new vendors over the past three years as “we have sufficient vendors to meet our needs.”

While he said he’s frustrated, it hasn’t stopped Grace from peddling the wares and expanding his brand. He’s made USPS sneakers, hoodies, sweaters, hats, and cargo shorts in a variety of styles and colors.

“I’m not going to let them overlook me like I never existed. Everybody’s buying my stuff,” Grace said, adding that he hopes to be authorized soon.

7 Reasons Why Your Daily Commute Is Slowly Killing You