EAST HARLEM — When Hamida Mohamed got into her Toyota sedan at 105th Street and Third Avenue last August, the car smelled like death.

A rat, one of hundreds that have plagued a corner of East Harlem for years, had climbed into Mohamed’s engine and died.

“It smelled really bad,” Mohamed said. “It is the worse thing I have ever smelled.”

The rat population between Third and Lexington avenues along 103rd and 109th streets has gotten out of control, according to the Department of Health and Mental Hygiene.

In October, the department started cracking down. The zone has been deemed a “Rat Reservoir,” meaning it has a history of  “chronic rat activity,” said Caroline Bragdon, the department’s rat expert.

► HOW TO FIGHT OFF A RAT INFESTATION ON YOUR BLOCK

► TIPS TO KEEP RATS OUT OF YOUR GARDEN

Typically in the winter there is a reduction in rat activity because they struggle to survive in the cold. But if they find warm areas with plenty of food, the rats may stick around, she said.

“What we’ve done so far is a complete block survey of the area,” Bragdon said. “We’ve identified all of the areas with rat activity or conditions conducive to rats. Now we are sending our own extermination staff out to treat the public areas.”

Those public areas include tree wells, sidewalks and catch basins, she added. 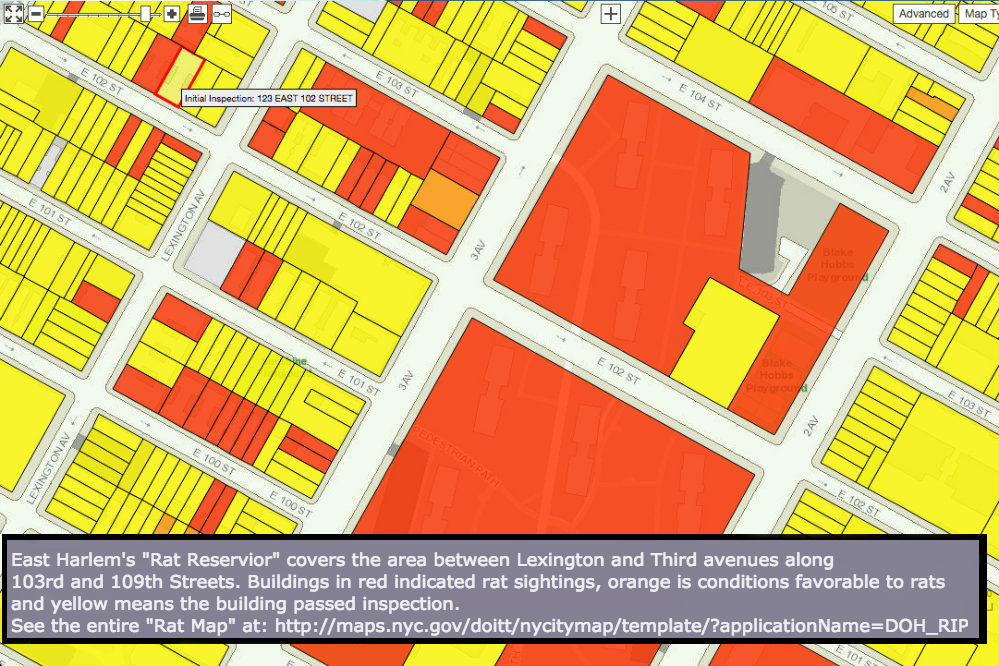 Apart from exterminating in the public areas, the Health Department is reaching out to residents and business owners. Multiple factors, like not throwing trash away properly or not maintaining property, contribute to the problem, Bragdon said.

“The most important thing is to containerize garbage especially during the times rats are feeding; so from dusk to dawn garbage should be contained,” she said. “We also recommend that businesses and multi-family buildings work together to keep their block clean.”

If rats get into a building they can damage the wiring and chew holes under the doors as they look for food. They usually go to the garbage room and then people’s apartments, she added.

One of the most notorious areas is 104th Street between Second and Third avenues, said Laquan Rhodes.

“People call that Rat City,” she said. “They run to their apartments.”

It’s common to see two or three rats on one block dart across the sidewalk. Some of them are as big as small dogs, Rhodes added.

The Health Department plans to host a community forum in late February or early March where locals can learn about things they can do to help eradicate the rat infestation, Bragdon said.

Additionally, call 311 or contact the “Rat Portal” to have inspectors walk through your building and help find ways of getting rid of the rodents, she said.