MANHATTAN — The NYPD boss in charge of the department’s new Twitter initiative apologized for a series of eyebrow-raising tweets sent out by the captain about a woman who died this weekend when she fell off a subway platform and was struck by a train.

“We are going to stumble. We are going to make mistakes,” Deputy Commissioner for Strategic Initiatives Zachary Tumin told DNAinfo Monday, a day after apologizing to a safety advocate who was blasted online by Harlem's 25th Precinct Commanding Officer using both his personal and professional Twitter accounts.

The social media feud began Sunday, when the commander, Capt. Thomas Harnisch, who was one of the first precinct commanders to start tweeting in April, sent an apparently unprompted Tweet to safety advocate Keegan Stephan about a woman who was fatally struck by a subway train in Union Square.

“Let me guess, driver’s fault right?” Harnisch wrote from his private Twitter account to Stephan and pedestrian safety advocate group Transportation Alternatives, alongside a link to a WCBS story about the incident. The feud was first reported by StreetsBlog NYC and Gothamist.

Stephan, 30, who is an organizer with the safety advocacy organization with Right of Way, wrote back, “A woman is dead and you are using this as an opportunity to criticize our attempts to save lives?” 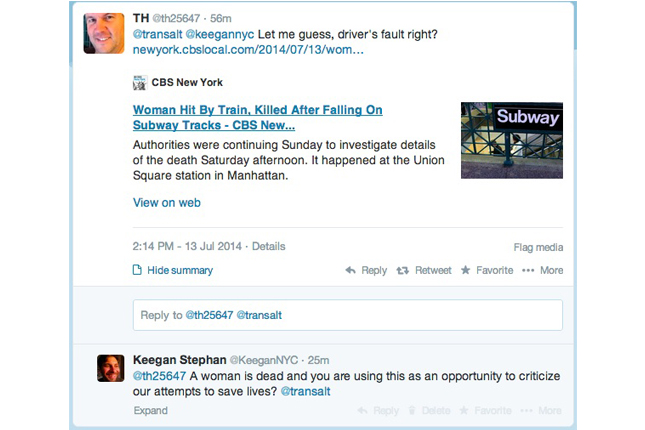 Harnisch replied from the 25th Precinct's official account, writing, “Isn’t that exactly what you do? Seize on a tragedy and assign culpability having no facts? To further your agenda?”

The tweet was later deleted, but Stephan managed to get a screen shot of the entire exchange, which he shared on Twitter.

“I was so shocked,” said Stephan, who said he didn't realize who Harnisch was until he used his 25th Precinct Twitter account. “My immediate reaction was ‘Wow, precinct commanders are now trolling me.'” 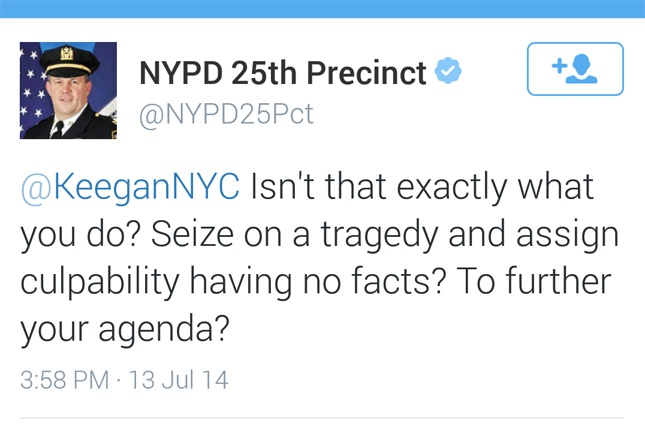 Stephan said he and Harnisch had never spoken in person or online, and that he didn't know what prompted the outburst. He said Tumin reached out to him through Twitter and called to apologize Monday morning.

Sincere apologies 4 insensitive & unprofessional tweets. Not how I was raised, trained, have served. Will work 2 restore trust/confidence.

Tumin, who is overseeing the NYPD's initiative to have all precinct commanders tweeting by the end of the year, defended Harnisch as being very passionate about reducing pedestrian fatalities.

Despite the exchange, Stephan said he was appreciative of Tumin's call and added that he's pleased overall with the NYPD’s new Twitter initiative.

“It is valuable [that] they are becoming more transparent and apologized for this," Stephan said. "It’s very impressive to me.”

5 Takeaways From the Inwood Rezoning Proposal