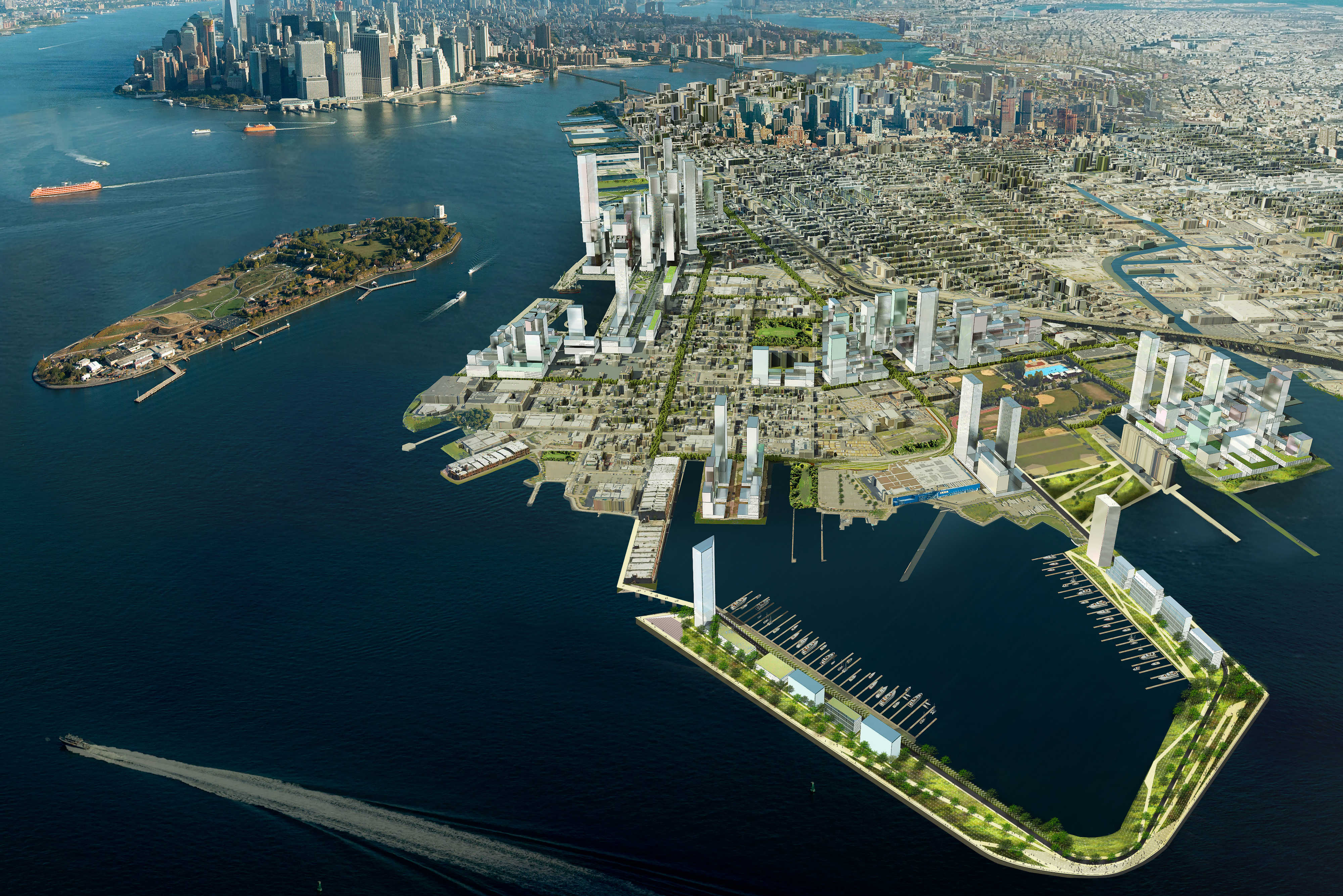 A rendering of the proposed redevelopment for the Red Hook waterfront. [Credit: AECOM]

RED HOOK — A vision for a massive redevelopment that would add thousands of residential units to the Brooklyn waterfront and a subway connection to lower Manhattan has been put forward by global engineering firm AECOM.

In the report shared with DNAinfo New York on Monday night, AECOM has reimagined Red Hook with as many as 45,000 new residential units and a new No. 9 train that would extend from Manhattan's No. 1 line and connect to Park Slope.

The AECOM rendering envisions mid- and high-rises replacing the Red Hook Container Port, the Red Hook Cruise Ship Terminal, the NYPD tow pound, alongside Red Hook Houses and at the mouth of the Gowanus Canal. Many of the developments would occupy city- or Port Authority-owned land.

"Red Hook is the New York City neighborhood that can accommodate the most density without displacing the existing community," according to the document, which describes the "framework" of the development.

"However, additional density of the proposed magnitude cannot be accommodated without substantial infrastructure and open space improvements."

Development of southwest Brooklyn — collectively Red Hook and Sunset Park — would be a crucial way to catch up to the city's growing housing crisis and worsening vacancy rate, currently at 3.45 percent, said Chris Ward, AECOM senior vice president and project director who spoke Tuesday morning at the NYU Rudin Center for Transportation.

Though the neighborhoods offer a huge canvas with lots of undeveloped spaces to work with, they come with a unique set of challenges, such as severe coastal flooding and isolation from public transit.

"I don't think you can find a bigger and more complex one than southwest Brooklyn," said Ward, who formerly served as executive director of the Port Authority of New York and New Jersey.

The plan, however, is just a framework for development and is subject to change. Ward stressed that these were only potential scenarios and community buy-in was crucial before the plan could move forward.

Yet even in its early stages, the lack of outreach to residents rankled some in the audience for the NYU panel.

"You've got to talk to the community first," said Red Hook local Alexandros Washburn, a professor of design at Stevens Institute of Technology. 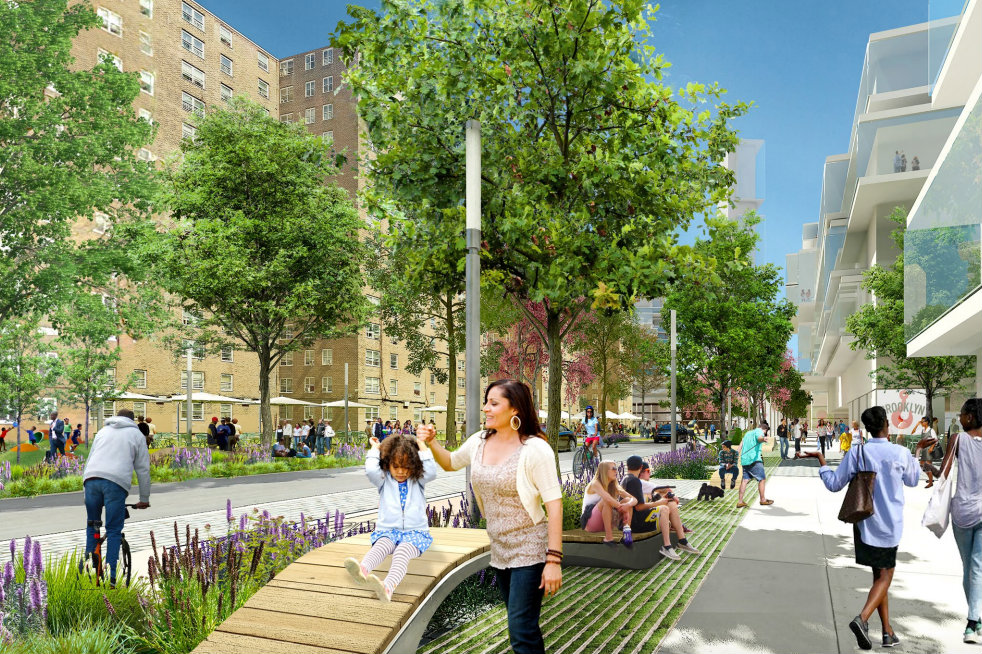 A rendering for the streetscape that would run between Red Hook Houses and new residential development. [Credit: AECOM]

AECOM, which funded the report itself and had a 30-member team create it, has outlined three different development scenarios of increasing size and scale for southwest Brooklyn.

Two of the scenarios involve building subway infrastructure, which includes three new subway stops that would connect Red Hook to Manhattan and Park Slope. The firm envisions that the subway construction could be partially funded by revenue generated from the new residential development, but admits that additional sources of funding would be necessary.

The new stations would be at Atlantic Basin — near the bulk of the proposed new development in Red Hook — on Lorraine Street near Red Hook Houses, and a stop at Fourth Avenue and 10th Street in Park Slope with connection to the F/G and R trains. 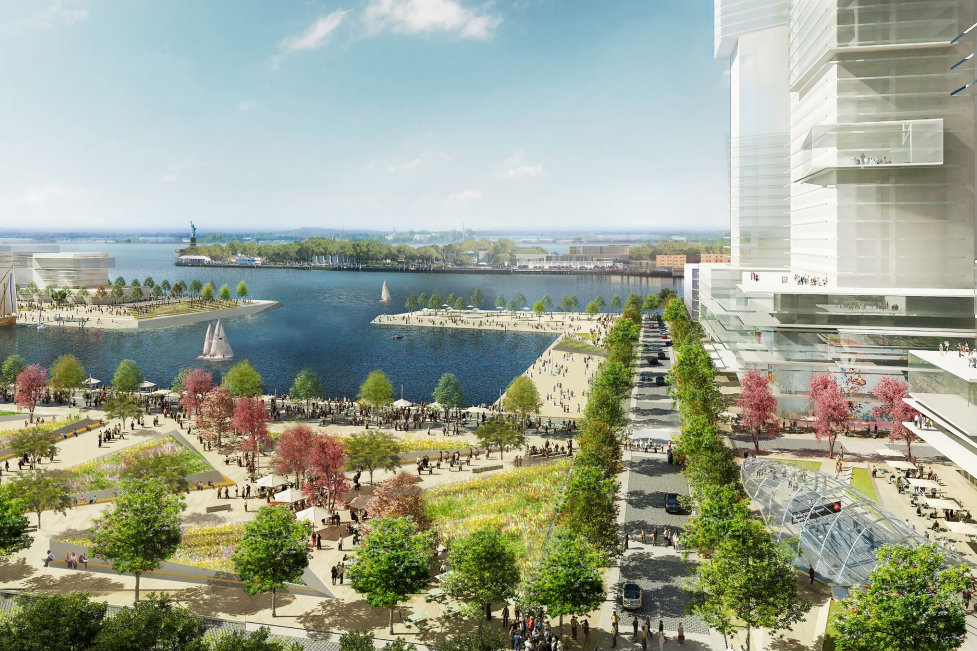 A rendering of AECOM's vision for Atlantic Basin, with residential developments and a subway station seen on the bottom right corner of the image. [Credit: AECOM]

The same two scenarios — which would add 35 million and 45 million square feet of development respectively — also involve large swaths of new park land and a quarter of the new apartments as affordable housing. They would bring in $90 million and $130 million in annual city revenue respectively, AECOM forecasts.

The smallest development scenario, at 25 million square feet, would neither support a new subway connection nor the addition of parks and pedestrian improvements. It would create $50 million in annual city revenue.

All three scenarios envision some form of coastal protection for the flood-prone areas.

Mayor Bill de Blasio, who is up for re-election next year, has turned the creation of affordable housing into signature policy of his administration, and AECOM's proposal could support that goal. The mayor has already backed a plan to build a 16-mile streetcar system along the waterfront in Brooklyn and Queens.

Though construction of that scale and magnitude would lead to jobs in the neighborhood, Gary LaBarbera, president of the Building and Construction Trades Council of Greater New York, questioned the wages and benefits that would be offered.

"These have to been good, middle class jobs," he said at the NYU event, "sustainable jobs and jobs that actually have a career path."

AECOM officials said they have reached out to the City Planning Commission, the MTA and Port Authority regarding the plan, but did not comment further on discussions.

Southwest Brooklyn: Growing From The Waterfront Again by nikhitavenugopal on Scribd