The city's Department of Environmental Protection expects to start construction in May on nearly three miles of "high-level" storm sewers that will keep stormwater out of the city's sewage system — a problem that turns Gowanus streets into rivers on rainy days and sends sewage into the Gowanus Canal.

"High-level storm sewers are a high-level achievement for Gowanus," said City Councilman Brad Lander, who cheered the project along with other officials. "They will reduce sewage overflow into our canal and flooding onto our streets."

High-level storm sewers are designed and built specifically for stormwater; they don't carry wastewater or sewage. The new sewers will help prevent raw sewage from flowing into the canal, which happens now when stormwater overwhelms the city's sewage system.

The DEP project will install 87 new catch basins that will suck up stormwater from the street and keep it away from the sewage system, DEP officials said Monday.

Construction on the project will be done in two phases. The first will start this spring and be completed by spring 2018, the second will start in 2018 and be finished by 2020, DEP officials said. 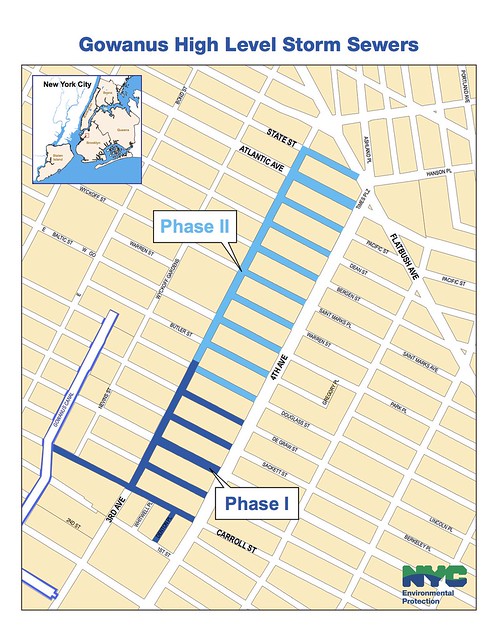 Installing the new sewers will mean another long stretch of ripped up streets along Third Avenue between State and Carroll streets, as well as on side streets leading to Fourth Avenue.

Residents and businesses have endured construction there since 2014 because power and gas lines had to be moved for the high-level sewers.

DEP Commissioner Emily Lloyd said the high-level storm sewers "will complement the more than $200 million the city has already invested in improving the health of the Gowanus Canal."

In 2013, DEP reactivated a flushing tunnel that pumps fresh water into the heavily polluted canal. The agency is also building 90 "bioswales," tiny curbside gardens that sop up stormwater and pollution.

Below, a May 2013 video of flooding in Gowanus:

I GOT AN IDEA.....LETS BUILD HOMES HERE SO THEY CAN ADD TO THE FLOODING PROBLEM......ITS NOT ENOUGH THAT GOWANUS MANUFACTURERS SUFFER ALREADY, LETS ADD TO THE MISERY!

Posted by Gowanus Alliance on Wednesday, May 8, 2013