Billy Idol, The Roots Get Huge Payday For Playing Taste Of Chicago

Rocker Billy Idol will make $100,000 when he plays the Taste on July 9 — and be provided, per his request, with clean dressing room furniture and freshly washed bath towels ("absolutely no new unwashed towels anywhere please!")

The 61-year-old also needs, according to his contract, a fully air-conditioned dressing room with an adjacent private bathroom (his people underlined "private"). His dressing room must have comfortable furniture, end tables and lamps, with "ambiance appreciated."

The details of the the stars' demands are included in contracts obtained through the Freedom of Information Act. Musicians often stipulate special requests, called riders, in their contracts when they agree to play shows. The riders can be finicky (no brown M&Ms for for Van Halen) and very specific. Mariah Carey reportedly requires Cristal Champagne and two dozen white roses in her dressing room.

The city's contractual obligations to The Roots and Billy Idol aren't Van Halen-level demands, but still illustrate what it takes for the city to appease the stars. The Roots, who now serve as "The Tonight Show" house band, for example, specifically requested 20 new black hand towels. They also asked for cereals in three categories: "chocolate," "healthy" and "sugar."

The city's Department of Cultural Affairs and Special Events said last year's performances netted the city $320,205 in profits even after the stars got paid.

Some contracts for other Taste headliners this year, including The Decemberists, were not made available because they had not been finalized at publication time.

Here are the highlights of the 2016 Taste artists' fine print:

Fee: $120,000
Riders: 20 new black hand towels
• 20 new white hand towels
• 12 bottles of Vitamin Water
• One bag of natural Lay's BBQ potato chips
• One jar of honey
• Assorted teas, one of which "MUST BE GINGER TEA"
• No wheat or pork products in catering or dressing rooms

• One half-gallon bottle of milk
• One bottle of Pinot Grigio
• Four bottles of Veuve Clicquot Champagne on ice
• One bottle of Silver Patrón tequila; one bottle of Hibiki or Yamakazi whiskey
• Six cans of Red Bull
• One package of Bic lighters
• Four packs of Backwoods Smokes cigars (orange & tan package)

Fee: $100,000 less the cost of upgraded airfare
Riders: City to provide for seven first-class flights and 14 coach seats one-way from Los Angeles to Chicago (a city spokeswoman said these arrangements are often funded by corporate sponsors, but did not to say if that was the case with Idol's contract)
• City to provide one suite, one junior suite and 19 single rooms at the Hard Rock Hotel, 230 N. Michigan Ave., for two nights
• City to provide 15 passenger vans and a town car or SUV to transport Billy Idol to/from O'Hare airport, hotel and venue
• 10 cleanly washed bath towels and natural bar soap for Idol's dressing room; four towels and bar soap for Idol associate Steve Stevens; and 20 towels and bar soap for rest of the band/crew
• A dressing room with "ambiance appreciated" 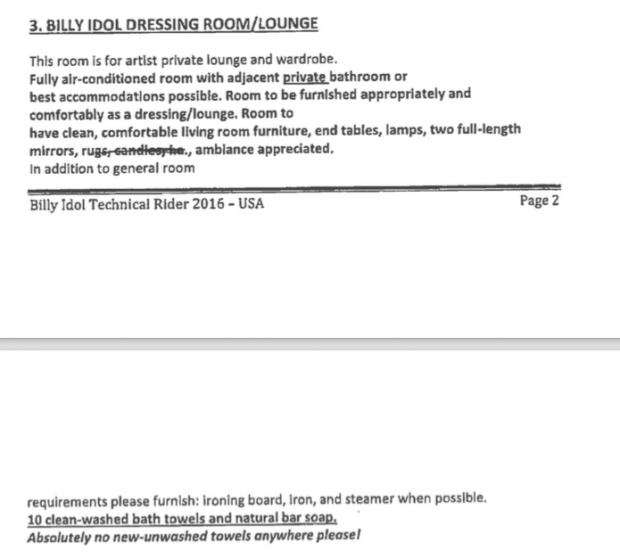 Fee: $25,000
Riders: City to provide up to four hotel rooms for one or two nights, as well as ground transportation
• Bag or bowl of Cuties Mandarin oranges
• Fruit tray
• Eight bottles of water

Fee: $20,000
Riders: City to provide one suite and 20 hotel rooms for one or two nights at the Hard Rock Hotel, plus ground transportation and 20 "top-priced, best seat location" tickets to the show.

Fee: $10,000
Riders: Struck due to food and refreshments already being served in common catering room

Sons of the Silent Age

Fee: $5,000
Riders: Two parking passes and water or pop at the venue