The project was postponed last year after DNAinfo Chicago reported warnings that the planned work could unearth thousands of bodies buried in a long-forgotten Dunning cemetery that holds the remains of Chicago's poorest and sickest residents who died between 1890 and 1912.

As many as 10,000 bodies are buried under what is now Oak Park Avenue, which is set to be rebuilt between Irving Park Road and Forest Preserve Drive starting this week.

It was not immediately clear whether the roadway would be reconfigured or the bodies exhumed.

When officials with the Chicago Department of Transportation put the roadwork on hold, they said they would craft a plan to handle the remains and submit it to Illinois Historic Preservation Agency in compliance with the Illinois Human Skeletal Remains Protection Act.

Sposato's announcement that the roadwork would restart this week made no mention of that plan.

A spokeswoman for the Chicago Department of Transportation told DNAinfo Chicago the city would discuss the project later Monday.

A spokesman for the Illinois Historic Preservation Agency could not be immediately reached for comment.

An exploratory dig carried out by a team of archeologists in July "confirmed a section of Oak Park Avenue built in the 1930s crossed a portion of the unmarked" cemetery, according to a statement from the Chicago Department of Transportation.

Starting in the 1850s, poor and indigent Chicagoans were buried by the county on 20 acres near Berteau and Naragansett avenues near the county poorhouse. The six-acre portion of the cemetery opened in 1890 near Irving Park Road and Oak Park Avenue, and about 17,000 people were buried there.

The cemetery stopped accepting most new burials after the state of Illinois bought the 320-acre property in 1912 and built a mental institution.

When the roadwork begins, northbound Oak Park Avenue will be closed to traffic until the first week of July, when the entire road will be blocked, Sposato said. However, vehicles will still be allowed to reach the Chicago Read Mental Health Center and the Autumn Green Senior Living Center, he added.

The work is expected to be completed in October. 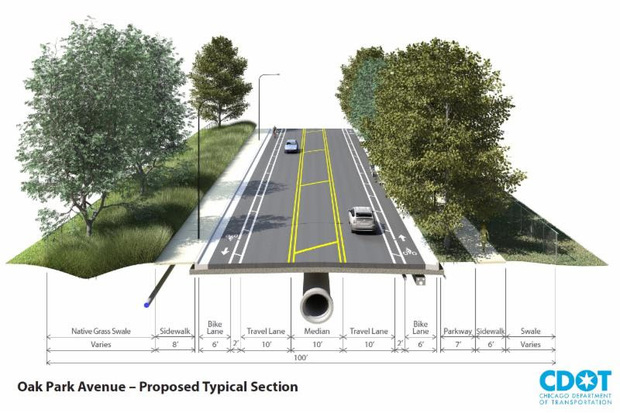 The rebuilt road will have three 10-foot travel lanes and a striped median to allow cars to make left turns. New sidewalks, new lighting and buffered bike lanes will be built along with new curbs and gutters, paid for with $5 million from the Dunning Tax Increment Financing District.

A storm sewer system and vegetated swale will be built to handle flooding issues.

That part of the project will be funded by Mayor Rahm Emanuel's $50 million Green Stormwater Infrastructure Strategy, officials said.

Torrential rains in April 2013 turned streets in Dunning into gushing rivers and left two to three feet of water in residents' basements for weeks.