UPDATE: The Saturday meetup has been canceled. Read more here.

ROGERS PARK — On Saturday, men who follow a controversial "men's rights" blogger are expected to meet in Rogers Park — and Chicagoans are not pleased.

School administrators at Loyola University are urging students who are survivors of sexual assault to avoid the area, and the Rogers Park Police District said during a community policing meeting they are "well aware" of the event and are monitoring it closely.

The gathering is part of an "International Tribal Meetup Day" in 43 countries, where followers of the misogynist Return of Kings blog are supposed to heed the call of their leader, blogger Roosh "Roosh V" Valizadeh, 36, who has written about "legal rape" and has books that describe his sexual encounters with incapacitated women:

"While walking to my place, I realized how drunk she was. In America, having sex with her would have been rape, since she legally couldn’t give her consent. It didn’t help matters that I was relatively sober, but I can’t say I cared or even hesitated."

"I propose that we make the violent taking of a woman not punishable by law when done off public grounds," he wrote on his blog in February 2015. On Wednesday morning — after much public outcry — he tweeted that that year-old blog post calling for legal rape was "satire." In interviews and other blog posts he accuses women of "playing the rape card" when they feel "like a slut" after a sexual encounter and says the definitions of rape are too stringent in America.

Valizadeh's followers are to meet at a flagpole near Devon Avenue and Sheridan Road at the border of Rogers Park and Edgewater Saturday night at 8 p.m. They are then instructed to ask "Do you know where I can find a pet shop?" as a signal to fellow "tribesmen," before walking to a nearby bar or restaurant to hang out. Valizadeh has called for such meetups in multiple international cities, and has said he will attend a Washington D.C. meetup.

Concerned residents in Rogers Park turned to Ald. Joe Moore (49th) to see what was being done about the meeting. When asked about his plans, Moore's Chief of Staff Kevin O'Neil only read aloud the statement he'd made on social media earlier:

First, let me say on behalf of Alderman Moore that he is very disturbed that such a meeting like this is happening anywhere at all, and particularly in his ward. Certainly this is a tiny fringe group with an extreme minority opinion.

As soon as I heard about it this morning [Tuesday] I alerted both the Loyola University community relations and security office, and the 24th District Police. The 24th District has promised a special attention to the area, with police monitoring activities there.

I'm sorry to say, that is about all we can do. The courts have ruled that any group, no matter how hateful or vile its message, has a right to free assembly and free speech under the U.S. Constitution. Of course, they do not have a right to inflict actual physical violence upon anyone, and I am told the police will be closely monitoring their activity to make certain they are at all times conduct themselves in a peaceful and orderly manner.

I know this may not be the answer you were looking for here. But please let us know if there are any other questions we can answer.

When asked if he shared the same outrage as other officials who have spoken out about the group, O'Neil again read from the above statement, adding his office did not want to comment further as to "fan flames" on the issue.

Loyola University officials sent out emails to students warning them of the group's presence.

"There is no direct or specific threat towards the University community," Loyola students were told in an email. A follow-up email from the school stated that their warning aimed to "prepare you for, and call attention to, a controversial event happening ... near the Lake Shore Campus."

The school said it was "being careful not to trigger anyone who may be a survivor of sexual assault."

The email then pointed students to DNAinfo's story on the event.

Sharmili Majmudar, executive director of Rape Victim Advocates, a Chicago-based organization who helps victims of gender-based violence, disagreed with O'Neil's statement that groups like Return of Kings are "fringe" groups and said their rhetoric, no matter how sensational, should not be dismissed.

"This is about how our society continues to view the issue of sexual violence, and I think it's important to raise that so we don't just dismiss this as a one-off, out-of-control fringe group," Majmudar said. "But rather, really think about what are pieces we need to address to confront gender-based violence in our own home."

Majmudar said she found the men's blog showed "deeply problematic" signs of "pretty significant misogyny," and was concerned that his ideas perpetuated harmful myths about rape and sexual assault and how those implications impact society at large.

One way Rape Victim Advocates chose to respond was by using the #ClickSomethingElse hashtag to encourage people to steer the conversation (and clicks) away from Roosh V's blog, and toward a discussion on work being done at organizations like RVA, who are struggling amid the state budget impasse. The hacker group Anonymous also started a campaign to shut down the Return of the Kings site, and apparently succeeded Wednesday afternoon.

Ultimately, Majmudar said her organization is up for the fight when it comes to countering "evil" messages that she said people who are sexual assault survivors are faced with daily.

"I think it's absolutely necessary that the last word be of the people who believe in safety and justice and compassion," Majmudar.

Zak Linder, manager of Bar Sixty-Three at 6341 North Broadway, just steps away from the group's meeting point, said his restaurant was "absolutely against any of those types of actions."

"We create a safe and fun environment for all of our guests and would never want the students or the neighborhood to ever be harmed," Linder said. "It's appalling to hear ... and we will always stand for safe consensual sex."

In Canada and Australia, planned Tribal Meetup Day events have sparked outrage from police, the media and political leaders. 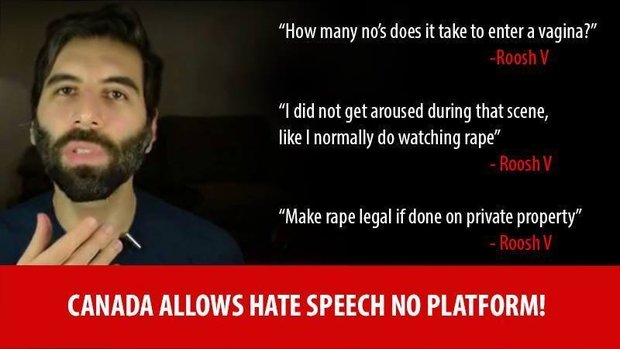 A Change.org petition to deny accommodation for Roosh V. in Canada.

In August 2015, Toronto residents gathered over 43,000 signatures to ban Roosh V. from a planned speaking event that was later moved at the last second, and in Australia, writer and media pundit Waleed Aly slammed the movement.

On Tuesday, Ottowa Mayor Jim Watson sent off a flurry of tweets that later were supported by other Canadian politicians who said Return of Kings groups were "not welcome" in their city.

Watson started the #TurnAwayReturnOfKings hashtag in response, prompting others to apply it to their own cities.

.@ReturnofKings Your pro-rape, misogynistic, homophobic garbage is not welcome in Ottawa #its2016 #TurnAwayReturnOfKings

Residents in the United Kingdom have also called upon their elected officials to ban the group's leader from the country.

Even in Texas, Governor Greg Abbott slammed the group in a statement:

“This pathetic group and their disgusting viewpoints are not welcome in Texas. I’ve spent much of my career protecting women from such vile and heinous acts, and it won’t be any different on my watch as Governor.”

One major point of contention in Australia and the UK has been Roosh V's refusal to speak with journalists who are women, unless the women are willing to offer sexual favors in return. He's also started a forum calling on his followers to share the names, photos and locations of female journalists covering his meetups.

Celebrities who have caught wind of the gatherings have also weighed in, including "Chicago PD" actress Sophia Bush, as well as Kristen Bell.

i hope noone actually gets confused and goes to the pet shop. SOMEBODY WARN THE PET SHOP. https://t.co/c1cenjZm6n

A counter-protest run by a Chicago feminist group will kick off Saturday at 7:45 p.m. Those interested should meet at The Coffee Shop at 1135 W. Sheridan Rd., according to a Facebook event listing.

Many of you may be aware that a non-Loyola-affiliated organization has announced plans to gather near the intersection of Broadway/Devon/Sheridan on Saturday evening, February 6, around 8 p.m. Campus Safety is aware of the gathering, and they have been working with the Chicago Police Department (CPD) to determine how to best respond. The organization is controversial and has caused concern, however, at this time there is no direct or specific threat towards the University community.

I want to thank the concerned members of our community for reaching out to Campus Safety, and other offices, to report the scheduled event. Your safety and well-being continues to be a top priority for this University, and it is extremely helpful when community members go the extra mile and look out for each other. As always, please remain aware of your surroundings, and please report suspicious activity immediately. You can report any issues to Campus Safety at 773.508.6039 or the Chicago Police Department via 9-1-1.

We are disheartened that a gathering like this is scheduled to take place so close to our campus. We strive to create a safe and welcoming environment for all, and we encourage anyone who has been triggered by this gathering to utilize the many resources that are available on campus, including the Wellness Center, Campus Ministry, Dean of Students office, and more. Anyone who is in need of immediate support should contact the Loyola Sexual Assault Advocacy Line at 773.494.3810.

From: Message from the VP for Student Development <umc@luc.edu>
Date: February 2, 2016 at 8:17:41 PM CST
To: Undisclosed recipients:;
Subject: Additional Details

I want to follow up on my earlier e-mail to provide some additional information, as we have received a handful of inquiries seeking more specifics. Please know that my intent earlier was to prepare you for, and call attention to, a controversial event happening Saturday evening near the Lake Shore Campus, while also being careful not to trigger anyone who may be a survivor of sexual assault.

For those who are seeking more information on the gathering, which is being hosted by a group named Return of Kings, a "men's rights" group, please see this DNAinfo article. I do want to caution anyone who reads the article, as it contains offensive and disturbing language.

I hope that this update helps and provides the additional information that some of you were seeking.