RIVER WEST — A Chicago businessman is looking at other sites to open the city's only gun store and gun range after an alderman said he would not support gun sales in River West.

Irving Park resident Christopher O'Connor is now eyeing alternative sites to open his gun shop and gun range in Chicago after Ald. Walter Burnett Jr. (27th) said this week that he would not allow a gun shop in his ward.

O'Connor hasn't given up on the River West site, but he is looking at other locations in wards that may be more gun-friendly, he said Wednesday. He plans to meet with aldermen, including Burnett, and to discuss the issue with his attorneys. He declined to discuss specific alternative spots.

"I am looking into this matter with my counsel and will start ramping up efforts to get a backup site ready for the approval process," O'Connor told DNAinfo Chicago.

Last week Burnett said he would support the gun range if residents were OK with it, since legal gun owners need a safe place to properly learn how to shoot and handle a gun. Reached this week, Burnett clarified that he was unaware O'Connor's proposal also included a gun shop.

On Tuesday, Burnett said there was "no way" he would support a gun shop in his ward.

"When [O'Connor] came to see me, I told him that he would have to get the support the community [to open the range]. I don't recall him ever talking about selling guns," Burnett said. "If that trend is going to start, it's not going to be in my ward. I don't feel comfortable with that."

O'Connor said that a gun range cannot survive without the revenue generated from gun sales.

"The gun shop and range go hand in hand," he said. "The sales from each side support the other. While the range is fine for people who already possess guns, you can't bring in new customers. ... To be a successful business it needs all the parts."

Last week, Burnett said that he would schedule a community meeting on the proposed gun range if River West and West Loop groups supported the project. He said Tuesday that he did not know O'Connor planned to sell guns at the gun range.

Despite the city's strict regulations, Burnett said he fears a gun shop in his ward could lead to more illegal guns on the streets. A gun shop may cause an illegal gun market to sprout in the area, he said.

"We have so much violence going on with guns today," he said. "The challenge is some of these gun shops [do] allow folks to buy illegal guns. I'm not accusing [O'Connor] of anything, but you never know."

Burnett said that retail use is not allowed under the area's zoning.

In addition to pursuing a special-use permit, O'Connor could apply for a zoning change, but that likely wouldn't happen without Burnett's support.

"It is throwing a wrench in the works, but will only slow, not stop, the march to getting this accomplished," O'Connor said. "Without the ability to sell firearms, the city would still be infringing on the Second Amendment rights of the citizens." 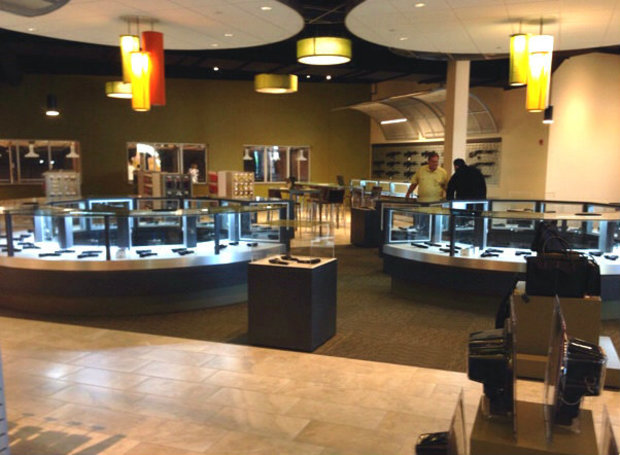 Firearms Defense Training Center, which aims to be the first gun store and gun range in Chicago since the ban was lifted, would be modeled after other state-of-the-art gun shops, including Frisco Gun Club in Frisco, Texas. [Frisco Gun Club]

Gun stores "are no longer dank, dark, smelly spots with shelves and shelves of guns," said O'Connor, 33. "This will be an accessible store. The goal is to find the right gun for you."

The gun shop would feature armored display cases and two classrooms on site.

O'Connor does not own the warehouse at 613 N. Union Ave. He is trying to lease the building with an option to buy it, he said.

An Indiana native who has lived in Irving Park for 4½ years, O'Connor has a background in hospitality and sales. He grew up shooting and hunting in Illinois and Indiana, served in ROTC in college and is a former member of the U.S. Border Patrol.

After decades of legal challenges to Chicago's strict gun restrictions, the U.S. Supreme Court struck down the city's handgun ban in 2010. In 2012, a federal appeals court struck down Illinois' concealed-carry ban, and the City Council passed an ordinance in 2014 overturning the ban.

Shortly after the city acted to comply with the conceal-carry mandate, the City Council passed a separate ordinance allowing gun stores in Chicago. Under the rules, gun stores must be more than 500 feet from a school or park.

According to the ordinance, gun stores are largely banned in all areas except some zoned commercial districts and the zoned Downtown service district area, which includes rail yards, warehouses and small businesses on the periphery of Downtown. Shooting range facilities are permitted in zoned manufacturing districts.

Before opening up shop, a firearm dealer has to apply for a special-use permit, which the city's Zoning Board of Appeals can approve or deny.

Under the city's rules, gun shop owners must videotape all gun sales and open their books for inspection by the Chicago Police Department. Gun buyers are limited to buying one gun every 30 days.

To date, no gun store has opened in Chicago.