ROGERS PARK — By summer 2017, a new "greenway" path for cyclists connecting Evanston and Edgewater could be underway.

The idea has been in its planning stages "for years," but on Thursday the 2-plus mile path was explained in detail to community members anxious to learn more about a way bring drivers, cyclists and pedestrians together.

Neighborhood greenways are "low-volume," residential streets that are made safer by adding "traffic-calming" interventions — like signs and pavement markings — which encourage all residents to travel roughly the same speed throughout the route, according to Michael Amsden, Chicago Department of Transportation assistant director of transportation planning.

Ultimately, the goal with greenways is that they "connect people via walking and riding ... via low-stress routes," and emphasize both pedestrian and cyclist safety, Amsden said.

Amsden and Ald. Joe Moore (49th) both said the proposed route was not for avid speed cyclists, but rather for families or bikers who preferred a slower, less-stressful route than other options like Clark Street or Sheridan Road.

Where Does the Path Go?

Heading north from Edgewater, the plan calls for cyclists to take a route that cuts almost directly through the middle of the ward:

• North on Glenwood from Devon to Pratt

• West on Farwell to Greenview using a contra-flow lane

• North on Greenview to Jonquil

• West on Jonquil to Paulina

• North on Paulina to Juneway

• West on Juneway to Triangle Park using a contra-flow lane

Heading south, the route is the same, but would require cyclists to ride against traffic — also known as contra-flow — for one block on Greenview Avenue between Morse and Farwell avenues.

At Thursday's meeting, Amsden broke up the route into three sections:

•Segment 1, Devon to Pratt: The path would start (or finish) just across the street from the 48th ward at Glenwood and Devon avenues. Ideally, in the future this route will connect to a bikeway being planned in Edgewater that would continue south on Glenwood. In this leg of the trip, travelers can connect to the lakefront via Albion Avenue as well as connect to nearby Loyola. Though Greenview Avenue had been considered an alternate route to Glenwood, Amsden said Greenview would have conflicted with school pick-up and drop-off times at Sullivan and Kilmer schools, and also pointed to Glenwood being the "natural" route choice for many already. During a traffic study conducted by CDOT for this project, Amsden said about 20 percent of the traffic on Glenwood were cyclists. 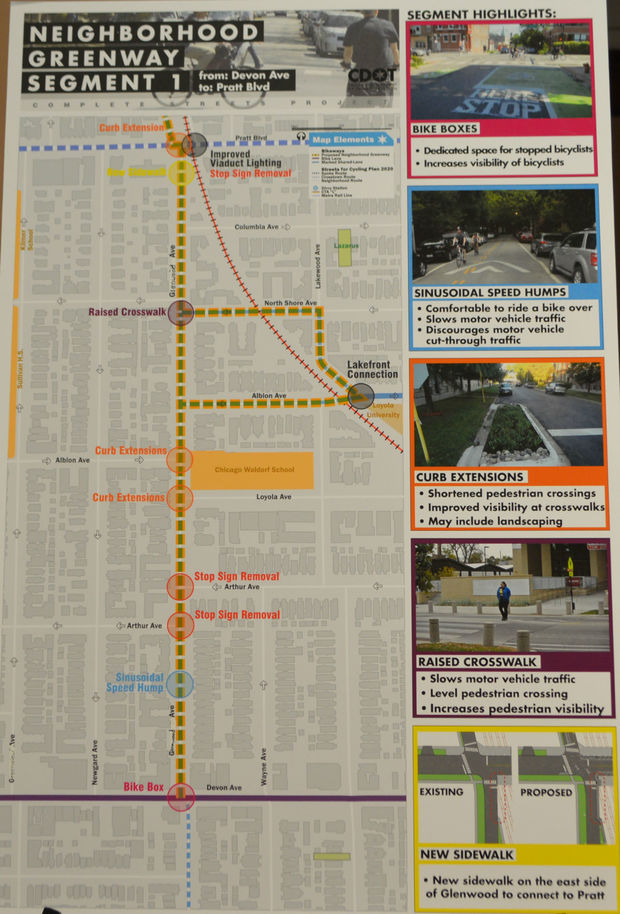 A map of segment one, from Devon to Pratt. [DNAinfo/Linze Rice]

•Segment 2, Pratt to Touhy: From here, riders can connect to Morse Avenue. They are also riding against car or truck traffic on Glenwood Avenue between Pratt and Farwell. From there, riders would continue up Greenview until hitting Jonquil Terrace to the far north. 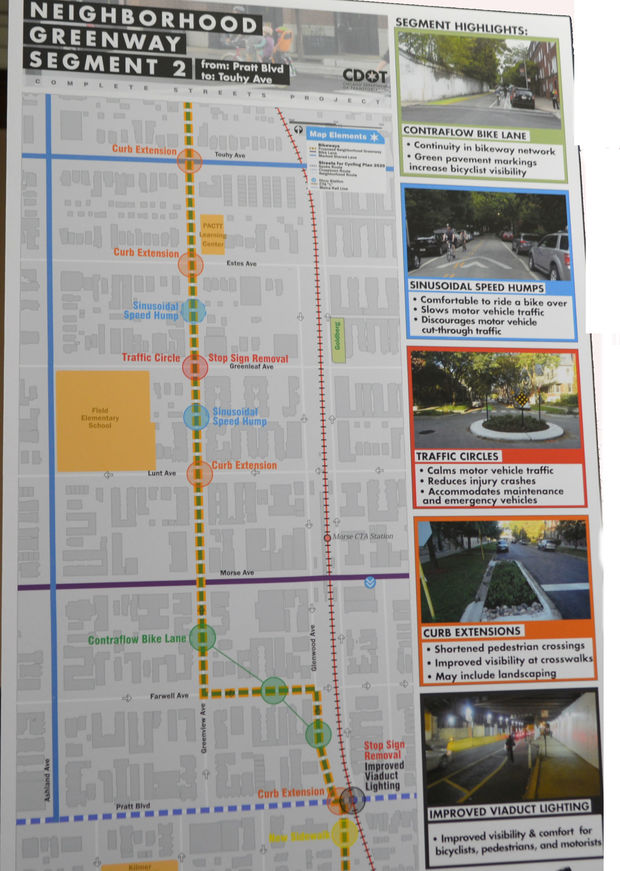 A map of section two from Pratt to Touhy. [DNAinfo/Linze Rice]

•Segment 3, Touhy to Juneway: The last, or first, leg of the trip connects riders from Chicago Avenue in Evanston (Clark Street in Chicago) to Juneway Terrace, where they'll swing by Triangle Park before syncing up with Greenview. Amsden said Howard Street was, and potentially is, considered an alternate route option. 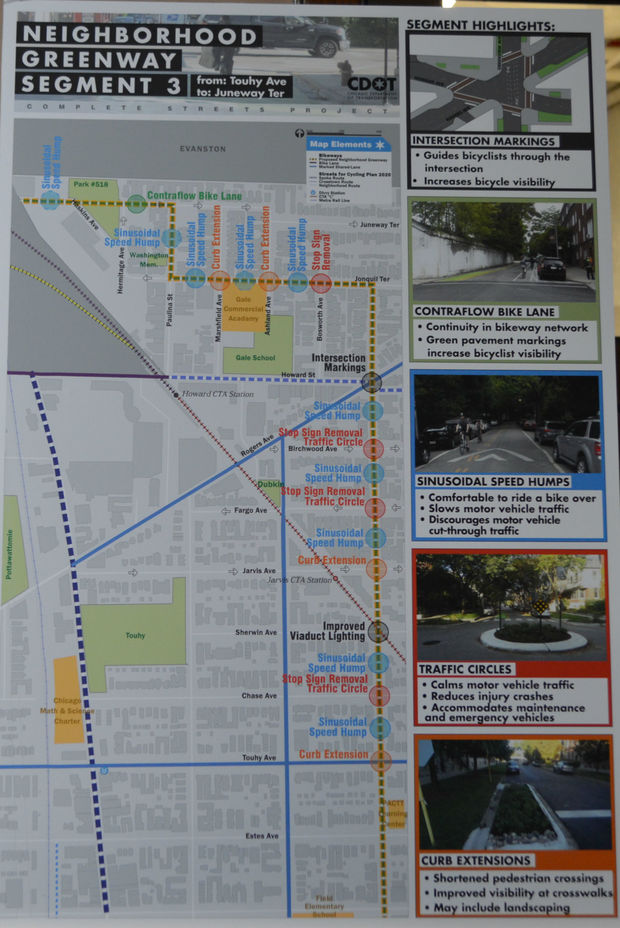 A map of segment three From Touhy to Juneway. [DNAinfo/Linze Rice]

What are the Safety Measures?

By adding things such as pavement markers, curb extensions, a "bike box," and traffic circles — and taking away a few stop signs — the overall route would ideally improve in both "flow" and safeness, Amsden said.

• Pavement Markings: These provide guidance to not only cyclists, but informs vehicles and pedestrians as well to the presence of bikers, and where and how to predict their movements. Markers signifying a shared lane, including green shared lane markers where the route shifts, and signs telling riders what direction they're going and how far they are from certain destinations will also be included.

• Bike Box: A bike box at Glenwood and Devon would allow riders to get ahead of traffic, literally, by affording them designated space at the beginning of the traffic line. This helps make cyclists more visible to cars, as well as encourages cyclists to ride in a straight line and not weave between cars. 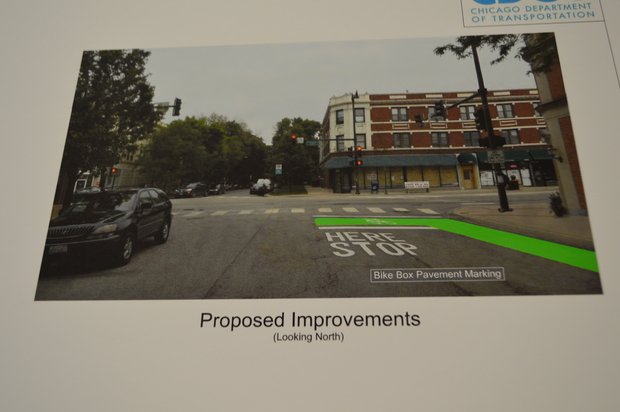 A "bike box" would allow cyclists to get ahead of traffic, increasing their visibility at intersections and throughout the route, while also encouraging cyclists to remain riding in a straight, predictable manner. [DNAinfo/Linze Rice]

• Curb Extensions: Curb extensions are primarily for pedestrian safety, Amsden said. They would be placed throughout the route and bump out the curb so foot traffic is more visible to cyclists and cars alike.

• Traffic Cirlces: Traffic circles at proposed intersections would also require the removal of several stop signs. Amsden said according to CDOT's data, the majority of people either don't stop or roll through many greenway route stop signs as it is, and said traffic cirlces can be a safer alternative. Signs will direct riders to go to the right of the traffic circle, whether they plan to go straight or turn left — though Amsden said Chicago is one of the few places where turning left at a traffic circle is technically permitted.

• Speed Humps: Sinusoidal speed humps would be placed in several places. They have a lower profile than regular speed humps and are used to slow both cyclists and cars down to about 12 miles-per-hour — encouraging all street traffic to drive a similar speed, Amsden said.

• Raised Crosswalks: At least one raised crosswalk is proposed near Sullivan and Kilmer schools. The crosswalk would be slightly elevated to highlight the presence of pedestrians, Amsden said. 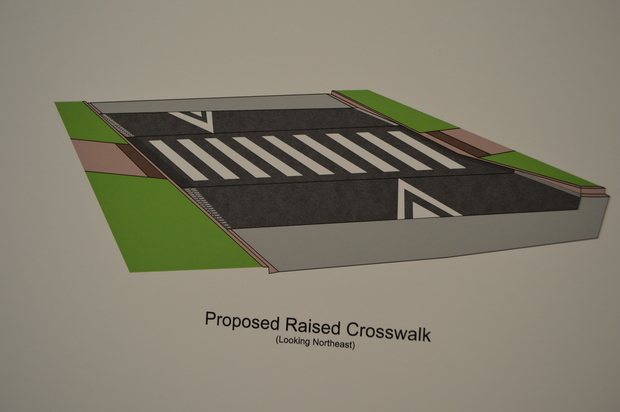 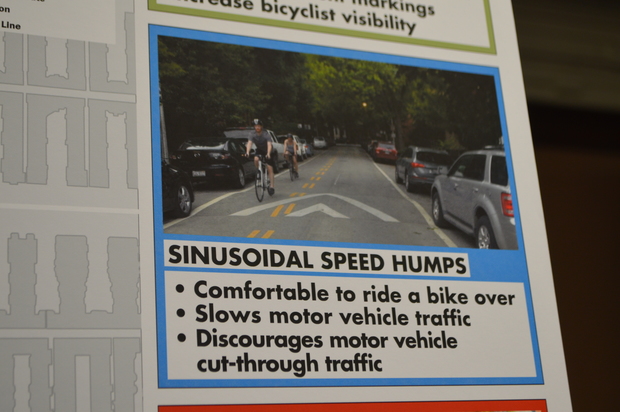 Speed humps added throughout the route would be smaller than regular speed humps, encouraging drivers and cyclists to slow to about 12 miles-per-hour. [DNAinfo/Linze Rice] 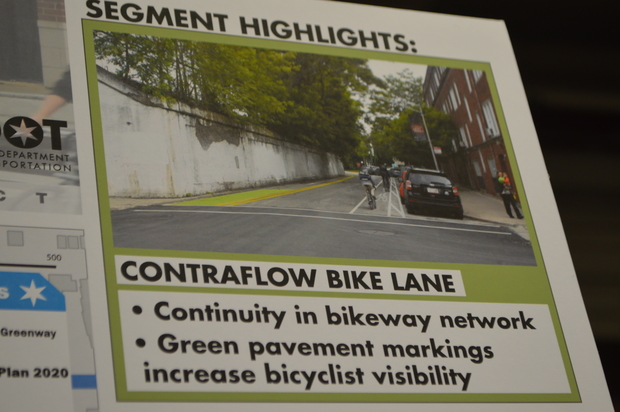 An example of the markings on the pavement guiding travelers through the contra-flow sections of the route on Glenwood Avenue. [DNAinfo/Linze Rice]

• Speed Limit Signage: In the city of Chicago, unless otherwise posted the citywide speed limit is 30 miles-per-hour. Amsden said along the route, CDOT would put up several signs indicating a 20 mile-per-hour speed limit that would help "calm traffic."

• Stop Signs: In eight locations, the proposal calls for the removal of stop signs. Four are in typical intersections that would have traffic circles, three would be at "T"-intersections and one would be off an alley where a stop sign already exists.

• Contra-flow Lane: Contra-flow lanes allow cyclists to ride against cars and trucks on one-way streets, effectively making them two-way. Amsden said yellow center lines would be painted to emphasize to cars the space would be shared, and include some green pavement to direct riders of the correct way to go. Signage would also be posted alerting both drivers and cyclists of each others presence.

While some residents expressed displeasure with the proposal, many said they were in favor — yet had pause on some of the use of Glenwood Avenue and other aspects of the project.

The narrowness of Glenwood was a major complaint, as well as questioning how well cyclists would obey traffic laws and car drivers would understand traffic circles.

The loss of any potential parking was also brought up, to which Amsden acknowledged only a "handful" of spaces would be lost.

Amsden also said CDOT would work with the neighborhood Streets and Sanitation department to ensure the route stayed plowed in winter months, and said his office is still open to hearing specific nuances about the route from neighbors.

Several residents praised the plan, with one woman saying she'd ridden it earlier in the day as a "test" and had approved. Another man called the plan a "profoundly stupid idea."

Moore and Amsden said they will both continue to gather feedback and work with engineers and designers to make any "tweaks" necessary before possibly regrouping with another community meeting.

By spring or summer of this year, the approval and planning stages of the project should be complete, Amsden said.

One aspect that slows the process down is the fact the project is receiving approximately 80 percent of its financial support via a federal Congestion Mitigation and Air Quality (CMAQ) grant, which "takes time," Amsden said. The additional 20 percent comes from Moore's aldermanic menu funds, about $1 million of which he sets aside each year and lets voters choose how to spend the money on improvement projects throughout the ward.

In late 2016 or early 2017, Amsden said he'd like to see all of the design work complete, and by summer 2017, the installation process can begin.

Bicyclist Hit With Drum Starts GoFundMe To Pay For Braces