SOUTH LOOP — George’s Cocktail Lounge, the late-night South Loop dive known for its graffiti'd exterior, has shut its doors as a developer prepares to tear it down for high-rise apartments.

George’s, 646 S. Wabash Ave., will soon make way for a 16-story, 134-unit tower at Wabash and Balbo avenues. Planned by Providence, R.I.-based Gilbane Development, the Solomon Cordwell Buenz-designed building dubbed "30 East" will include residences ranging from studios to four-bedroom apartments. The name refers to the building's future address, 30 E. Balbo, as Gilbane hopes to attract students attending nearby colleges and other young people.

"We have tailored our amenities and floor plans to the needs of today’s student/millennial renter," Robert V. Gilbane, the developer's chairman and CEO, said in a statement. "And our site’s proximity to the South Loop’s multiple colleges and universities, convenient access to the area’s major transportation links, and a wealth of nearby cultural and retail destinations make 30 East an ideal community for those seeking an active urban lifestyle.” 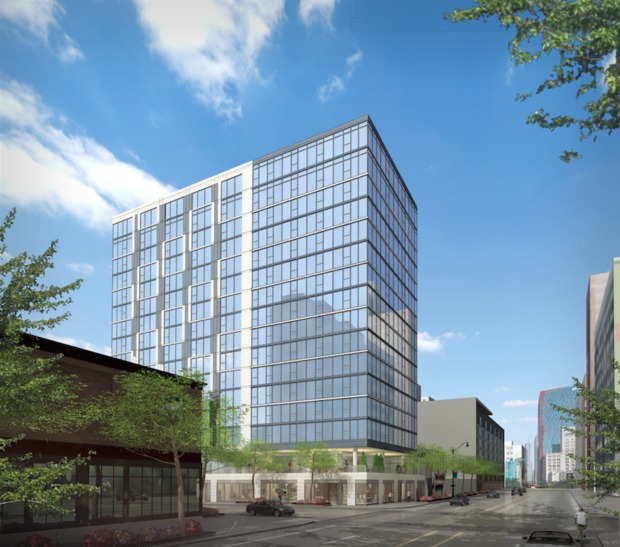 A rendering of the 30 East tower. [Solomon Cordwell Buenz]

The tower is the latest addition to a South Loop construction pipeline replete with new residential towers as developers aim to court people priced out of more established Downtown neighborhoods. Demolition of George's and an adjacent, closed Harold's Chicken Shack will begin later this month, and the new tower is expected to open in August 2017, said Wes Cotter, a Gilbane spokesman. He declined to disclose how much rent at 30 East will cost.

The development means the end of George's Cocktail Lounge, one of the South Loop's first, and only, late-night destinations. Adorned with graffiti and connected to a parking garage, the bar's Yelp reviews are equally colorful. Bartenders and other George's staff repeatedly declined to comment in the weeks leading up to the bar's closure this week. Cook County property records show a venture led by Gilbane paid $3.85 million last year for the site.

Once built, the tower will include street-level retail and amenities including a club room, gym, gaming and study rooms, and outdoor terraces. The apartments will be fully furnished, include washers and dryers, and the building will offer a roommate matching service, among other services, Gilbane said.