CHICAGO — It was the "failure to ignite" felt across Chicago.

Well documented in headlines and by a crowd of tens of thousands who braved cold, gloomy weather expecting a spectacle, the inaugural Great Chicago Fire Festival last October was considered at best a failure and at worst a fiasco.

When the floating constructions fashioned after Victorian mansions didn't burn brightly on the Chicago River as promised — the intent was to represent the city's rebirth after the Great Chicago Fire in 1871 — the disappointed crowd turned to chanting: "We want fire."

Despite the very public fire fail last year, organizers Redmoon Theater in Pilsen are determined to move on from the depressing launch. On Saturday, Redmoon will take another stab at presenting The Great Chicago Fire Fest, now a less expensive festival on dry land at Northerly Island.

Jim Lasko, executive director of Redmoon Theater and the man who bore the brunt of the heat after last year's fizzle, said organizers have learned from the very public mistakes made last year. This year's festival will be different, Lasko said, and hopefully forge a positive path for the future of The Great Chicago Fire Fest.

"Those houses will light, and it will be spectacular," Lasko said. "And more than that, we won't fail to highlight the neighborhood voices that made the festival so spectacular in the first place."

From 5-9 p.m. Saturday, the Fire Fest at Northerly Island will feature a neighborhood bazaar with dozens of local artisans, four performance stages showcasing talent from the city's neighborhoods, interactive experiences and food trucks. The fest will conclude with the burning of structures, a symbolic rebuilding of the skyline, and a fireworks finale.

Members of the Chicago Civic Orchestra, the Chicago Children’s Choir, the Chicago Bulls Stampede Drumline, The Chicago Chamber Choir, The Happiness Club and After School Matters Hidef Dance Ensemble are among those slated to perform Saturday. 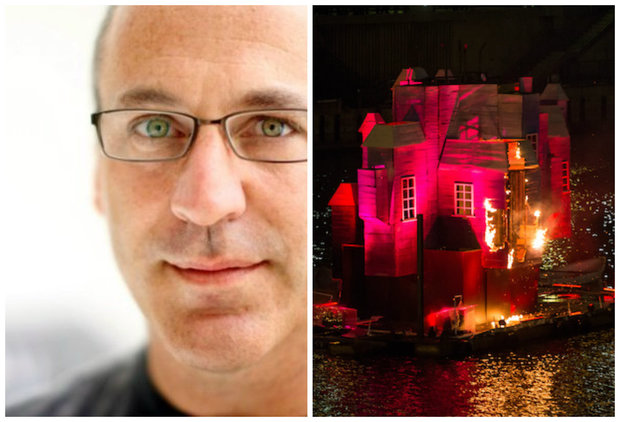 Left: Jim Lasko, executive director of Redmoon Theater, organizers of the Great Chicago Fire Festival; Right: A house on the Chicago River that failed to ignite during the inaugural event. [LinkedIn; Justin Barbin]

Lasko called the circumstances that led to the failure to ignite at the first annual Great Chicago Fire Festival "a perfect storm."

The full-scale constructions were supposed to burst into flame, but the fest ultimately produced only small fires.

Staging the Great Chicago Fire Festival's closing ceremony on the Chicago River meant organizers had to adhered to strict environmental regulations, limiting the types of fuels that could be used to spark the fire and the materials that were used to build and tarp the displays. On top of that, organizers faced record cold temperatures and wet weather that made it impossible for the houses to burn, Lasko said.

"We had some real trouble with a pretty complex ignition system that was designed around safety," he said.

After the fail, Lasko addressed the public flame out in a Chicago Tribune editorial and in a TED talk.

It's also a better setting for the festival's live entertainment lineup as well.

Before last year's closing ceremony — the planned visual fire display on the river — the festival hosted live music and other performances. But because the stages were spread out across several blocks along Upper Wacker Drive, it made it difficult for attendees to enjoy all of the activities, Lasko said.

"This year, you can see the programming that was created in the neighborhoods," Lasko said. "It's much more accessible." 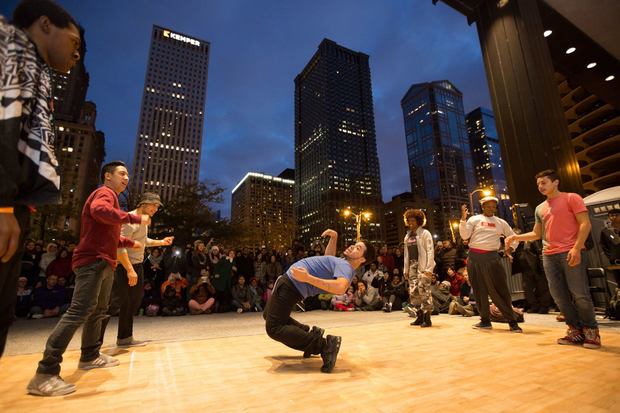 Lasko says the closing ceremony's "failure to ignite" not only cast a cloud over the entire fest, it also made it much more difficult to raise money in second year.

Calling the inaugural fest "a fiasco," Ald. Edward Burke (14th) questioned the amount of public money that was spent on the display just days after the event. The city paid Redmoon $350,000 over two years to plan, promote and perform at the fest, according to city officials.

In late October 2014, the city's Department of Cultural Affairs and Special Events confirmed the fest would return.

In total, the 2014 festival cost about $2 million to produce; this year's fest is expected to cost less than $1 million, Lasko said.

The city contributed a sizeable chunk of the fest's funding last year: $350,000. This year, the city committed $100,000 to the fest, Lasko said, forcing organizers to rely heavily on individual donors and corporate and foundation sponsors like Allstate Insurance, the Pritzker Foundation and The National Endowment for the Arts.

Redmoon has also launched a Kickstarter campaign to help fund performances and other activities at the fest. With a goal of $25,000, the online campaign had raised $13,500 as of Monday night.

The funds will go directly to the hundreds of artists slated to perform at the fest, including the Chicago Children's Choir and The Happiness Club.

Despite his optimism, Lasko admits that he's still "extremely nervous" ahead of Saturday. If all goes well, the night will launch "a tradition in Chicago that gives the neighborhood residents and community organizations a big platform at a marquee location" for years to come, he said.

"I would be lying if I didn't admit I was extremely nervous," Lasko said. "I'm nervous but excited. I think the concept is really strong, the hunger is there and the pieces are all in place for a great evening."

Katrina Flores, Redmoon director of community arts, said she is confident the city's residents will give Redmoon's biggest fest — a celebration of neighborhoods and all that is great about Chicago — a second chance.

"Chicago is built on second chances," Flores said. "We're excited to take our second chance to build on what we did last year, come back stronger and provide the city a true platform to celebrate the things that make Chicago unique and Chicagoans unique."