JEFFERSON PARK — Cook County Commissioner Jesus "Chuy" Garcia took his campaign for mayor to the Far Northwest Side Friday in attempt to turn residents' anger about jet noise in their neighborhoods into votes.

Garcia blasted Mayor Rahm Emanuel for failing to meet with members of the Fair Allocation in Runways Coalition and heed their cries to do something about the noise they said have made it impossible to sleep, spend time in their backyards, play in neighborhood parks or watch television.

"The important thing is to show your face," Garcia said, surrounded by supporters waving signs outside Wilson Park, 4630 N. Milwaukee Ave., where a plane typically flies over every 3½ minutes, according to data released by the Chicago Department of Aviation. 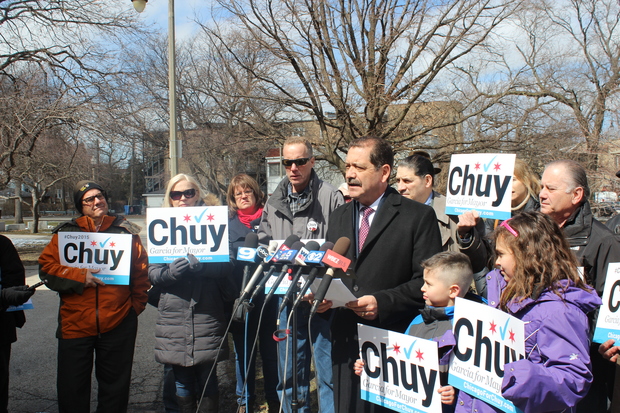 Garcia acknowledged that he may not be able to achieve everything on the list of demands from the anti-O'Hare noise group, but said he would listen to their concerns and pick an aviation expert to lead the city's Department of Aviation who is a "good listener."

"I applaud the residents for taking the lead," Garcia said. "I'm concerned that your complaints have fallen on deaf ears."

Garcia, who called the noise "unbearable," said he would push the Federal Aviation Administration to require planes to travel over the Northwest Tollway, industrial areas and forest preserves rather than Northwest Side neighborhoods.

Lisa Ziems, a member of the coalition who introduced Garcia, said she has a hard time reading a bedtime story to her kids in their east-facing rooms in her Hollywood-North Park home because of the unrelenting racket from planes using O'Hare's new east-west runway.

Emanuel has said the O'Hare Modernization Plan — designed to make airport operations safer and more efficient — is crucial to ensuring Chicago's growth by keeping the airport among the busiest in the world, encouraging both business travelers and tourists to visit Chicago.

The new runway allows planes to take off and land without crossing paths with other jets while on the ground, which aviation officials said are designed to reduce delays and increase safety.

Emanuel has called for the FAA to speed up a study that could allow more homes to qualify for subsidized soundproofing, such as new attic insulation, air conditioning, exterior doors, storm doors and windows that block all noise. It is expected to be completed in mid-2016.

In addition, the city plans to install five new noise monitors throughout the Northwest Side to measure the noise created by the jets.

"The mayor has the wrong priorities," Garcia said, pledging to develop a "comprehensive, neighborhood-based plan" that puts "equitable, long-term solutions" in place.

Before Garcia's news conference, Emanuel said in response to a reporter's question at a separate event that he had met with with residents and "all the aldermen in the affected area."

Ziems said the mayor's statement was false. The coalition has asked the mayor to meet with them 13 times, and the mayor has never responded, she said.

"We've asked and asked," Ziems said. "We've been so frustrated on the Northwest Side. We're outraged."

The 41st Ward has the highest number of early votes cast through Thursday evening, with the 45th Ward not far behind in fourth place. Both wards include neighborhoods that rarely heard a plane traveling to or from O'Hare before the new east-west runway opened in October 2013, and residents have filed thousands of complaints with city officials during the last 2½ years.

Ald. John Arena (45th) attended Garcia's event, and said after the event Emanuel has refused to meet with him to discuss O'Hare noise and has failed to respond to any of his letters on the matter. Arena, a frequent opponent of Emanuel, is officially neutral in the mayoral race.

Anger about the noise is one of the reason for the increased turnout — and could fuel to Garcia's victory, Arena said.

Garcia said O'Hare officials should not decommission any of the diagonal runways now in use at O'Hare to preserve as many options as possible for flight paths.

"There is more that can be done," Garcia said. "Viable alternatives exist."

In the first round of voting, Garcia's strongest showing on the Far Northwest Side was in the 39th Ward, where he won 37 percent of the vote. Those neighborhoods have been among the hardest hit by the airplane noise, based on the number of complaints filed with city officials.

The Far Northwest Side was a stronghold for third-place finisher Ald. Bob Fioretti (2nd), giving Garcia an opportunity to win over his supporters in the April 7 runoff. Fioretti won 15 percent of the vote in the 38th Ward, 10.5 percent in the 39th Ward and 13 percent of the 45th Ward.

Chicago Has A 60-Year-Old, Ice-Breaking Tugboat That's Still In Use

For Tom Skilling, Living In Edgewater Is A Weatherman's Dream